The COVID-19 pandemic has negatively impacted several markets across the world, and it has also impacted the demand for epilepsy devices. Several studies showed that 8–35% of patients were experiencing increased seizures, which increased the demand for epilepsy devices. However, governments across the globe have imposed restrictions such as lockdowns, which have hampered the market demand. Several government organizations had paused elective EEG diagnosis procedures. For instance, the Italian Society of Neurophysiology, the Italian League Against Epilepsy, the Italian Association of Neurophysiology, and the International Federation of Clinical Neurophysiology had passed such regulations. The diagnosis of diseases has been hampered due to the government restrictions as well as due to fear amongst patients in contracting the virus. According to Wayne State University, in January 2021, there was a 90% decline in EEG procedures in a survey of 212 pediatric neurologists in 49 countries. However, as the restriction are being relaxed across the globe, the demand for epilepsy devices have increased again and the overall; Covid-19 impact seems to be of short term.


Studies have shown that older adults are at more risk of suffering from epilepsy. According to National Center for Chronic Disease Prevention and Health Promotion, US, older people are at a higher risk of epilepsy as side effects of neurological disorders such as stroke and Alzheimer’s, increased risk of head injuries due to falls, and brain tumors. In another report by the Centers for Disease Control and Prevention (CDC), US, in August 2020, about 3 million people have epilepsy in the US; out of them, 1 million people are aged 55 years and older. Therefore, the growing prevalence of epilepsy in older people is driving the market growth.


Epilepsy is a chronic disease that affects the brain and can happen to people of any age. It affects over 50 million people worldwide, according to WHO in June 2019. They further stated that almost 80% of people affected by epilepsy belong to low- and middle-income countries. Around three-quarters of the epilepsy patients living in such counties do not receive the required diagnosis monitoring and treatment for epilepsy. Unfortunately, many of these low- and middle-income countries do not have access to proper healthcare infrastructure and hence, do not have access to epilepsy devices which is hampering the growth of the market as a high proportion of the people who could have been potential end users are not able to access the market.


Emerging markets such as Asia-Pacific are expected to drive the market in the future. According to the World Health Organization (WHO), over 80% of people with epilepsy reside in low- and middle-income countries as of June 2019. Furthermore, according to the Royal Melbourne Hospital in Australia, around 23 million individuals in Asia have epilepsy, which accounts for almost half of the world's epilepsy prevalence. 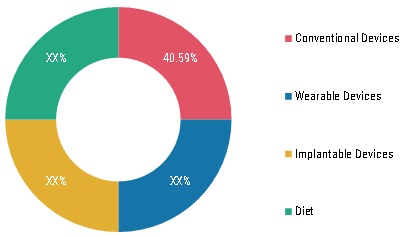 The global epilepsy devices market is growing steadily and is expected to continue growing at the same rate in the near future. This is due to the growing contribution of existing players to make the product available to the public and the rising prevalence of epilepsy disorder. The supply chain analysis for the epilepsy devices market comprises five major components: the research and product development followed by manufacturing of the products, distribution, sales, and post-sales services.

The global epilepsy device market has been divided based on product type, technology, seizure detection and prediction devices, and distribution channel.


Conventional devices refer to the electroencephalogram (EEG) devices used for continuous monitoring of the patients. According to WHO, proper etiology documentation and an abnormal EEG pattern are the most accurate predictions for seizure recurrence. Hence, there is a huge demand for EEG devices for monitoring epileptic patients.


The wearable devices segment has been further bifurcated into watches, bracelets, camera devices, mattress devices, anti-suffocation pillows, and others. Symptoms of seizures might differ from one person to the other. Even though there is no immediate way to stop a seizure, rapid advancements in wearable epileptic device technology have gained substantial popularity in recent years.


Majority of the patients are now treated with implantable devices. Vagus Nerve Stimulation (VNS), Deep Brain Stimulation (DBS), and Responsive Neurostimulation (RNS) are three types of neuromodulation therapies approved by the FDA, which are achieved through the use of implantable epilepsy devices.


Dietary therapy is mostly done with conjuncture with seizure medications. A physician and dietitian prescribe and supervise the conventional ketogenic diet, a high-fat, low-carbohydrate diet that can help manage seizures in certain patients.

On the basis of technology, the market is divided into Vagus Nerve Stimulation (VNS), Responsive Neurostimulation (RNS), Deep Brain Stimulation (DBS), and accelerometry.


Vagus Nerve Stimulation (VNS) is an FDA-approved therapy for adults and children with refractory epilepsy or medication-resistant epilepsy. It is a neuromodulation method in which mild electrical pulses to send to the brain through the vagus nerve.


Deep Brain Stimulation (DBS) is used when medicines become ineffective for the patient and are designed to modulate how the brain works with the help of electrical stimulations sent to the brain areas involved with epilepsy.


Accelerometry is a technology which helps detect seizures which are related to abnormal movements and motor phenomenon. Accelerometers are used extensively on wearable epilepsy devices, which helps in the detection of seizures. There are also wireless accelerometry solutions that work as a viable alternative to conventional EEG for seizure detection as they provide the patient the freedom to move around.


Responsive Neurostimulation (RNS) is a ground-breaking surgical technique for treating       seizures that are resistant to medication. A neurostimulator is implanted beneath the scalp and within the skull, and is connected to two electrodes put on the brain's surface, inside the brain, or a combination of both.

By Seizure Detection and Prediction Devices


Electroencephalogram is the most common method and an important technique for detecting epilepsy. The process is safe and painless and uses electrodes that are attached to the scalp. These electrodes detect the brain's electrical signals, and the EEG devices check whether the brain signal patterns are normal


In Intracranial EEG, the surgeons place the electrodes inside the skull to record the brain activity. This is generally done only when epilepsy medication has failed, inconclusive data is received from scalp EEG, or different tests show conflicting results. This method also helps doctors pinpoint the part of the brain that is causing the seizures, and if possible, remove that brain tissue.


Tonic-Clonic Seizures (TCS) are the most common type of seizures observed. There is also a higher risk of Sudden Unexpected Death in Epilepsy (SUDEP) from Bilateral (generalized) TCS. Surface Electromyography helps in the detection of TCS; sEMG can be used effectively to differentiate between TCS and convulsive nonepileptic seizures.


Video detection systems generally work along with EEG monitoring VEM (Video EEG Monitoring) to concurrently capture a patient's behavior and electrical activity in the brain (EEG). It is done with specialized equipment that records EEG, video, and sound onto a computer for analysis.


Electrodermal activity (EDA) is an important marker for the detection of epilepsy. According to a report by Hokkaido University Graduate School of Medicine, Japan, in Nov 2019, there was a significant decrease in EDA levels in patients with epilepsy compared with healthy individuals. The Embrace seizure monitoring watch by Empatica (US) is one such device that monitors the EDA levels in epileptic patients along with other factors for detecting seizures.


Seizure prediction might be clinically valuable in epilepsy patients since it would boost safety and independence and allow for immediate treatment. With the help of implanted advisory systems, it is possible to predict seizures.

On the basis of end user, the market is divided into hospitals and clinics, neurology centers, home care settings, and others.


Hospitals and clinics are expected to register significant growth during the forecast period due to the availability of epilepsy devices and patients' preference to visit hospitals & clinics. Moreover, the gradual rise in the number of government & private hospitals worldwide is driving the growth of this segment.


The home care settings segment is expected to account significant growth rate in the forecast period due to the increasing innovations in wearable technologies for epilepsy monitoring and increasing demand for monitoring seizures at home.


Ambulatory surgery centers, rehab centers, and nursing homes are some of the other end users where epilepsy devices are used. 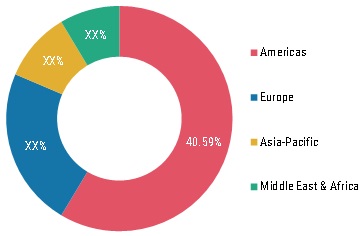 The global epilepsy device market, based on region, has been divided into Americas, Europe, Asia-Pacific, and Middle East and Africa.

Developed healthcare infrastructure, favorable government policies, the presence of headquarters of major key companies in the region such as Boston Scientific Corporation and Empatica, Inc., and rising epilepsy cases are driving the market in the region. According to Healthline Media (US), in May 2019, one in 26 people in the US are diagnosed with epilepsy once in their lifetime, and 1.2% of the US population have active epilepsy, accounting for around 3.4 million people. After migraine, stroke, and Alzheimer's disease, epilepsy is the fourth most common neurological disorder in the US.

Furthermore, the key players in the region are spending extensively in R&D to develop new products and are getting new product approvals. For instance, in February 2021, BioSerenity, Inc. (France) got the FDA approval for the Neuronaute EEG System and IceCap EEG wearable device, which can monitor epilepsy patients remotely.

Europe accounted for a sizable portion of the global epilepsy device market. The European epilepsy devices market is expected to grow during the forecast period owing to reimbursement availability, growing geriatric population, and technological advancements in therapeutic devices. According to Eurostat, in July 2020, the population of older people (aged 65 yrs. plus) is expected to increase from 90.5 million in 2019 to 129.8 million by 2050 within the EU-27. There is a higher risk of epilepsy for older people, and hence the growing geriatric population is a driving factor for the epilepsy devices market.

Asia Pacific is the fastest-growing regional market for epilepsy devices market as it is developing rapidly and has witnessed the emergence of many new players. Moreover, high prevalence of epilepsy in the region is boosting the market growth. According to WHO, in June 2019, nearly 80% of people who have epilepsy live in low and middle-income countries. Another report published in April 2020 by Lady Hardinge Medical College, India, stated that around 50 million individuals have epilepsy globally; one-sixth of them reside in India, accounting for around 10-12 million people.

The epilepsy devices market in the Middle East and Africa is expected to witness restricted growth due to a lack of public awareness and limited affordability among the population. However, the market growth in the Middle East & Africa region is attributed to increasing public health awareness and government initiatives to introduce advanced technologies into the region. There is also a high prevalence of epilepsy in the region, which is not properly addressed. According to a report by the University of Washington, US, epilepsy is the second most common neurological disorder after stroke In the South-African region.

Scope of the Report & Segmentation

Growing Prevalence Of Epilepsy Amongst The Geriatric Population Is Anticipated To Fuel The Growth...