Epichlorohydrin Market Information - by Application (Epoxy Resins, Synthetic Glycerin, Water Treatment Chemicals, and Others), By End User (Automotive, Electronics, Textiles, Pharmaceutical, Construction Industry, and Others) and by Region - Forecast till 2030 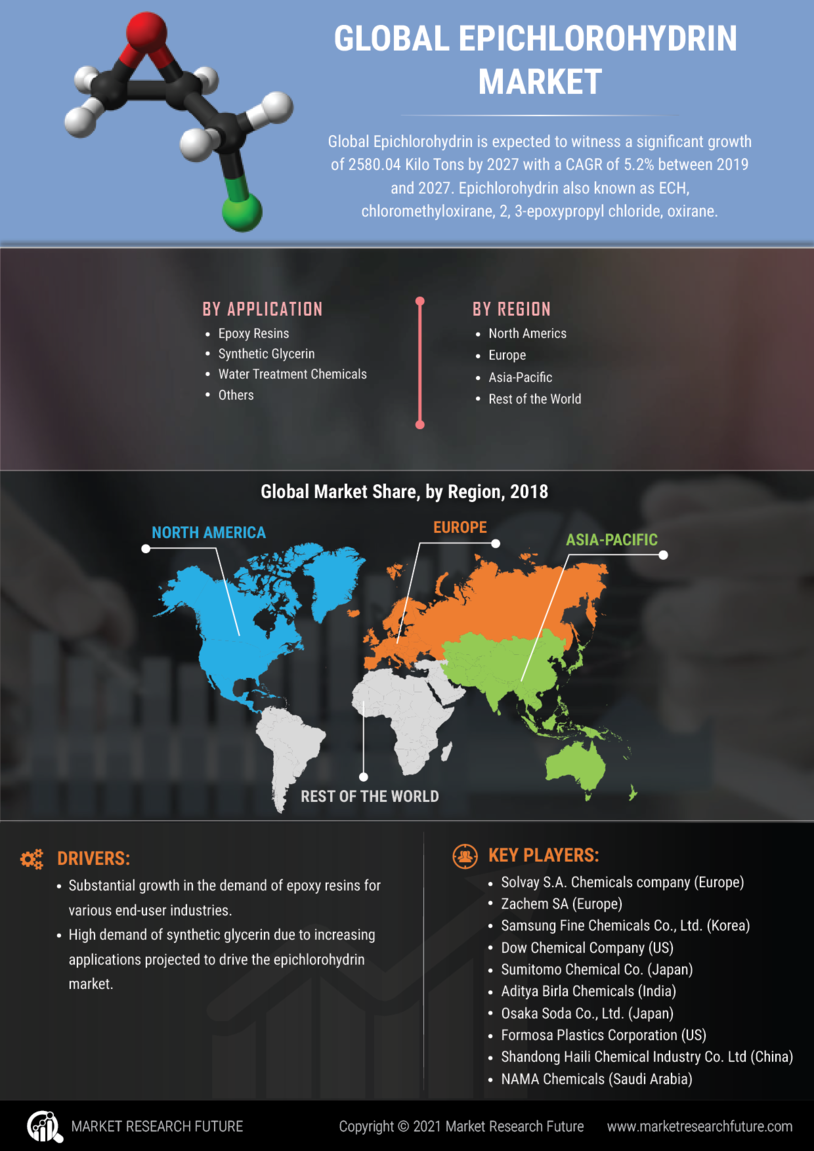 The rising use of epoxy resins in the construction, automotive, aerospace, and other important industries is driving the product demand. Epoxies are also widely used in flooring to provide great chemical and abrasion resistance, protection from wear, and slip resistance. According to EPOXY Europe, the largest end-user segment in Europe is the construction industry, accounting for 22% of revenues for epoxy resin producers. In 2017, 93,000 tons of epoxy resin were sold to the Europe construction industry. The requirement for water treatment chemicals and ongoing expenditures in wastewater treatment infrastructure will further fuel demand for epichlorohydrin. The worldwide epichlorohydrin market will be strengthened by the increased use of epichlorohydrin-based rubber in the automotive sector. A specialized, multifunctional polymer called ECH-based rubber is used in fuel applications such as automotive fuel systems, die-cut sealing, and bladders. Another important area where ECH is used as an intermediary is synthetic glycerin. However, the market expansion will be hampered by the government's strict emission requirements and controls imposed on the manufacturing of the chemical.

The COVID-19 pandemic has disrupted the world economy by stopping operations in the building, automotive, electronics, and textile sectors. Due to a workforce shortage brought on by the global lockdown, industries were forced to shut down their power plants. In addition, the supply chain disruption has decreased demand for consumer items like electrical appliances. However, since the pharmaceutical sector is the only one fully operational during this crisis, it is projected that the use of epichlorohydrin in this sector will increase demand for the product.

The major key players in the Epichlorohydrin Market are:

The covid-19 outbreak has affected the global economy highly, and starting from small businesses to large-scale businesses are highly affected due to this virus. The government has imposed a lockdown in many countries to fight against the virus, and social distancing has also been imposed by the government to stop the fast-spreading of covid-19. Due to this, many countries are going through shut down, and the production of products is at a halt. Due to low production in many sectors, the demand for epichlorohydrin has decreased. Further, the construction work had stopped in almost all regions as paintings and coatings contribute highly to the market that is why the epichlorohydrin market demand is hampered. The key players are trying their best to boost the market demand, but the market is expected to see growth after the post-covid-19 situation.

Epichlorohydrin is highly used in the construction sector for painting and coatings. And the need for infrastructural growth with the growing economy and government initiatives to provide better Infrastructure will bring opportunities to the market. People are building Residential places due to a better economic state, and it is contributing to the epichlorohydrin market size growth. With the increasing population, the automobile sectors are growing, and with it, the need for paints and coatings is also increasing. And it brings new opportunities to the epichlorohydrin market.

Epichlorohydrin has a wide range of applications in the manufacturing of different products. As a result, the market will grow rapidly in the forecast period. Epichlorohydrin is used to make paints, coatings, plastic, water filters, and other products, and due to the high demand for these products, the market will see huge growth in demand. The epichlorohydrin market size is expected to grow at a CAGR rate of 5% at the end of the year 2023.

North America holds the second-highest share in the epichlorohydrin market size due to the high demand for chemical products, capital infusion, capacity expansion, and oil exploration. The US is the major contributor in this region. Just like epichlorohydrin manufacturers in India, the presence of manufacturers in the US is boosting the market in this region. The European region holds the third position in the market due to rapid growth in the automotive sectors in this region. All these regions will show rapid growth in demand in the forecast period of the market.

Who are the major key players in the Epichlorohydrin market?

What are the major regions in the Epichlorohydrin market?

The major regions in the Epichlorohydrin market are North America, Europe, and the rest of the world.

Which region holds the highest share in the Epichlorohydrin market?

The Asia Pacific holds the highest share in Epichlorohydrin.