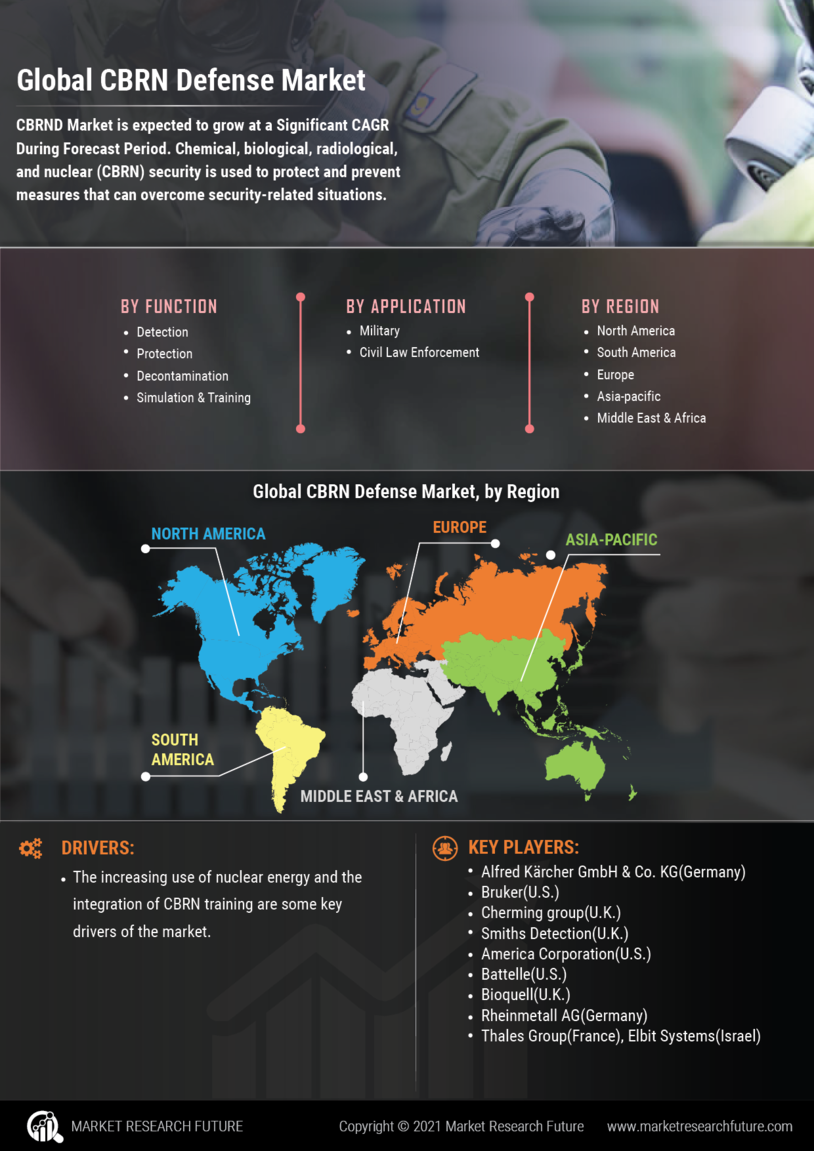 Chemical, biological, radiological, and nuclear (CBRN) security, is used to protect and prevent measures that can overcome security-related situations. CBRN security is the fast-growing market. The major challenge for this market is the protection of civilian lives and maintenance of economic stability. The multiple uses of CBRN agents today life is the major reason for the demand of CBRN protection, detection and decontamination.

A CBRN incident differs from a hazardous material incident in both scope (i.e., CBRN can be a mass casualty situation) and intent. CBRN incidents are responded to under the assumption that they are intentional and malicious; evidence preservation and perpetrator apprehension are of greater concern than with HAZMAT incidents.

Based on system, the CBRN Defense market has been divided into Chemical, Biological, Radiological and Nuclear. Chemical segment dominated the market in 2021 and is estimated to remain the same during the review period, while Biological is expected to register the highest CAGR during the forecast period from 2022 to 2030.

The global economy took a big hit because of the emergence of COVID-19 worldwide in early 2020. Several nations across the globe were forced to impose lockdowns to fight the rapidly rising number of COVID-19 infections. The lockdown meant shutting down businesses and bringing most of the economic activities to a halt. As a result, most of the economies across the world were pushed into a recession, causing the economy to shrink and growth to decline significantly. Amidst COVID-19 disruptions, millions of people across the world were fired, causing a sudden increase in unemployment worldwide. The pandemic also affected the manufacturing sector as the manufacturing output went down in several countries because of a decline in demand, both external and domestic. In terms of economic growth, the developed nations were affected relatively worse as compared to developing nations.

However, the global economy is likely to grow in 2021 due to the rapid vaccine rollout in some of the large economies, a rise in international trade, consumer behaviour normalizing, and monetary and fiscal stimuli to some extent. As per the World Bank, there will be a 4.0% increase in global GDP in 2021. Moreover, every region is subjected to considerable growth upgrades; the Middle East & North Africa to increase by 2.1%, Europe & Central Asia by 3.6%, South Asia will grow by 7.2% in 2021 and 4.2% in 2022, Latin America increase by 4.6%, and East Asia & the Pacific region is expected to grow by 7.4%. Thus, the global economy is likely to recover, and the market is going to reach pre-pandemic levels in a couple of years.


Over the past decade, the threat environment in CBRN defense has rapidly evolved. Although the occurrence of CBRN events has been rare in these past years, they have had a far-reaching impact. Having the potential to bring about fatalities on a large scale, CBRN materials and agents may weaken or destabilize governments across the world, foster terrorism, and create scenarios that fuel violence & escalate conflicts. CBRN weapons may overwhelm the response capabilities of countries, particularly in the case of those that lack preparedness and technologies & capabilities to deal with any such threats. State actors, including the Syrian regime, were also involved in CBRN agents-based attacks and threats, such as chemical attacks in Syria in 2017.

Over the recent past, some of the non-state actors have shown intent to employ these weapons but are limited by their capabilities. However, several government bodies have been trying to implement obstacles that prevent non-state actors from acquiring and weaponizing the CBRN agents and reduce the CBRN threat to a certain extent.


Over the last decade, the world has witnessed robust growth in capital expenditure from the governments of various countries to bolster their military strength. Despite the COVID-19 pandemic shock to the global GDP growth, the defense budgets and revenues are likely to remain stable during the forecast period. Most of this can be attributed to the rising geopolitical tensions & conflicts, which make the military programs critical to the national defense. According to Stockholm International Peace Research Institute (SIPRI), the global military expenditure increased to USD 1,981 billion in 2020, an increment of 2.6% from 2019.

The military expenditure of the US alone accounted for USD 778 billion in 2020, marking a rise of 4.4% compared to 2019 and a dominant share of 39.27% in the global military spending in 2020. Heavy investment in R&D and increased expenditure on long-term projects, including modernization of the US nuclear arsenal, procurement of large-scale arms, and expenditure on defense programs for tackling new emerging threats, including CBRN defense programs. In 2020, with an estimated military expenditure of USD 252 billion, China was the second-largest military spender. Despite the pandemic shock to the global GDP growth, most countries increased their military spending in 2020. Amidst the rising geopolitical tensions and conflicts, rising civil unrest, and increasing riots, the major economies are expected to continue increasing their military spending, thereby offering lucrative opportunities for the players in the global CBRN defense market during the forecast period.

The CBRN Defense Market has been segmented based on type, system, application, function, and region.

Based on Type, the global CBRN Defense market has been segmented into Chemical, Biological, Radiological and Nuclear.

Based on Application, the global CBRN Defense market has been segmented into Military and Civil Law Enforcement.

By Function, the CBRN Defense market has been segmented into Protection, Detection, Decontamination and Simulation & Training.

Globally, the CBRN Defense market has been categorized into five different regions—North America, Europe, Asia-Pacific, Middle East & Africa, and Latin America. North America accounted for the largest market share, with a market value of USD 5,003.4 Million in 2021; it is expected to register a CAGR of 5.07% during the forecast period. Europe was the second-largest market in 2021, valued at USD 4,270.5 Million; it is projected to register CAGR of 5.63%.

The global market for CBRN Defense has witnessed significant growth over the forecast period due to high competition, frequent changes in government policies, and rising investments in R&D projects are key factors that impact market growth. There are several domestic, regional, and global players operating in the CBRN Defense market who continuously strive to gain a significant share of the overall market. During the study, MRFR has analyzed some of the major players in the global CBRN Defense market who have contributed to the market growth. These include MSA Safety, Inc., Smiths Group Plc, Teledyne FLIR LLC, Chemring Group Plc, Leidos, Inc., Avon Protection, Blücher GmbH, Argon Electronics (UK) Ltd., Seyntex , Saab AB. FLIR Systems, Inc.

During the study, MRFR has analyzed some of the major players in the global CBRN Defense market who have contributed to the global market growth.

This study estimates revenue growth at global, regional, and country levels and offers an overview of the latest developments in each of the sub-sectors from 2018 to 2030. For this analysis, MRFR segmented the global Construction Software Market report based on system, aircraft type, and region.

What is the CAGR of the CBRN Defense Market in the upcoming period?

At 5.72% CAGR is expected to transform the market.

Which region is a major driver in the CBRN Defense market?

The North America regional market is projected to be the major driver of the market.

What segments are utilized for better understanding the CBRN Defense market?

The segments in the market are type, system, application and function

What reason will broaden the development of the CBRN defense market?

The greater than ever usage of nuclear energy is estimated to spur the market.

Who are the contenders in the CBRN Defense market?

CBRN Defense market in Europe is Expected to Witness Significant Growth at a CAGR of 5.63% During...