Drill Bits Market share is projected to exceed USD 4.64 Billion by 2027, with at a 7% CAGR during the forecast period.

Unlike roller cone bits, fixed cutter bits have no moving parts or bearings. The cutters are permanently mounted onto blades. They are integral to the structure of the bit. Polycrystalline diamond compact (PDC) bits dominate this category and hold most of the market share in the global drill bit market. The polycrystalline diamond compact (PDC) by General Electric was invented in 1971. The globally viable technology has impacted nearly all material removal industries. The drilling bits industry at Hughes Tool Co. (HTC) was introduced by GE Carboloy in late 1972, and the progression for PDC cutter and bit technology has been slow for several years. The PDC bits allow the penetration of formations with hard interbedded streaks. As PDC is considered the best suit for shale drilling, the ongoing rapid developments in the shale business have aided the growth of the PDC drill bit market in the past 20 years. They are being used in majority of North American land drilling applications.

The Drill Bits Market is witnessing a wide emergence of market trends like the increasing oil and gas exploration and development activities, unconventional field developments, and directional drilling.

Drill bits are made up materials such as tungsten carbide, diamond for increasing the steel bits strength. Based on specific drilling requirements, different drill bits are employed for desired results. It is possible that, for a single well construction, different drill bits would be used to overcome any challenges in well drilling. On the other hand, drill bits have to be changed on the basis of wear and tear as well. Usually drill bits are selected based on the type of formation encountered by the drilling operators, and based on the type of drilling activity as well. With increased oil and gas exploration activities in recent time, the market for drill bits is expected to witness a significant growth during the forecast period.

North America region is expected to be the largest market for drill bits, as the region is leading with more onshore wells. With regulation support, new drilling activities are carried out across the region. This is closely followed by the Asia Pacific region, where China is contributing majorly to the growth of drill bits market with increased onshore drilling activities. The drill bits market in Europe region is driven by the enhanced oil recovery projects in the North Sea region. 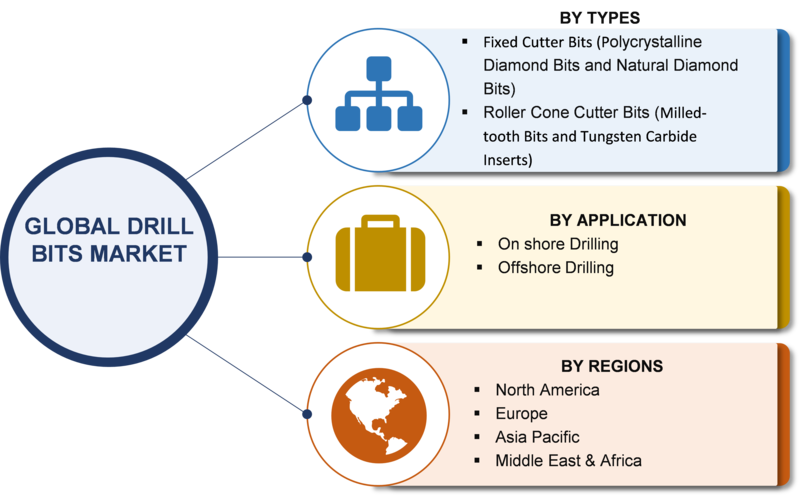 North America is expected to be the largest market for drill bits with increased horizontal drilling and unconventional drilling activities. U.S. has, in recent times, established itself as a major crude oil producing nation with increased onshore drilling activities for extraction of shale oil and gas. In addition to that, the Gulf of Mexico region is witnessing increased oil and gas enhanced recovery projects that can extend the operating life of the maturing oil wells. With increasing shale gas development projects in China, the Asia Pacific region is also expected to witness a rapid growth for the drill bits market. With increasing oil and gas discovery activities in countries such as Indonesia, Australia, and Philippines, the region is expected to witness a huge demand for drill bits.

At what growth rate is the drill bits market evolving?

The global drill bits market is maturing at a whopping 7% CAGR over the review period of 2022 to 2030.

Who are the major market giants operating in the global drill bits market?

Which component segment of the drill bits market is observing the fastest growth?

The fixed cutter drill bits segment is slated to drive market growth over the review period.

Which application segment of the drill bits market is expected to witness the highest demand?

The onshore segment is likely to witness the highest demand in the drill bits market.

Which is the leading region of the drill bits market?

The North American region is expected to witness the highest growth.