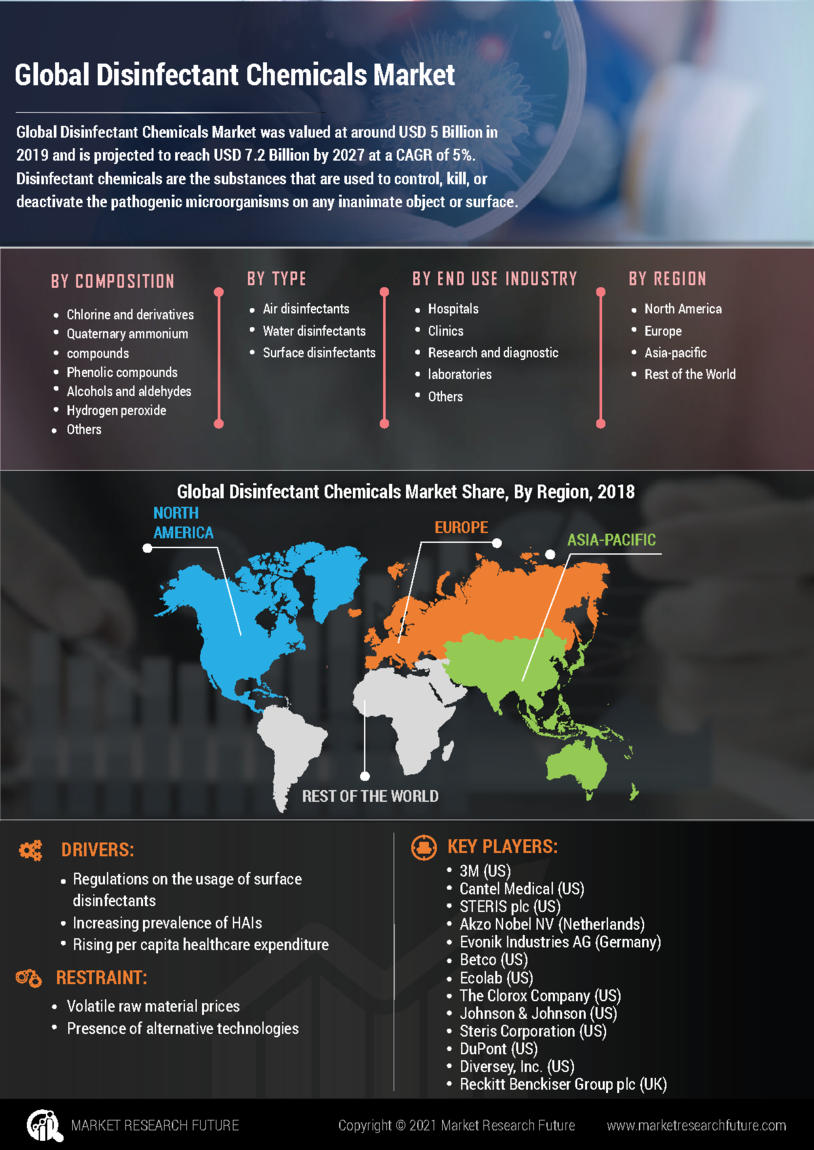 According to MRFR analysis, Disinfectant Chemicals Market was valued at around USD 5 Billion in 2019 and is projected to reach USD 7.2 Billion by 2027 at a CAGR of 5%.

Disinfectant chemicals are the substances that are used to control, kill, or deactivate the pathogenic microorganisms on any inanimate object or surface. Numerous disinfectants are available in the market that includes chlorine and derivatives, quaternary ammonium compounds, phenolic compounds, alcohols and aldehydes, and many more. They have been widely used worldwide to prevent and kill infectious diseases in the hospital and clinical premises.

The key factor driving the growth of the disinfectant chemicals market is the growing prevalence of healthcare-associated infections (HAIs), growing healthcare investments by government bodies across the globe, and rising geriatric population in developed economies. Favorable government legislations have forced hospital authorities to ensure sanitation in their facilities. However, factors such as the availability of alternative technology, such as UV radiation, is likely to hamper the growth of the disinfectant chemicals market.

All the above-mentioned factors are projected to boost the demand for disinfectant chemicals during the review period.

Disinfectant chemicals producers should comply with various global and regional regulations that include Affordable Care Act (ACA), Occupational Safety and Health Administration (OSHA), Center for Infectious Diseases (CDC), European REACH, US EPA, and US FDA. REACH is a European Union regulation which positions Europe as a leader in the control of chemical substance. Different countries have different disinfectant protocols, however, to remain competitive in the global economy, governments in various parts have aligned their national regulations with REACH.

What factors can act as market growth deterrents in the years to follow?

The availability of alternative technology, such as UV radiation can act as a market growth deterrent in the years to follow.

Which component-based segment can note the fastest growth rate?

Quaternary ammonium compounds segment can note the fastest growth rate in the market.

Which end-user holds the biggest share in the global market?

The hospitals segment holds the biggest share in the global market.

What factors drive the market growth in North America?

The North American market for disinfectant chemicals is driven by the presence of extensive healthcare infrastructure and an increase in the prevalence of HAIs in Canada.

Disinfectant Chemicals Market Is Expected To Showcase Rampant Growth Over 2027