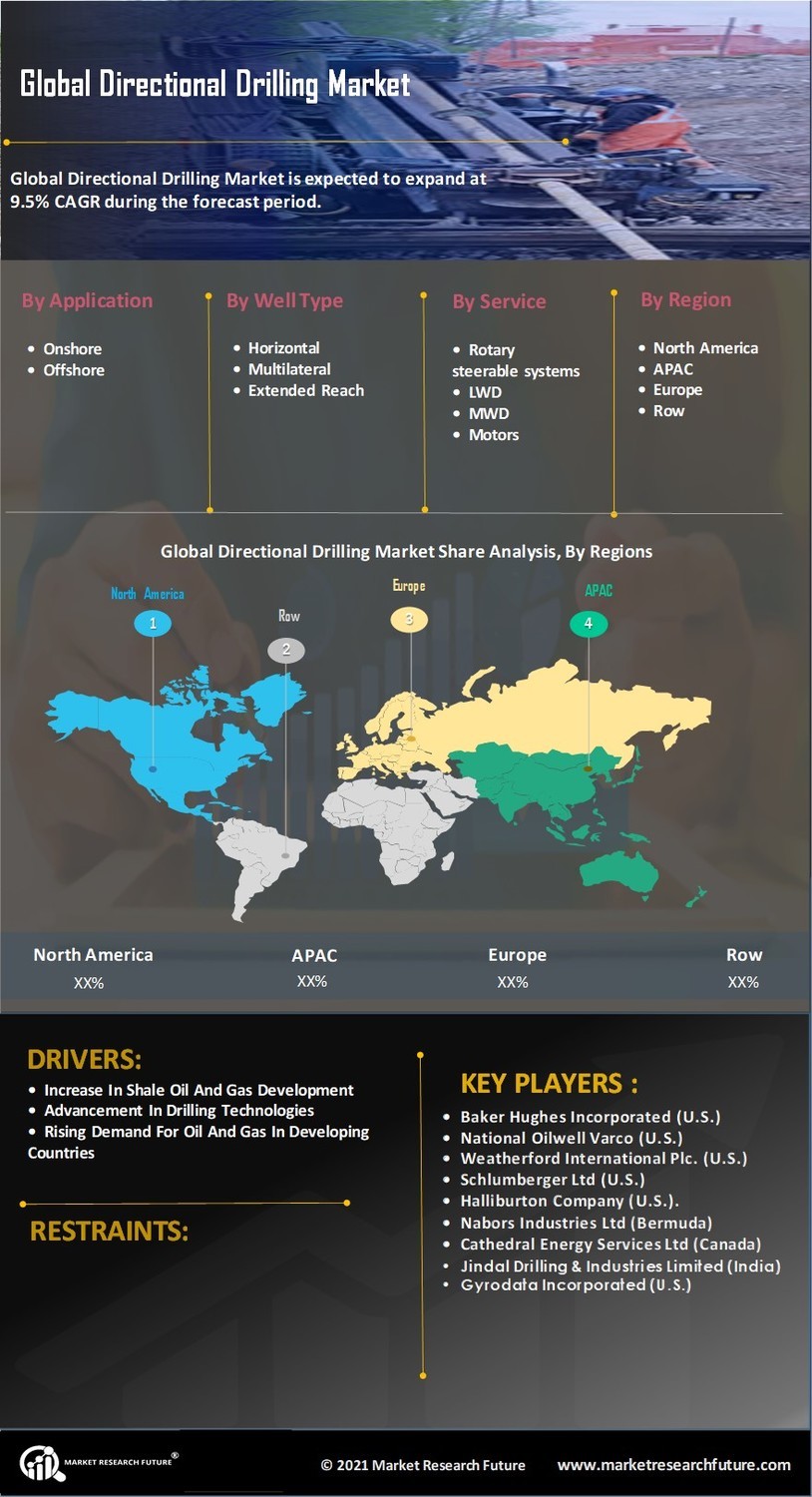 Directional Drilling Market Size was predicted at USD 6.7 billion in 2021. The directional drilling industry is predicted to grow from USD 7.3 billion in 2022 to USD 13.8 billion by 2030, exhibiting a compound annual growth rate (CAGR) of 9.5% during the forecast period (2022 - 2030). One of the major reasons influencing the directional drilling market's expansion is a sharp rise in onshore and offshore oil and gas exploration operations. Additionally, the growing use of the products for surveying, designing, and building underground cables for installing subsurface electrical and telecommunication systems is the key market driver enhancing market growth.

The directional drilling sector is being driven forward by the discovery of reserves and oilfields. The major discoveries include the Alpine high in West Texas, Alaska in the United States, the Golan Heights in Israel, the gas discoveries at Dinkov and Nyarmeyskoye in the Kara Sea off the Yamal Peninsula in West Siberia, the oil discoveries at Tilapia, Yellowtail, and Haimara in the Stabroek block, and the offshore gas discovery at Lang Lebah-1RDR2. According to projections, oil prices will rise in the upcoming years, encouraging independent exploration companies, gas producers, and oil field operators to invest in new oil and gas finds. Therefore, the trend of discovering oil fields has enhanced the global market CAGR in recent years.

As the world population is expected to rise from 6.7 billion in 2011 to 8.7 billion by 2035, there will be a significant increase in the need for energy. The energy demand will increase significantly due to population expansion and the rising standard of living for many people in developing nations. The developing world, China and India, is responsible for more than 70% of the world's rising energy demand. Production requirements must be met to maintain the well's optimum output and extract the most oil and gas resources possible, thus driving the directional drilling market growth.

The global need for energy has increased due to the growth of the oil and gas industry. However, due to rising urbanization, globalization, and major economic development, it is anticipated that the considerable demand for unconventional fuel, such as shale gas, tight gas, and coal bed methane, will drive the directional drilling market expansion. According to estimates from the U.S. Energy Information Administration (EIA), shale formations contributed around 27.2 trillion cubic feet (Tcf) of the country's total 2021 dry natural gas production, or 79%. The directional drilling market size is expected to be driven by growing interest in recovering undeveloped oil and gas. The expanding oil and gas industry is another factor driving the directional drilling market revenue.

The Directional Drilling Market segmentation, based on application, includes onshore and offshore. The offshore category is anticipated to experience the largest growth. Exploration and production activities are expected to be carried out globally in the near future due to the enormous unexplored oil and gas reservoirs. Additionally, the average breakeven price for all unapproved projects is falling, which lowers the cost of oil production in offshore locations. Hence, rising applications of the offshore sector positively impact market growth.

Based on well type, Directional Drilling Market segmentation has been divided into horizontal, multilateral, and extended reach. In 2021, the horizontal well type dominated the market. The expanding use of horizontal well type is strongly influenced by growing concerns about the need to reduce environmental harm brought on by the world's rapid infrastructure expansion. Additionally, the multilateral well witnessed the fastest growth rate in the Directional Drilling Market revenue. Multilateral wells cover a larger area of the reservoir than vertical wells and cover the reservoir more effectively. As a result, they have a higher production index and oil recovery, which means there is less need to drill further development wells in the reservoir.

November 2020: D-Tech introduced the Invictus rotary steerable tool (RST). This new release will enable directional firms to use the RST with their preferred measurement while drilling (MWD) sensors for real-time downhole communication, providing all users with a greater understanding of downhole conditions at the lowest possible cost. This creation has further broadened the growth opportunity for the directional drilling industry.

The market for directional drilling services by service type is anticipated to develop at the highest rate during the projected period in the Measurement-While-Drilling (MWD) segment. The capacity to continually monitor the wellbore and the real-time directional survey of downhole conditions can be credited with the market growth in this niche.

By Region, the study provides market insights into Europe, North America, Asia-Pacific and the Rest of the World. North America's directional drilling market accounted for USD 2.8 billion in 2021 and is expected to exhibit a significant CAGR of 42.9 percent growth during the study period. A greater market share is predicted for North America due to the region's considerable oil and gas sector finds and vast potential for oilfield exploration. By 2020, gas output is anticipated to average 47 billion cubic feet per day due to recovering drilling activity. Alberta, the nation's top producer of gas and crude oil in Canada, is predicted to have the greatest rise in activity. Consequently, the Canadian directional drilling market is predicted to expand gradually.

The industry will expand as major market players make significant R&D efforts to diversify their product ranges. Market participants participate in many strategic measures to strengthen their global positions, in addition to important market developments such as new product releases, contractual agreements, mergers and acquisitions, increased investments, and collaboration with other organizations. If competitors in the directional drilling industry want to progress and succeed in a more competitive market, they must charge reasonable prices for their products.

Local manufacturing to lower operational costs is one of the key business methods employed by the directional drilling industry to satisfy clients and increase the market sector. The directional drilling industry has made some of the most significant medical discoveries in recent years. Directional Drilling market major players, such as Nabors Industries Ltd (Bermuda), Gyrodata Incorporated (U.S.), Cathedral Energy Services Ltd (Canada), and National Oilwell Varco (U.S.), are investing in R&D projects to enhance demand.

Key Companies in the directional drilling market include

January 2023: IMDEX, a global mining-tech business, has entered into a formal agreement to buy Norway-based Devico AS for A$334 million ($230 million), which it claims will strengthen its industry-leading position in mining technology and improve market penetration. Devico AS, a developer of innovative sensors and directional drilling technologies, is likely to be acquired by late February.

How much is the directional drilling market?

The size of the global market for directional drilling size was estimated at USD 6.7 billion in 2021.

What is the growth rate of the directional drilling market?

Which region accounted for the biggest market share for the directional drilling market?

The largest portion of the global market was in North America.

The offshore category dominated the market in 2021.

Which service had the largest market share in the directional drilling market?

The MWD sector had the largest share of the global market.