Geothermal power market size is projected to grow at a 5.26% CAGR between 2022 and 2030 and to reach USD 5.89 Billion valuation. Growing demand for electricity generation from renewable energy sources is expected to drive global market demand.

The water or steam below the earth never directly contacts the turbines while functioning in binary cycle power plants. Instead, water from geothermal reservoirs is pumped with the help of a heat exchanger. It heats the second liquid-like isobutene which boils at a lower temperature compared to water. The second liquid is heated into steam, which powers the turbines for driving a generator.

Geothermal power is generated primarily in regions like California and Nevada. For example, in 2020, 11,345 gigawatt-hours (GWh) of electricity was generated from a geothermal power functioning in California. On the other hand, Nevada had registered 235 MWe gross (196 MWe net) installed capacity in 2020. The remaining geothermal energy comes from power plants located in regions like Alaska, Hawaii, Idaho, New Mexico, Oregon, and Utah.

Moreover, new projects are also planned in the region, which is expected to cater to the rising need of the market functions. For example, Canada's Minister of Natural Resources announced USD 40.5 million investment for the Clarke Lake Geothermal Development Project. The project will likely develop one of Canada's first commercially viable geothermal electricity production facilities.

The US has 93 binary-cycle generators averaging 8 MW of capacity and 79 steam generators averaging 23 MW each. Dry-steam and flash plants require rare and high-temperature requirements, followed by shallow reservoirs, higher power output, and more economically efficient than binary plants. Announcements for many new installations have been announced in recent years, which may support the market's growth during the forecast period. Turboden SpA, a group company of Mitsubishi Heavy Industries Ltd (MHI) and Mitsubishi Power Ltd, jointly announced and confirmed an order receivable for 29-megawatt (MW) binary cycle power generation equipment to be installed at the geothermal power plant operated in Palayan, in the Philippines, by Energy Development Corporation (EDC).

Many major players such as Enel Spa, Ansaldo Energia, and Reykjavik Geothermal are actively focusing on signing contracts and agreements with utilities and industries to provide geothermal power. For instance, in December 2019, Sumitomo Corporation signed a contract with the Indonesian government to develop geothermal projects, which will generate approximately 400 MW of electricity. Such developments in the market are expected to drive the growth of the global geothermal power industry during the forecast period.

Global geothermal power market has been segmented based on power plant Type, Power Output, and End-Use. Based on power plant type, the global Geothermal Power Market is divided into flash steam plants, dry steam plants, and binary cycle power plants. The binary cycle power plants segment is expected to hold the largest share of the market and grow at the fastest rate during the forecast period. However, flash steam plants also hold a substantial share of the market. Based on power output, the global market is bifurcated into up to 5 MW and above 5 MW. The above 5 MW segment held the larger market share in 2018 and is expected to grow with the highest CAGR during the forecast period as the power plants in this segment are mostly used to support grids. Based on end use, the global market of geothermal power has been segmented into residential, industrial, and commercial. The industrial segment is expected to hold the largest share within the global market due to the increasing industrialization, globally. 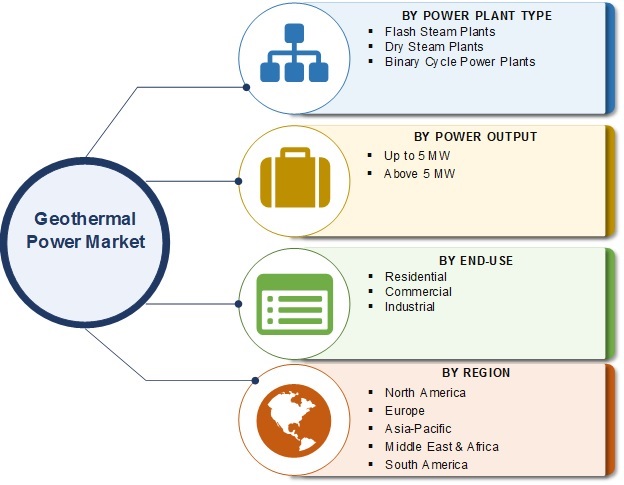 Geothermal power is electricity generated from geothermal energy where steam from hot water located under the ground is used to rotate the turbine, which is connected to a generator for electricity production. Geothermal energy is obtained from fluids contained in the Earth’s sub-surface and is available abundantly around volcanic regions. The energy market trends will also witness a growing trend for geothermal power in the coming years.

Based on the region, the global geothermal power market is segmented into asia-pacific, north america, europe, the middle east & africa and south america. North America holds the largest share of the Geothermal Power Market due to the high availability of geothermal resources in the region. However, the geothermal power industry in asia-pacific is expected to grow at the fastest rate during the forecast period, primarily to the numerous government initiatives introduced in the region to increase the adoption of renewable energy sources.

What is the expected growth rate of the market?

The expected growth rate of the market can be 5.26%.

What are the main restraining factors in the global market?

The high investments needed in geothermal projects can be a restraining factor in the market for geothermal power.

Wat are the power plant types considered in the report?

Which region is currently the market leader?

How does geothermal power work?

At a geothermal power plant, wells are drilled 1 or 2 miles deep into the Earth to pump steam or hot water to the surface. ... When the water reaches the surface, the pressure is dropped, which causes the water to turn into steam. The steam spins a turbine, which is connected to a generator that produces electricity.

What are the 3 main uses of geothermal energy?