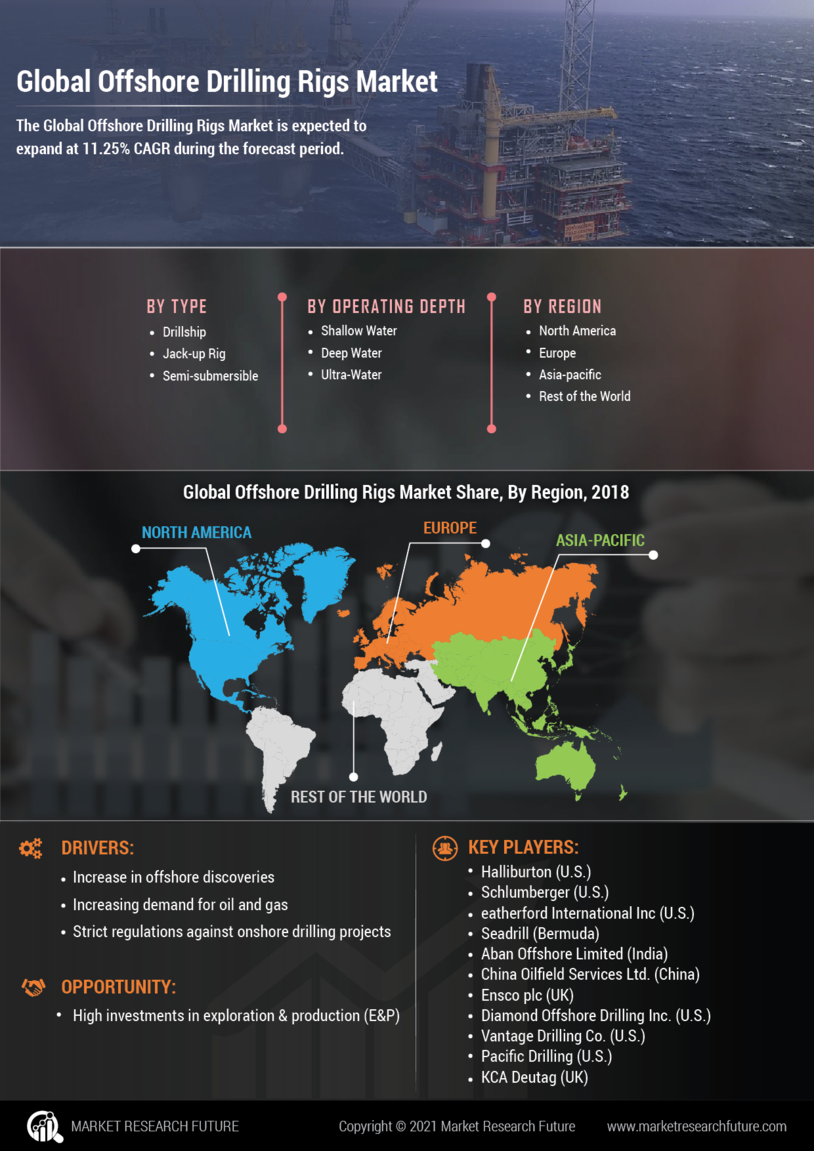 Offshore drilling rigs market is expected to expand at USD 147.7 Billion and  6.63% CAGR during the forecast period.

Offshore drilling rigs industry is expected to have a huge number of advancements over the forecast period owing to continuous developments in end-use industry coupled with growing demand for exploration and production expenditure in oil industry. The market is also expected to have high expansion activities by multinationals and well-established companies.

The offshore drilling rigs market is segments on the basis of type, operating depth, and region. On the basis of type the market is classified as drillship, jackup rigs, and semi-submersible rigs. Amongst these, semisubmersible segments holds the largest market share due to its capability of withstanding the harshest conditions and ultra-deepwater at the depth of more than 3000 km based on operating depth, the offshore drilling rigs market is segmented into three segments, which are shallow water, deep water, and ultra-deepwater. Ultra-deepwater segment is dominating the market position due to increasing discoveries from ultra-deepwater. 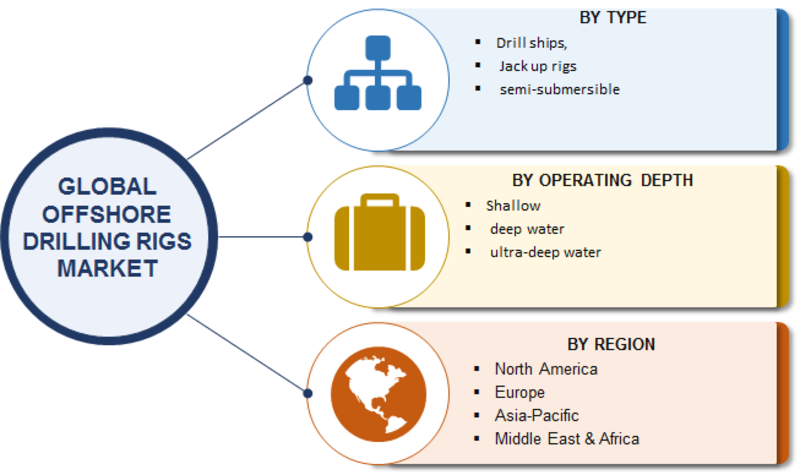 Latin American is the leading region due to high offshore potential reserves of oil and gas. Moreover, factors such as high investments in exploration & production (E&P) lead to an increase in demand for drilling equipment and offshore rigs. The increase in production of oil & gas in North America and the Middle East has driven operators to focus on offshore markets. Secondly, liberalization of the Mexican oil & gas sector drives the demand for offshore drilling.

Demand for energy fuels is rising per year owing to increasing industrialization, concerns related to energy security, globalization, and increasing economic wealth of developing countries. Offshore drilling rigs are seeking advantage from alarming oil and gas reservoir depletion, new offshore discoveries, and strict regulations to drill in the populated areas on land. Drilling rigs are the most fundamental requirement of starting production from new oil wells. Offshore regions hold large oil and gas reserves at even deep water and ultra-deep water locations. Oil companies are shifting to offshore drilling as the amount of oil produced per day from offshore is significantly higher than from onshore. Besides the lifespan of offshore oilfields are longer than that of onshore fields. For instance, Santos Basin in Latin America accounts for around 35% of Brazil’s total oil.

What is the factor rising the market’s valuation?

The demand for energy fuels is rising per year because of rising industrialization, concerns related to energy security, globalization, and growing economic wealth of developing countries.

The segments of the market are included as type and operating depth.

Which region is leading the growth in offshore drilling rigs market?

Asia Pacific is the leading region for growth in offshore drilling rigs market.

Which market players are leading with the high market share?