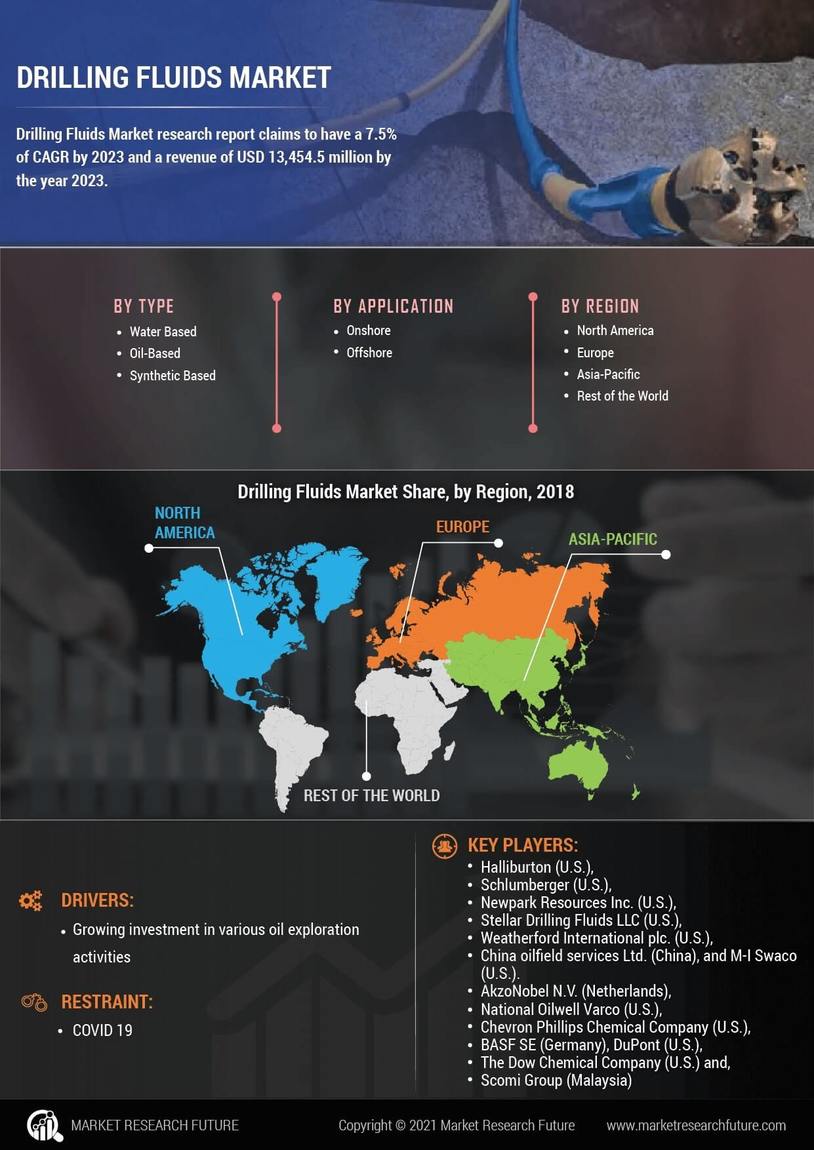 There has been a constantly increasing demand for modern renewal and generation of clean energy, which expands the major demand for Drilling Fluids; there are plenty of advantages over traditional ones, and rising demand, also because lack of proper infrastructure are few of the primary drivers for the market Trends. The large part of Europe is estimated to be the quickest growing area.

Regional AnalysisThere is no doubt; North America is leading the Drilling Fluids Market due to the presence of the grand global players in this particular region as well as increased technological advancement.


Drilling Fluids Market primarily consists of the fundamental or major requirements for developing or starting the definite field development process after the fortunate exploration of the main oil field. Huge quantities of oil are required as industrial fuel for many different industries, including transportation industry, automobiles, lubricants industry, chemicals industry, and others. To meet the required demand for fuel, many discoveries are immensely carried out. Likewise, in this current scenario of recovering huge crude oil costs after the global financial crises of 2014, plenty of oil exploration and production businesses appear to be extremely profitable. The first phase of advanced field development process of an oil field is consistently the building of oil wells, which needs to drill fluids for proper control and pressure conservation at the surface levels and administer ease of drilling processes. On the other hand, various completion fluids are proper liquid that contains salts for higher density and basically avoids formation damages particularly. Likewise, the proper completion fluids also make excellent packer fluids that are majorly capable of lots of operations expedition. Drilling Fluids Market are primarily designed to contest specific, definite reservoir criteria that take into account various critical factors such as major equivalent high static density (ESD), proper contamination risks, and various crystallization temperatures.


There has been a growing investment in various oil exploration activities that drives the expansion of the market. For example, a biggest oil giant BP has recently disclosed its recent plan to endure spending in latest exploration activities in its major projects in Gulf of Mexico various production platforms. Also, increased capital costs for various drilling may restrict the expansion of the market. Newly, offshore oil and gas expedition activities in the major area of Gulf of Mexico region and other various regions all over the world which are more and more towards various other Deepwater ocean regions. The various Deepwater oil field development that usually happens in the form of extremely high-risk, and past long-duration drilling projects, which make them highly costly.There are four major regions across the globe that are majorly involved in the global Market Share – North America, Europe, Asia Pacific region, and Rest-of-the-World (RoW), depending upon the country-level market sizing.  The drilling fluids Market Trends are very comprehensive; you have to understand each and every player in the market. There is no debate that in spite of the occurrences of COVID 19, the latest trends and future opportunities of the drilling fluids Market Growth will see tremendous spreading opportunities.


The increasing dependence on the Global Market Analysis supports several industries around the globe that have doubled. The market value has come up as quite compelling easy solutions. There are lots of emerging markets related to drilling fluids market outlook all across the world like India, China, and Brazil that are projected to grow fast over the estimated years.


The outbreak of COVID-19 has hard severely knocked out the growing pace of the Market because of mandatory closures of consumer markets and factories across the globe, the profit share of the companies has been shrinking. COVID19 has disrupted the entire supply chain. Prolonged lockdown had a negative influence and affected the morale of the big companies.


The Drilling Fluids Market is projected to touch the CAGR of 7.5% during the assessment period of 2022-2030, because of the impressive demand. Lots of factors are boosting the concept. The companies are planning and executing current business operations through innovative techniques. Many factors affect the growth of the Market, such as market size, trends in global technology, capital investment, etc.


In case of the Global Market, the report claims to have a 7.5% of CAGR by 2030 and a revenue of USD 13,454.5 million by the year 2023. The demand and craze for it is rising, which has increased Drilling Fluids Market growth. It is also estimated to increase at the most elevated speed over the given figure time frame, which is spreading or expanding across different industry verticals. Additionally, government support and customer interest are helping the market to expand. The development is primarily credited to little and medium undertakings or companies where fewer effort arrangements are significantly required.

Technology AnalysisThe drilling fuel industry is primarily proposed to have a big amount of new-age advancements methods and revenues over the estimated period because of continuous developments in high net worth end-use industry, which is coupled with expanding demand for worldwide crude oil. The drilling fuel market is also projected to have increase expansion activities by various multinationals and well-established organizations.

By Division by StructureThe worldwide Drilling Fluids Market is projected to witness great substantial growth during the estimated time period because of factors, for example, increasing demand for industrialization, huge investment in oil infrastructure, development in various and large scale industries along with the huge rapid expansion is also acting as another primary growth-inducing factor.

COVID 19 Impacts and effectsThe COVID 19 has affected 215 countries and the drilling fluids market as well. To combat the negative effects, countries lead lockdowns that have adversely affected the drilling fluids Market. The pandemic leads to several challenges to the sector; it is affected all over the world. Plenty of factors like the risk of uninterrupted production, supply chain, distribution, lack of workforce employees, and much-decreased development activities have primarily affected the ongoing demand and supply. People are not as active as earlier. Major strategic developments are taking place. MNC are investing more in the drilling fluids Market Size of the increasing demand from consumers across the globe.

Division by RegionThe regional analysis of several Drilling Fluids Market is being divided and studied such as Asia Pacific, North America, European nations, and rest of the world countries. As per Geographical, North America is projected to be the biggest market in terms of profit contribution due to increased adoption of several cloud-based services by way of production systems and by several distribution channels. In addition to this, the countries of Asia Pacific are projected to grow rapidly in Drilling Fluids Market due to increasing investment. Also, there has been a rise in demand in major developing countries. For example, India and China are projected to lead growth in several Drilling Fluids Market in different Asia-Pacific regions.

At what CAGR is the global drilling fluids market predicted to grow during the forecast period?

Who are the top key players operating in the market?

Which region will lead the global drilling fluids market?

What are the key factors driving the global drilling fluids market growth?

What will be the valuation of the global drilling fluids market during the forecast period?

The global drilling fluids market is predicted to reach USD 13,454 million by 2023.