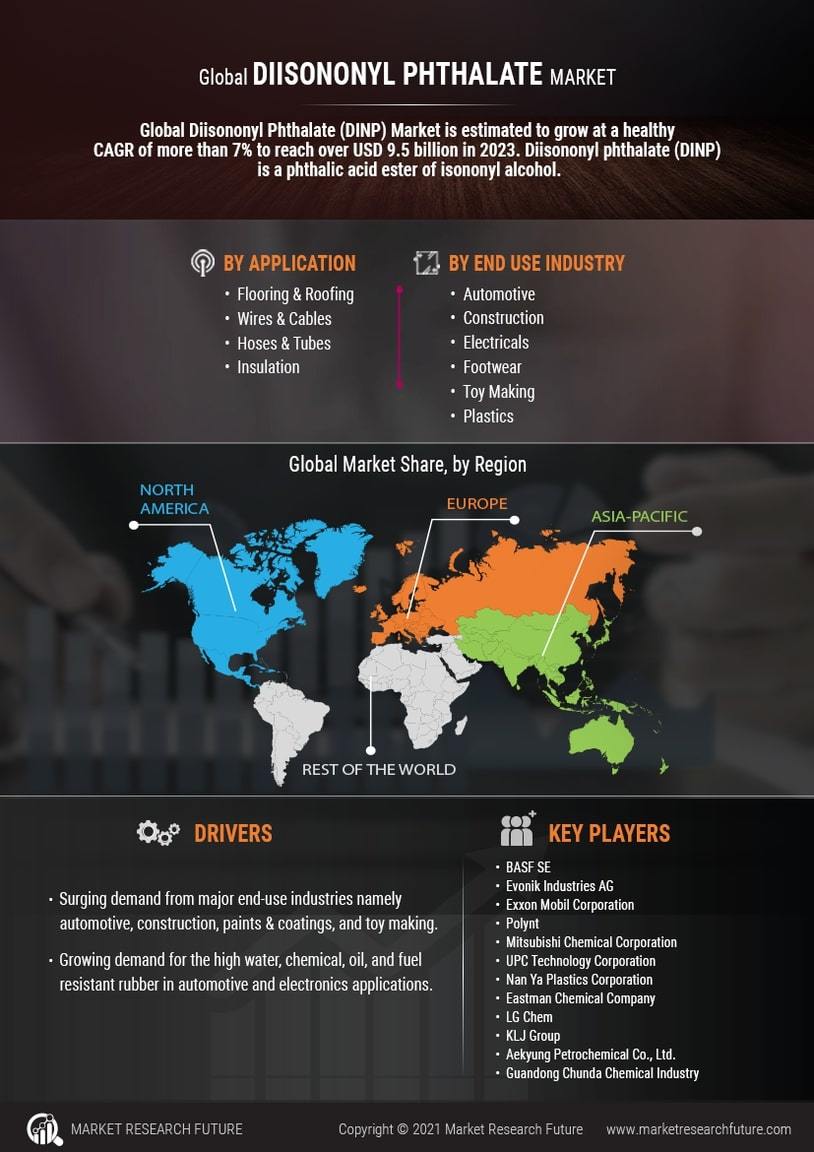 According to the MRFR analysis the Global Diisononyl Phthalate (DINP) Market is estimated to grow at a healthy CAGR of more than 7% to reach over USD 9.5 billion in 2023. Diisononyl phthalate (DINP) is a phthalic acid ester of isononyl alcohol and it is phthalate-based plasticizer which is primarily used as an additive in PVC plastics, co-polymers and resins. The plasticizers significantly increase the operation ability and flexibility of the various polymeric materials. In market, the phthalate plasticizers occur in a colorless and odorless solid form. The phthalate-based plasticizers are highly durable, economical and exhibit excellent resistance against weathering and temperature resistant. DINP is a high molecular weight phthalate-plasticizer. DINP is mainly used to increase the flexibility of the various PVC products. Some of the substantial applications of DINP are flooring & flooring, wires & cables, hoses & tubes, automobile coatings, coated fabrics, safety gloves, artificial leather, footwear, and toy making. Additionally, DINP is widely used in non-PVC applications such as rubbers, pigments, paints, printing inks, sealants, and adhesives.

The major factors favoring this growth of the market are surging demand from major end-use industries namely automotive, construction, paints & coatings, and toy making. The product is widely used in almost all the rapidly growing industries such as footwear making, plastics, and electricals. This is expected to fuel its demand during the forecast period. In past few years the global market for DINP is growing at a robust CAGR on account of its use its use in manufacturing the food grade packaging materials. In addition, growing demand for the high water, chemical, oil, and fuel resistant rubber in automotive and electronics applications is likely be the key driver for Diisononyl Phthalate market during the review period. However, the volatility in the prices of raw materials of Diisononyl Phthalates and rapid research in the field of development of ecofriendly and innovative products by leading players may hamper the market growth in coming years. 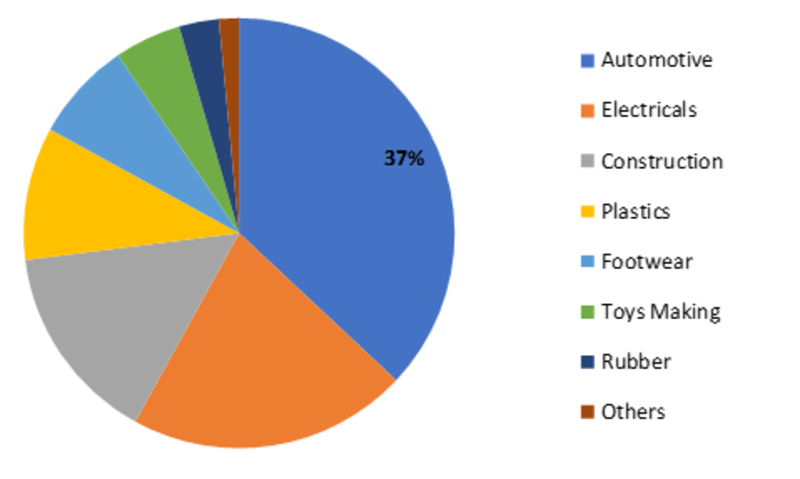 Asia-Pacific, North America, Europe, Latin America, and the Middle East & Africa are the five regions studied for the global Diisononyl Phthalate market. Asia-Pacific dominated the global diisononyl phthalate market in 2017 and is also projected to grow at the highest CAGR during the forecast period. The market in this region is witnessing robust growth during review period owing surging demand for the product form the major end-use industries such automotive, construction and electricals. Additionally, the governments of the emerging economies in this region are incentivizing their footwear making industry, which is anticipated to boost demand for the product in this region during the forecast period. Additionally, rapid growth of toys making industry in this region is expected to drive the market growth for diisononyl phthalate in this region.

North America is closely following Asia-Pacific and held the second largest market share in 2017. Rapidly growing reconstruction activities and growing demand for the product in the vast automotive industry are likely to drive the growth of regional diisononyl phthalate market.

Europe is another substantial regional market, wherein the demand for the product from in automobile industry is increasing at the healthy CAGR. The Middle East & African and Latin American markets held little market shares in 2017, yet high investment potential and availability raw material are significantly driving growth of the market.

The global diisononyl phthalate market has been segmented on the basis of technology, end-use, and region.

Based on technology, the global diisononyl phthalate market has been segregated into flooring & roofing, wires & cables, hoses & tubes, insulation, adhesives & sealants, and others.

On the basis of application, the market is categorized into automotive, electricals, construction, plastics, footwear, toys making, rubber, and others.

The global diisononyl phthalate market has been studied with respect to five regions—Asia-Pacific, North America, Europe, Latin America, and the Middle East & Africa.

The diisononyl phthalate market is projected to grow at a 7% CAGR between 2016-2023.

What will be the value of the diisononyl phthalate market during the forecast period?

The diisononyl phthalate market is predicted to touch USD 9.5 billion by 2023.

Which region will dominate the diisononyl phthalate market?

What are the key factors driving the diisononyl phthalate market?

Which factors may limit the diisononyl phthalate market growth?