Global Dicalcium Phosphate Market is projected to grow at a CAGR of 5.60% during the forecast period.

Dicalcium phosphate also known as dibasic calcium phosphate, is a water insoluble, white odorless powder. It consists of circa 28% calcium content, thereby acts as a nutritional supplement for calcium in various end-use industries such as food & beverage, animal feed, pharmaceutical, health & care and agriculture. Dicalcium phosphate also finds applications in agricultural sector to manufacture extensive range of phosphate fertilizers and is also used as vital ingredient in in pet foods. In addition, it is also used as a tartar control agent in oral care products such as toothpastes.

The agricultural segment is projected to expand rapidly in the coming years. The increased use of dicalcium phosphate in the production of fertilizers and animal feed is expected to drive the market during forecast period. Growing geriatric population and rising consumption of dietary products are further driving the demand for dicalcium phosphate globally. Additionally, rising prevalence of calcium related diseases such as osteoporosis, rickets, hypoparathyroidism and others coupled with the deficiency of essential nutrients in human body is aiding the growth of dicalcium phosphate as a calcium supplement. Furthermore, the rapid expansion of agricultural, food & beverage and pharmaceutical industry, is likely to fuel the demand for dicalcium phosphate during the forecast period.

The advancements in pharmaceutical industries and continuous development in phosphate fertilizers coupled with limited abundance of phosphorous in the nature are creating lucrative opportunities for the key players operating in dicalcium phosphate market. 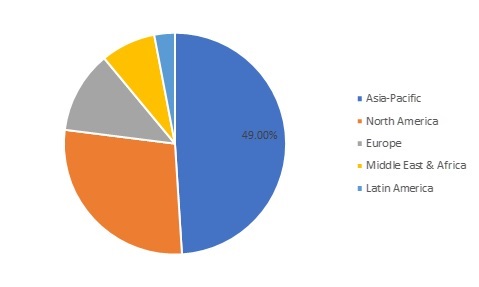 The Asia-Pacific region is accounted for the largest market share in 2019. The region is expected to showcase a significant CAGR in the foreseen period owing to presence of vast arable land. Asia- Pacific being the largest consumer of fertilizer, constitutes 58.5% of world’s total fertilizer consumption. For instance, the phosphate-based fertilizer demand in the region has increased from 21,590 thousand tonnes in 2014 to 23,920 tonnes in 2019, thus drives the regional demand for dicalcium phosphate in the production of fertilizers during the foreseen span. Additionally, expanding diary industries and increased dependency on calcium-based supplements is further creating a positive influence on demand for dicalcium phosphate market.  Furthermore, due to macroeconomic trends such as increase in disposable income and growing industrialization, the dicalcium phosphate market in the region is expected to lead in the coming years.

The North American region is projected to register a significant CAGR during the forecast period. Owing to the rising demand for dicalcium phosphate in well-established end-use industries such as agriculture, food & beverages and pharmaceutical in the region. The United States and Canada are major users of fertilizer in the region. Furthermore, the increasing demand for dietary supplements such as cereals, noodles and others along with growing health consciousness is anticipated to drive dicalcium phosphate demand in the region.

The European region is expected to showcase a healthy growth during the forecast period owing to the use of dicalcium phosphate in animal feed additives in the region. Additionally, the growing demand of the product as a pharmaceutical grade ingredient coupled with increasing awareness related to health can be attributed to the demand for the dicalcium phosphate in the region.

The global dicalcium phosphate market has been segmented by production method, end-use industry, and region.

Based on production method, dicalcium phosphate market has been bifurcated into phosphoric acid and hydrochloric acid.

Based on end-use, the market is classified into food & beverage, animal feed, pharmaceutical, agriculture and others.

By region, the market has been categorized into North America, Europe, Asia-Pacific, Latin America, and the Middle East & Africa.

What are the growth prospects of the dicalcium phosphate market?

The global dicalcium phosphate market is expected to grow at a strong 5.6% CAGR over the forecast period from 2019 to 2025.

The growing demand for calcium nutritional supplements and phosphate fertilizers is likely to be the major driver for the dicalcium phosphate market.

How is dicalcium phosphate produced?

What is the leading regional market for dicalcium phosphate?

Asia Pacific dominates the global market due to the growing pharmaceutical and agriculture industries in the region.

What are the leading players in the dicalcium phosphate market?