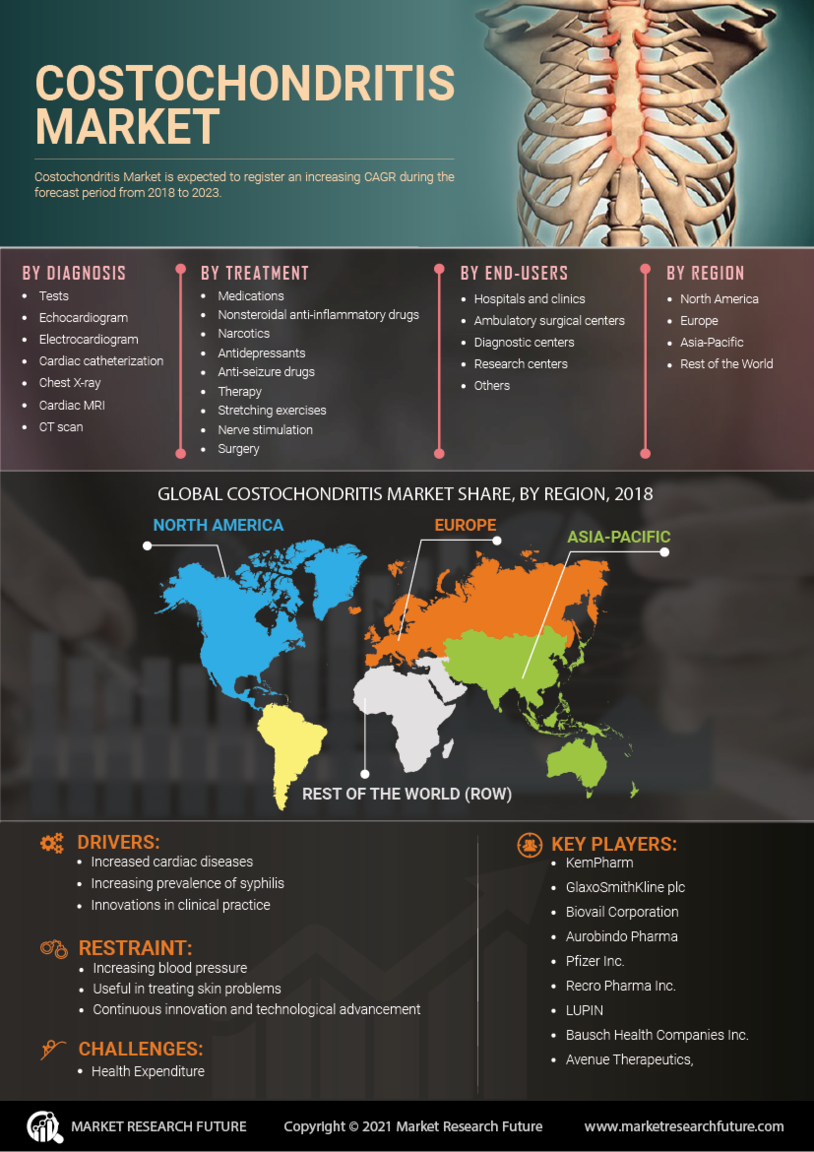 A number of reasons may contribute to costochondritis, including chest injuries and physical exertion, arthritis, osteoarthritis, ankylosing spondylitis, and tumours (cancerous or noncancerous). Aside from viral, bacterial, and skin conditions, costochondritis may well be affected by a multitude of factors. Approximately 22.7 per cent of persons in the United States had some type of rheumatoid arthritis between 2013 and 2015, according to the Centers for Disease Control and Prevention in August the year 2018. Because of the increasing number of arthritis patients, the costochondritis industry is expected to grow in the near future.

COVID-19 is indeed a new viral disease that has just been discovered and is responsible for an infectious illness. In response to the World Health Organization's (WHO) classification of the viral outbreak as a plague, a number of big pharmaceutical firms, as well as small entrepreneurs, have come up to develop medicines and vaccinations to battle the rare coronavirus disease.

Rheumatoid Arthritis is among the most common variables that contribute to the development of costochondritis (RA). According to research, 41 out of every 100,000 people diagnosed have RA every year, with females being 2-3 considerably more probable than males to have the disease. Due to the rise in RA cases, the number of individuals confirmed with costochondritis has grown, which is a primary driver for expanding the worldwide costochondritis market growth in recent years.

It is expected that the costochondritis market would benefit from the increasing number of people living with arthritis during the forecast timeframe.

Although factors like the heavy price of surgeries performed, the expense of therapies and the side effects associated with treatments are likely to restrain market development during the projection period, there is still room for expansion.

Despite the high prices of operations and therapies, the harmful side effects of these therapies are preventing this industry from expanding internationally.

North America is the most critical contributor to the development of the worldwide market for costochondritis. According to estimates, over 24 per cent of individuals in the United States have been identified with rheumatoid, as well as the rate of instances of TB is also on the increase. These are the most critical drivers driving the development of the costochondritis industry in North America, and particularly in the United States of America. Europe is seeing a surge in the number of people suffering from hypertensive diseases, which is fueling the expansion of the global costochondritis market in the region.

According to the reports, the worldwide costochondritis market is categorized on the basis of diagnostic, therapy, end-user, and regions. The costochondritis market may be divided into many categories based on the diagnosis. It is subdivided into the following tests: cardiac magnetic resonance imaging (MRI), cardiac catheterization, chest X-ray, echocardiography, EKG, stress tests, and CT scan. The market is divided into three categories based on the kind of treatment: therapy, drugs, and surgery.

Antidepressants, Nonsteroidal anti-inflammatory medicines (NSAIDs), opioids, and anti-seizure medications are all included in the pharmaceutical therapy category. Workouts and neural stimulation are two types of therapy that are offered. The market is categorized based on the end-user, with research centres, hospitals and clinics, diagnostic centres, ambulatory surgery centres, and others being the most common categories.

The market is segmented based on the diagnostic, therapy, end-user, and regions. The global costochondritis markets trends are expected to witness decent growth during the forecast period.

The market is segmented into research centres, hospitals and clinics, diagnostic centres, ambulatory surgery centres, and others based on the propulsion types.

According to the reports, the global costochondritis global market is divided into the Americas, Europe, Asia Pacific, and the middle east and Africa. It is predicted that North America is leading the worldwide market for costochondritis because of a rise in cardiac illness, syphilis, cardiac studies, and medication availability in this area. To put it another way, from 2015 to 2016, the overall number of syphilis reported incidents to the CDC climbed by 17.8 per cent. Business growth is supported by a surge in syphilis occurrences in this area.

Hypertension and heart disease incidences in Europe have pushed the costochondritis market share to 2nd place in Europe. In January of this year, Public Health England reported that: Having hypertension is the third most common risk factor for illness in the United Kingdom. The disease afflicted one in four individuals and almost 12.5 million persons in England in the year 2015. During the projection period, this figure is anticipated to rise. A significant prevalence of hypertension supports costochondritis in this area.

In 2017, the worldwide costochondritis global market was predicted to develop at the quickest rate in Asia-Pacific. The growing number of heart attacks and automobile accidents, as well as people's shifting dietary habits, are all contributing to the market's predicted expansion. The Middle East and Africa have a minor proportion of the worldwide costochondritis market value because of poor health spending, lack of knowledge of novel technologies, and economic diversity. As a result of increased cardiac care programmes and increased expenditures in Middle Eastern research, the industry is predicted to rise.

The competitive landscape part of the Costochondritis market outlook provides an in-depth look at the characteristics of the essential competitors competing in the worldwide market environment for the disease. A fascinating look at the essential advances, differentiating tactics, and other critical characteristics of the firms with a grip in the Costochondritis industry are provided in this book.

What would be major factors triggering costochondritis market growth?

What would bog down the costochondritis market?

What are the treatments included in the costochondritis market?

The treatments included in costochondritis market are therapy, medications, and surgery.

What are the various tests included in the costochondritis market report?

Which region would dominate the costochondritis market growth?

Increasing Prevalence of various cardiovascular diseases is expected to drive the global costocho...