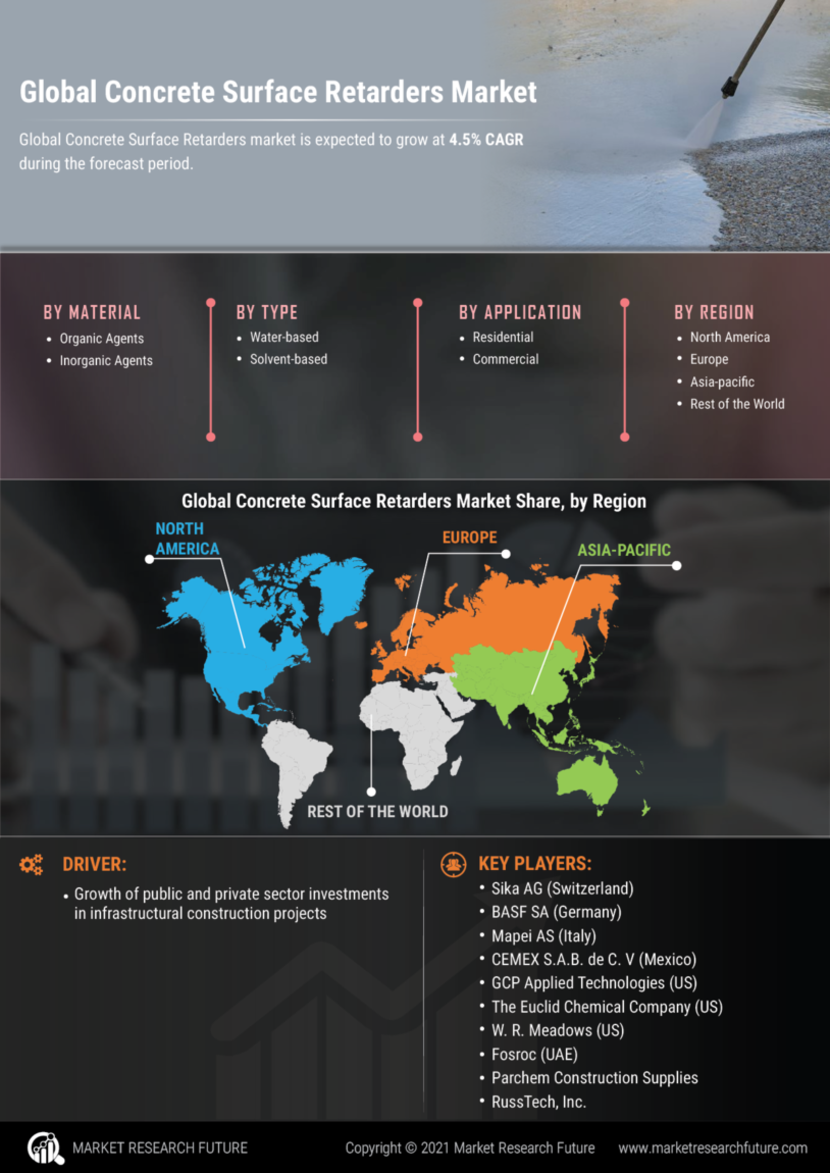 The global concrete surface retarders market is expected to witness a CAGR of around 4.5%, to reach at USD 90 million over the forecast period.

With the rapid expansion of residential as well as commercial construction sector, the concrete surface retarders market is anticipated to gain momentum in the coming years. Construction sector has experienced unprecedented growth from the past few years, which is attributed to the technological advancements in emerging economies such as China and India. Factors such as rapid urbanization coupled with demand for green buildings, contributes to the tremendous growth of the global concrete surface retarders market.

Based on material, the market has been bifurcated into organic and inorganic agents. Organic agents accounted for the largest market share of around 60% in the overall concrete surface retarders market, which is also expected to exhibit sustainable growth rate over the forecast period. This is attributed to the broad application used in vertical and horizontal concrete surface retarders across the construction industry.

Based on type, the segment is further classified into water-based and solvent-based. Water-based segment accounted for the largest market share in 2017, which will continue with its position by the end of 2023. Water-based concrete surface retarders are gaining momentum across the globe, owing to the widespread use of water-based concrete surface retarders and their product advantages such as no presence of volatile organic compounds (VOCs) and biodegradability has garnered industry-wide attention.

Based on application, the segment is classified into residential and commercial. Commercial segment holds the largest market share in 2017, which will continue with its position by 2025. The segment is also anticipated to witness maximum growth rate in the market due to the high demand for concrete surface retarders mostly from the commercial construction activities. Rapid expansion of multi-national companies leads to the need for more office spaces which in turn results in increase in commercial construction activities, globally. Hence, commercial segment is projected to contribute significantly over the forecast period.

What would be the valuation of concreter surface retarders market by 2023?

The valuation of concreter surface retarders market would be USD 90 million.

What would be the CAGR for the concreter surface retarders market during the forecast period of 2018-2023?

Concreter surface retarders market CAGR would be 4.5% during the forecast period.

Which region would dominate the concreter surface retarders market?

What would be the major reason behind the APAC concreter surface retarders market growth?

Concrete Surface Retarders Market To Along With Increase In Construction Activities, The Growth I...