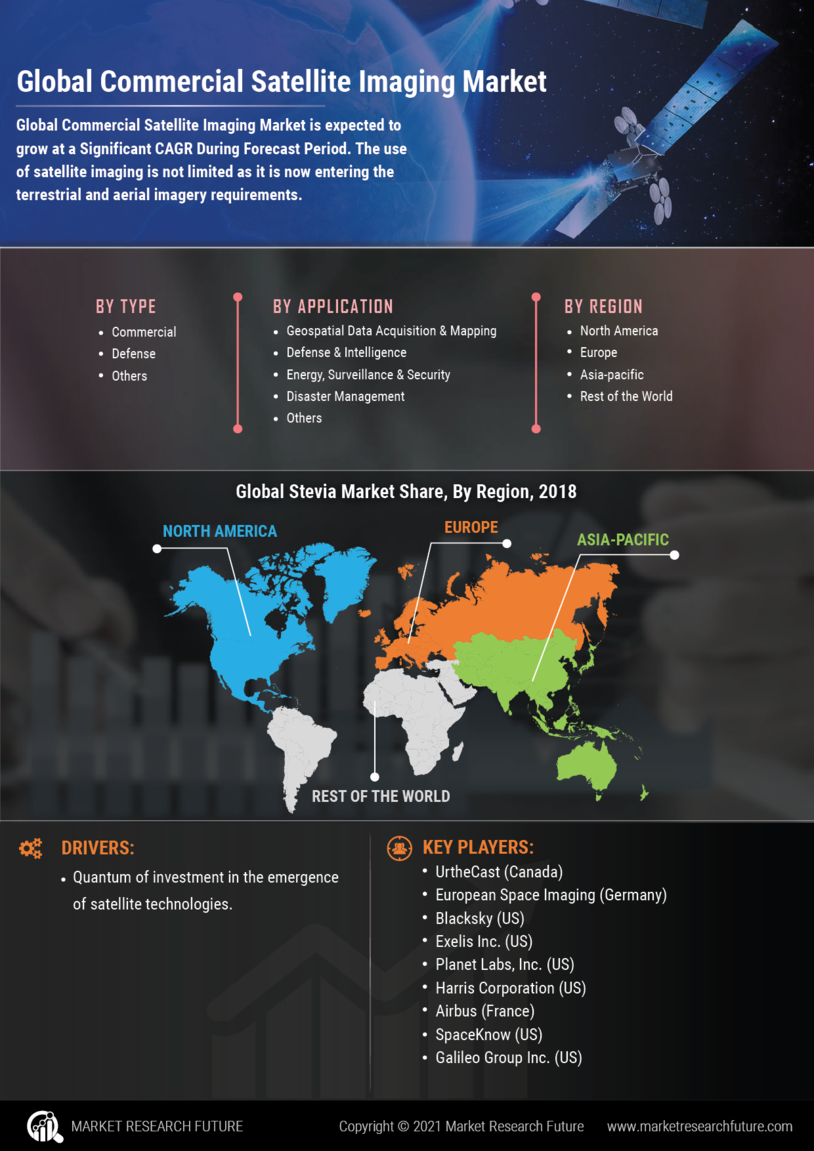 Commercial Satellite Imaging Market is expected to grow at a Significant CAGR During Forecast Period. The use of satellite imaging is not limited as it is now entering the terrestrial and aerial imagery requirements. The market operations are limiting the geographical reach restrictions. The market aims at a comprehensive coverage and helps in maintaining a quick delivery of image data on requirements.

Since the coronavirus pandemic came into the picture since its initial cases reported in Wuhan, China, there have been endless troubles for various industries, businesses, manufacturing, and production units. The pandemic struggles have been such that due to the lockdown and restrictions imposed by the government have led to the unavailability of raw material which is hampering the ability of the manufacturing and production units to meet the demand of the regular market customers and maintain a constant supply chain mechanism. Also, fearing the risk of infection, many employees and workers are sitting back and avoiding going to work. This unavailability of the workforce is pushing people to shut down their business units and manufacturing department.

However, the rising government support is impacting the global Commercial Satellite Imaging Market functions positively. Most of the governments of various regional locations are lending their support to firms by increasing their investment in the market operations undertaken by prominent market players.

The Australian government is increasing its quantum of investment in the emergence of satellite technologies in various regions. Recently, the government sector came forward to spend as many as USD 260 million during the ongoing forecast period for increasing the attempts related to the development of satellite technology and further, creating various and elaborated employment opportunities for the Australian population. Most of the countries are increasing their defense and military budget owing to the diverse need for the development of security programs, making the defense sector one of the major users of the market operations and applications. Similar trends are likely to expand the market operations and hence, help the market reach the expected market valuation by the end of the forecast period.

One of the major restraints for the market on the way of its growth during the ongoing forecast period. is the lack of awareness of the market applications amongst the target audience. Also, in extreme and critical cases, the governments of various global locations tend to come up with shutter control policies that might push for the requirement of the foreign satellites that are a part of the territorial airspace to shut down the imaging equipment, thus, causing the market to enhance its operations and grow at a slow rate.

The commercial satellite imaging market analysis predicts that the rising support from the public sector is pushing the prominent market players to use investment in the right way and come up with the development of improved solutions for the future of the market. For instance, one of the market players - BlackSky took a loan worth USD 50 million from an Intelsat satellite powerhouse that will help in boosting its nascent earth observation constellation. The company further came up with an announcement to invest its capital to build on various alliances and assets. Various military and defense applications are increasing in their use of commercial satellite imaging and the growth can be attributed to surveillance and security reasons that form a part of the core functionalities of the defense companies. All these steps promise good growth for the market operations by the end of the forecast period.

The commercial satellite imaging market has been divided all across the globe based on the application, end-user, type, and regions.

The market has been divided all across the globe based on the application into disaster management, surveillance and security, construction and development, energy, defense and intelligence, geospatial data acquisition and mapping, and many others. The largest market share is held by Geospatial Information acquisition and mapping.

Based on the End-Users

The market has been divided all across the globe based on the end-users into the defense sector and commercial sector.

The commercial satellite imaging market has been divided all across the globe based on the region into North American region, Asia-Pacific region, European region, Latin American region, and the Middle East and African region. The largest market share in the commercial satellite imaging market all across the globe is held by the European region owing to increasing development in the infrastructure for image regulation and image collection builds a positive environment for this type of technology to grow.

The second-largest market share in the commercial satellite imaging market all across the globe is held by the North American region owing to the presence of various powerful countries like Canada and the US. Moreover, the presence of the most prominent major key players also acts as a contributing factor.

Being the fastest-growing region, the third-largest market share in the commercial satellite imaging market is held by the Asia-Pacific region owing to the presence of highly populated countries like China and India which creates more demand during the forecasted period. High disposable income is another contributing factor.

The most prominent major key players in the Commercial Satellite Imaging Market all across the globe are mentioned below:

These major key players use various strategies to sustain their market position in the commercial satellite imaging market in the global market by going for mergers, and acquisitions, by collaborating, setting up a new joint venture, establishing a partnership, developing a new product line, innovation in the existing product, developing a new production process, and many others to expand their customer base in the untapped market of the commercial satellite imaging all across the globe.

What are the key applications of Commercial Satellite Imaging Market?

What are the some of the key trends in the industry?

Some of the key trends in the industry are hyper-spectral image processing for automatic target identification purposes.

What CAGR can the Commercial Satellite Imaging Market expect to procure in the coming years?

The Commercial Satellite Imaging Market can expect to procure a CAGR of more than 12% in the coming years.

What are some of the top Commercial Satellite Imaging Market contenders?

What are some of the key growth inducers in the Commercial Satellite Imaging Market?

Some of the key growth inducers in the market are development in high resolution satellite imagery, for applications in data related sectors such as agriculture and natural resource managing, is also a factor supporting the growth of global commercial satellite imaging market.

Commercial Satellite Imaging Market is predicted to grow at approximately 11.6% CAGR by 2023