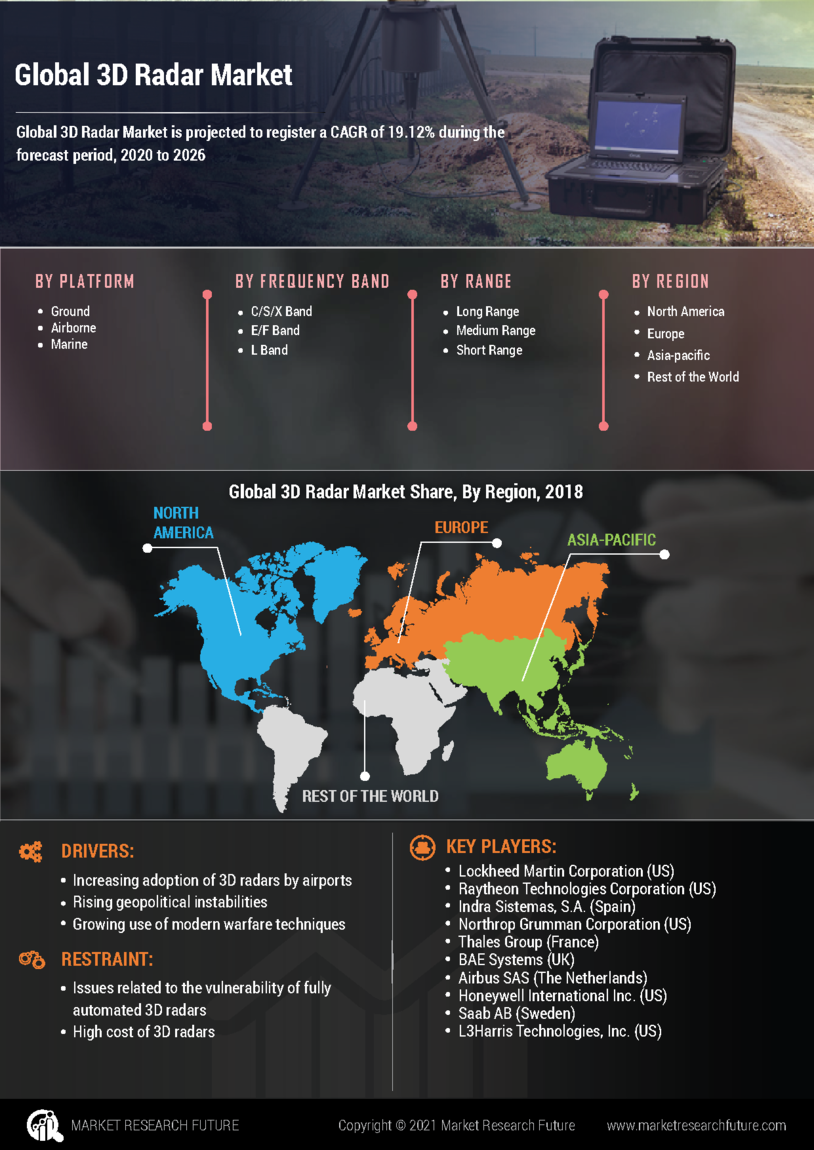 3D Radar Market is projected to register a CAGR of 19.12% during the forecast period, 2020 to 2026. 3D radar is used for weather monitoring, surveillance, and security purposes, mainly in the defense sector. 3D radar offers three-dimensional views in terms of range, bearing, and elevation. A 3D radar is used to measure all three space coordinators in the radar system.  For weather monitoring, a narrow pencil beam is used. The elevation of the antenna changes after scanning each rotation. 3D radars can be used for various applications and can be customized according to the end-use requirements, owing to their wide range of antenna arrays. 3D radars also assist in the detection and classification of the target based on their size and speed. Hence, such benefits offered by 3D radars are expected to drive the growth of the 3D Radar Market.

However, issues related to the vulnerability of fully automated 3D radar and the high cost of development might hamper the growth of the global market.

Miniaturization of 3D radars and the growing adoption of advanced materials to manufacture lightweight 3D radars are expected to drive the growth of the 3D radar market.

What growth rate is the Global 3D Radar Market touted to secure in the coming years?

Global 3D Radar Market is touted to secure a growth rate of 19.12% in the coming years.

What are the growth boosters in the Global 3D Radar Industry?

The growth boosters in the market are the amplified demand for advanced warfare techniques and surge in the use of air & missile defense systems. The high deployment rate of 3D radars at airports for better surveillance provision for the pilots could also boost the market growth.

What can be a major Global 3D Radar Market trend in the coming years?

A major market trend in the coming years can be miniaturization of 3D radars combined with the surging use of advanced materials to manufacture lightweight 3D radars.

The ground segment has remained in the lead in the Global 3D Radar Market since 2019.

Which region can procure the fastest growth rate during the review period?

APAC can procure the fastest growth rate during the review period.