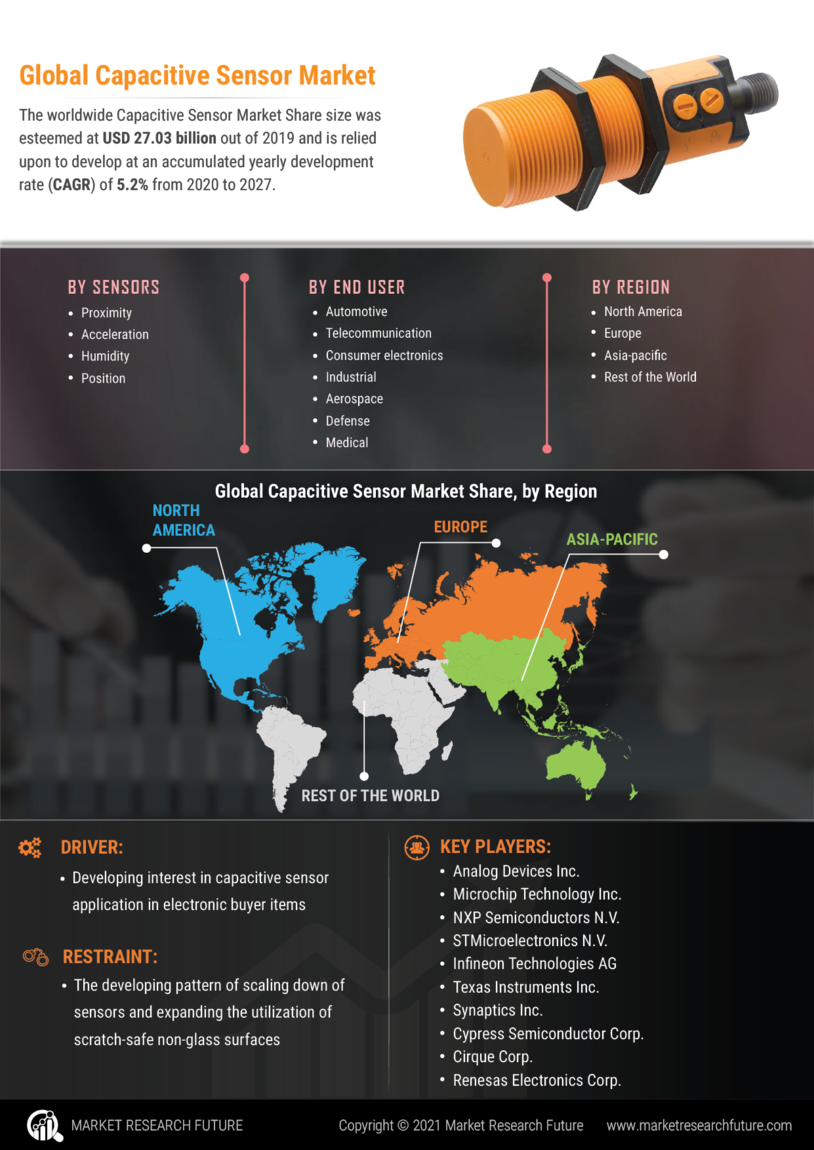 Globally, the size of capacitive sensor market is expected to boost at a CAGR of 5.2%, with a value of USD 27.03 billion over the projected 2020-2027 driven by development openings later on with the rising interest for capacitive sensors in the worldwide market.

The capacitive sensor is a proximity sensing device in the presence or absence of electrically charged components in a particular material. The sensor consists of a probe that measures the target's distance, an electronic driver to convert the oscillation changes into voltage, and an electronic device to indicate and record the resulting voltage change. It is generally used to detect and measure positive, proximity, and acceleration in various devices like phones, tablets, laptops, trackpads, automobiles, and aerospace components. Compared to the traditionally used resistive or inductive sensors, capacitive sensors are more durable, sensitive and provide more accurate measurements. As a result, they find extensive applications across various industries like consumer electronics, aerospace, healthcare, food and beverage, and automotive.

The significant growth in the consumer electronics industry across the globe, along with the rising automation of complex manufacturing processes, is one of the key factors that positively impact the market. Capacitors sensors facilitate process control in manufacturing units by detecting the presence and position of unwanted metal objects, especially in smartphones, laptops, tablets, and gaming consoles. However, the widespread utilization of the touchscreen display systems for human-machine interaction boosts the growth of the market sectors.

The COVID-19 pandemic hugely affects the lifestyle across the world. As per the Capacitive Sensor Market Report each business needs to take on the conflict on the two fronts: wellbeing and financial and should persevere through this season of the constrained downturn. With the worldwide monetary slump running into trillions of dollars, hypotheses are overflowing that the recuperation period may run well into right on time one year from now.

The lone way out of this winding is to plan through this pandemic interruption. We accept that organizations will profit from an incredible arrangement from our well-suited experiences into the market. We bring to you undeniable level reports that will reveal insight into the situation of various modern verticals.

These industry reports rapidly catch the significant impact that the pandemic has had on different industry verticals. The bits of knowledge will contain as Fast disregard of the adjustments in the crucial lists of ventures and Compact read of the circumstance in essential nations.

Our investigators continually contemplate the business sectors and draw in with critical industry specialists to furnish our customers with the best bits of knowledge into their business sectors.

The Capacitive Sensor Market Size was esteemed at USD 25.11 billion out of 2020 and is relied upon to arrive at USD 34.50 billion by 2026, recording a CAGR of 5.5% during the conjecture time 2021-2026. The increment in the customer hardware industry application drives the capacitive sensor market in the estimated time frame.

The opportunities include development openings and drivers just as difficulties and restrictions arise only as evolved districts.The Market elements situation, alongside development chances of the market, will come for better results in the years.


Declining interest for across-the-board PCs and a short stockpile of indium tin oxide is the key elements controlling the development of the capacitive sensor market. Moreover, the absence of general guidelines makes it hard to anticipate a sensor's exhibition from a bunch of details, in this manner going about as a test for the capacitive sensor market.Vital participants in this market are centered on essential associations, coordinated efforts, arrangements, and new item dispatches to build their income.


The element that antagonistically influences the market's development is the trouble looked at in the assembling and creation cycle of innovations. Likewise, the non-glass surfaces in capacitive sensors are not ridiculing verification and are in the creating stage.The Capacitive Sensor Market Growth is developing worldwide; this expanding push presents immense freedoms for players across the worth chain.

This market study covers different non-glass surfaces, which can be utilized as a substitution of glass in touch-screen show coatings for showing up at the capacitive sensor market for non-glass surfaces market size from 2013 to 2020.

In the wake of showing up at the available market size, the all-out market has been part into a few fragments and sub-segments, which are then checked through essential examination by leading general meetings with key individuals like CEOs, VPs, chiefs, and heads. This Capacitive Sensor Market Analysis triangulation and market breakdown systems have been utilized to finish the general market designing measure and show up at the specific insights for all portions and sub-segments.

The worldwide types of capacitive sensors are sectioned based on sort, end-client. Based on sort, the market is fragmented as contact sensors, movement sensors, position sensors, others.By End-User

Based on end-client, the market is portioned as shopper gadgets, car, oil and gas, medical care, food and refreshments, aviation and guard, others.By RegionThe report gives a definite outline of the business, including both subjective and quantitative data. It provides an overview with an estimate of the worldwide Capacitive Sensor Market Demand dependent on different sections.

It gives the market size and figure gauges from the year 2017 to 2027 regarding five significant districts: North America, Europe, Asia-Pacific (APAC), Middle East and Africa (MEA), and South America. The Capacitive Sensor Market Forecast by every district is later sub-sectioned by separate nations and fragments. The report covers the investigation and conjecture of 18 countries worldwide alongside the latest thing and openings winning in the locale.

The report is meant to highlight the global Capacitive Market growth potential in terms of its revenue hike by the end of the forecast years in 2027.

The segmentation table is as follows:

How big is the global capacitive sensor market?

Who are the top players in the global capacitive sensor market?

Which region holds the largest share in the global capacitive sensor market?

What are the significant tailwinds pushing the development of the worldwide capacitive sensor market?

A. Developing a combination of touch boards inside the medical services industry, rising number of ATMs and office gear, and expanding utilization of capacitive sensors in business and mechanical, electronic frameworks are significant tailwinds pushing worldwide development capacitive sensor market.

Which is the most significant application fragment in the worldwide capacitive sensor market?

Medical services are the most significant application fragment in the worldwide capacitive sensor market.