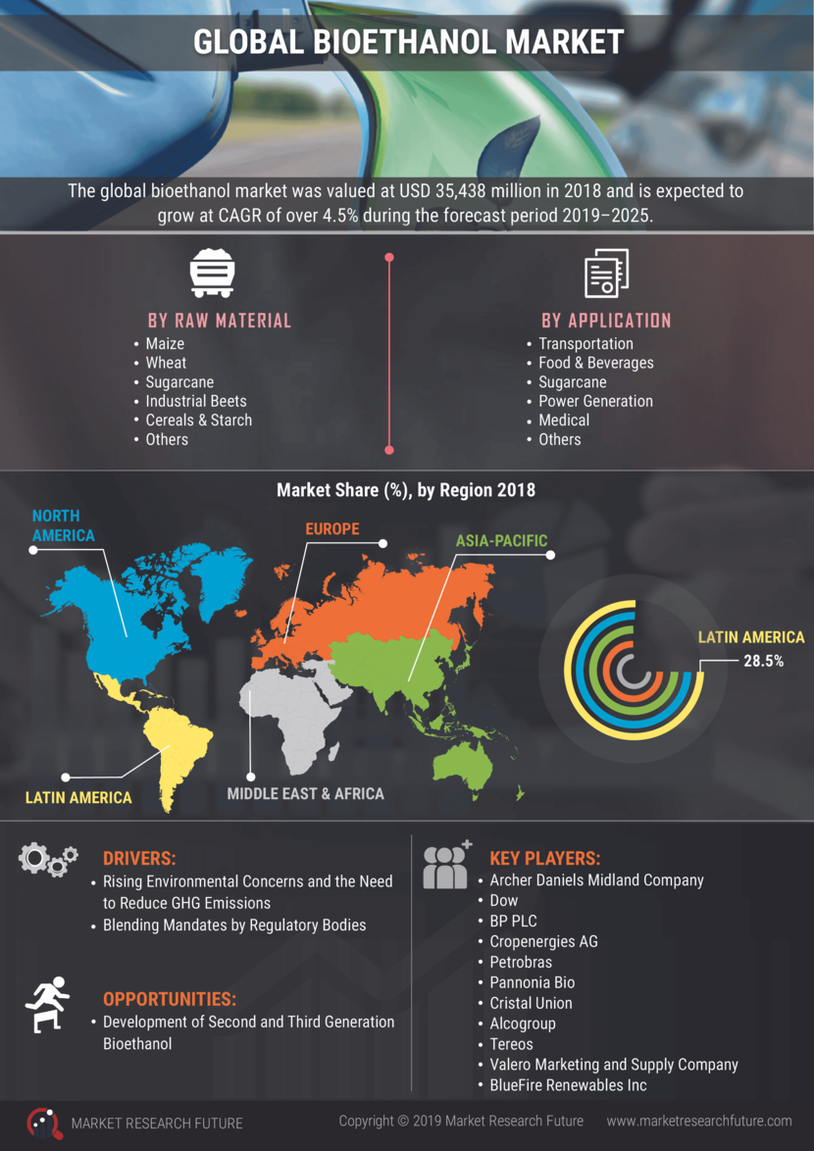 Bioethanol Market value is registered as USD 58.44 billion and is anticipated to grow at a significant rate of 7.65% CAGR with the bioethanol market size is USD 85.71 billion during the forecast period (2022-2030).

The  bioethanol market is projected to register a CAGR of 7.65% from 2022 to 2030. The growing need for sustainable alternative fuels, the depletion of natural resources, excessive greenhouse gas emissions, and growing energy usage are major market growth factors. The  bioethanol market size is expected to reach approximately USD 85.71 billion by 2030. Moreover, technological advancements and increasing R&D to produce ethanol from algae are expected to boost the demand owing to its faster production rate and natural occurrence in the sea, reducing production costs.

The COVID-19 pandemic negatively impacted the bioethanol industry. This was partly owing to the decline in car usage during the restriction. In addition, production sites and the distribution network were temporarily closed owing to the strict government regulations implemented to stop the COVID-19 disease from spreading. As a result, bioethanol sales have reduced ly.

The good output of governmental regulatory agencies is the main force behind the growth of the worldwide market. The industry is expanding due to rising government initiatives to produce and utilize cleaner fuels like bio-ethanol and rising demand for gasoline blends. Manufacturers are concentrating on creating better, cleaner, and more affordable energy due to the implementation of strict rules. The industry's technological advancements have resulted in the creation of second and third-generation bioethanol, which is anticipated to continue to hold promise on the international market. Moreover, less mileage and shifting the focus to bio-butanol limit the market's growth. The decrease in production and sales of the automotive industry is also influencing  market growth. The factors boosting the  market are growing environmental concerns, encouraging companies to manufacture bioethanol, blending mandates from regulatory bodies, and sufficient raw material availability.


Government regulatory bodies assisting in production are the key drivers of the  bioethanol industry. The market is developing due to increased government initiatives to produce and use cleaner fuels, including bio-ethanol, and rising demand for blending in gasoline. Due to stricter laws, businesses are working to provide greener, better, and much less expensive energy. Market technology advancements influenced the development of second and third-generation bioethanol, and it is anticipated that this product will continue to hold promise in the  market. Producers are generating bioethanol due to growing environmental concerns, blending regulations from regulatory organizations like the EPA (Environmental Protection Agency), and abundant raw materials available in the world market.


The market is expected to be constricted in the nourishing term as the usage of electric cars grows. Sales of electric vehicles have risen in recent years, and this trend is predicted to continue over the forecast period. According to the International Energy Agency, the worldwide electric vehicle stock topped ten million units in 2020, a 43% increase from 2019. The  electric car industry is booming. As a result, the demand for fossil and bioethanol fuels would fall. As a result, the bioethanol industry is expected to be suffocated over the forecast period as the usage of electric cars grows.


One of the primary factors positively affecting the market is the suburbanization trend and increased sales of passenger automobiles ly due to rising disposable incomes. Furthermore, consumers' rising environmental concerns push the desire for bioethanol as a substitute for fossil fuels. Aside from that, improved road transportation networks are increasing the usage of commercial cars. Because these cars contribute significantly to air pollution and traffic congestion, governments in many countries enact severe rules to reduce pollutant emissions and encourage bioethanol use. Furthermore, bioethanol is used in current engines to minimize carbon monoxide emissions, helping to enhance the overall air quality.


Bioethanol is widely utilized as a carrier or solvent in personal care products and cosmetics across the globe since it is skin-friendly and safe for the environment and health. It is also used as a main component in the pharmaceutical business to make medications, cough syrups, medical capsules, and disinfectants. Furthermore, it is gaining popularity as a flavor enhancer in the food & beverage (F&B) business.

The  bioethanol market segmentation, based on raw material, is maize, wheat, industrial beet, sugarcane, cereals & starch. The  bioethanol market growth was prominently high under the maize category in 2021 due to its large-scale production and easy obtainability. Most of the bioethanol generated in the US is derived from starch-based maize and processed in a dry or wet mill. However, sugarcane is to be the fastest-growing category due to the growing usage of sugarcane to produce bioethanol. 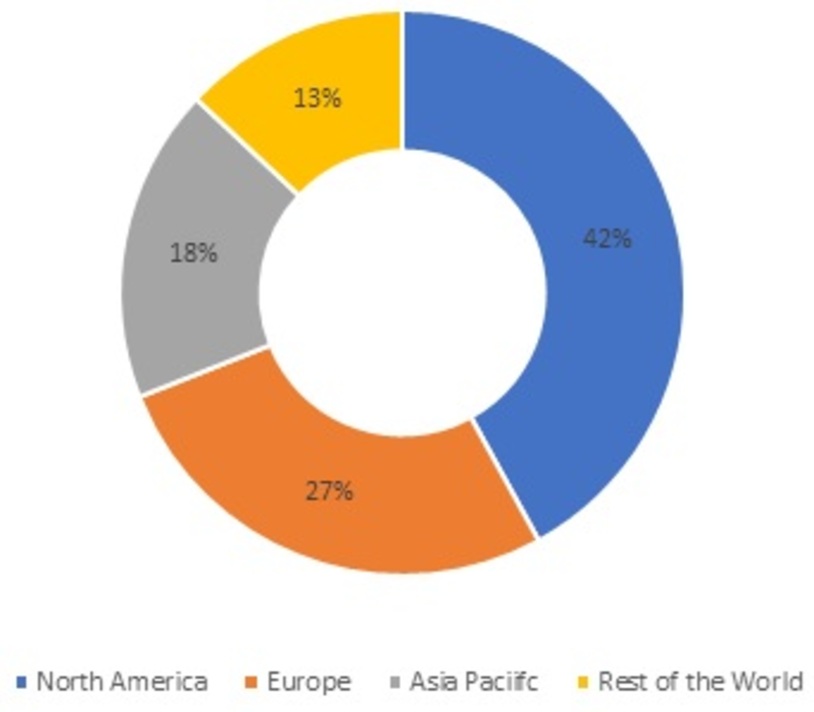 By region, the  bioethanol market has been divided into North America, Europe, Asia-Pacific, and the Rest of the World. North America accounted for the most extensive market share. Europe will exhibit the highest CAGR during the forecast period.

North America dominated the market share in 2021 owing to growing approvals and government backing for creating eco-friendly and sustainable fuels. Nations have mandated the use of higher mixes in cars in this region. Due to greater renewable fuel standard requirements and rising domestic motor gasoline consumption, which is currently mixed with 10% ethanol by volume, bio-ethanol output has increased. The vast amount of maize grown in North America has made the region's bioethanol industry attractive and fruitful. According to figures released by the US Department of Energy, the US will generate more than 13.9 billion gallons of ethanol in 2020, making it the largest producer in the world. Furthermore, bioethanol blends in automobiles are required in the USA and Canada. Aside from favorable biofuel regulations, the industry is being spurred forward by significant growth in corn-based production of bioethanol, increased crop yields, and a growing emphasis on energy efficiency.

Due to the abundance of raw resources and increased demand from the automobile sector, Europe had the second-largest market share in the world in 2021. Over the period, it is anticipated that improvements in environmental legislation in the region will favor the use of bioethanol in end-use sectors.

The market includes tier-1, tier-2, and local players. The tier-1 and tier-2 players have  reach with diverse product portfolios. Companies such as ABB Ltd. (Switzerland), Fanuc Corp. (Japan), Kuka AG (Germany, Yaskawa Electric Corp. (Japan) Inc. (US), and Bluem (US) dominate the  market due to product differentiation, financial stability, strategic developments, and diversified regional presence. The players are concentrating on supporting research and development. Furthermore, they embrace strategic growth initiatives, such as product introduction, development, joint ventures, and partnerships, to strengthen their market position and capture an extensive customer base. For instance, in May 2022, the fifth iteration of the Cellulose-to-Sugar ("CTS") device is on track, according to a statement from Blue Biofuels Inc. Testing and additional engineering toward higher quantities have begun. In addition, Blue Biofuels has established a plan for the future and hired K.R. Komarek Inc. to construct the CTS machine's successors from commercialization onward.

Scope of the  Bioethanol Market Report

To identify and infer the drivers, opportunities, restraints, and challenges in the  bioethanol market growth

To provide a detailed insight into the key companies operating in the market. The profiling will include the company's financial health in the past 2-3 years with segmental and regional revenue breakup, product offering, SWOT analysis, recent developments, and key strategies.

At what CAGR, the global bioethanol market is expected to grow during the forecast period of 2021 to 2028?

The global bioethanol market would record a CAGR of 7.65% during the forecast period encompassing 2021 to 2028.

What is the study period of the bioethanol market report?

What is the bioethanol market growth rate?

The market is expected to register a CAGR of ~7.65% over the next 10 years, according to  bioethanol market research.

What is the expected bioethanol market size by 2030?

Blending mandates will drive the bioethanol market to an estimated USD 85.71 billion by 2030.