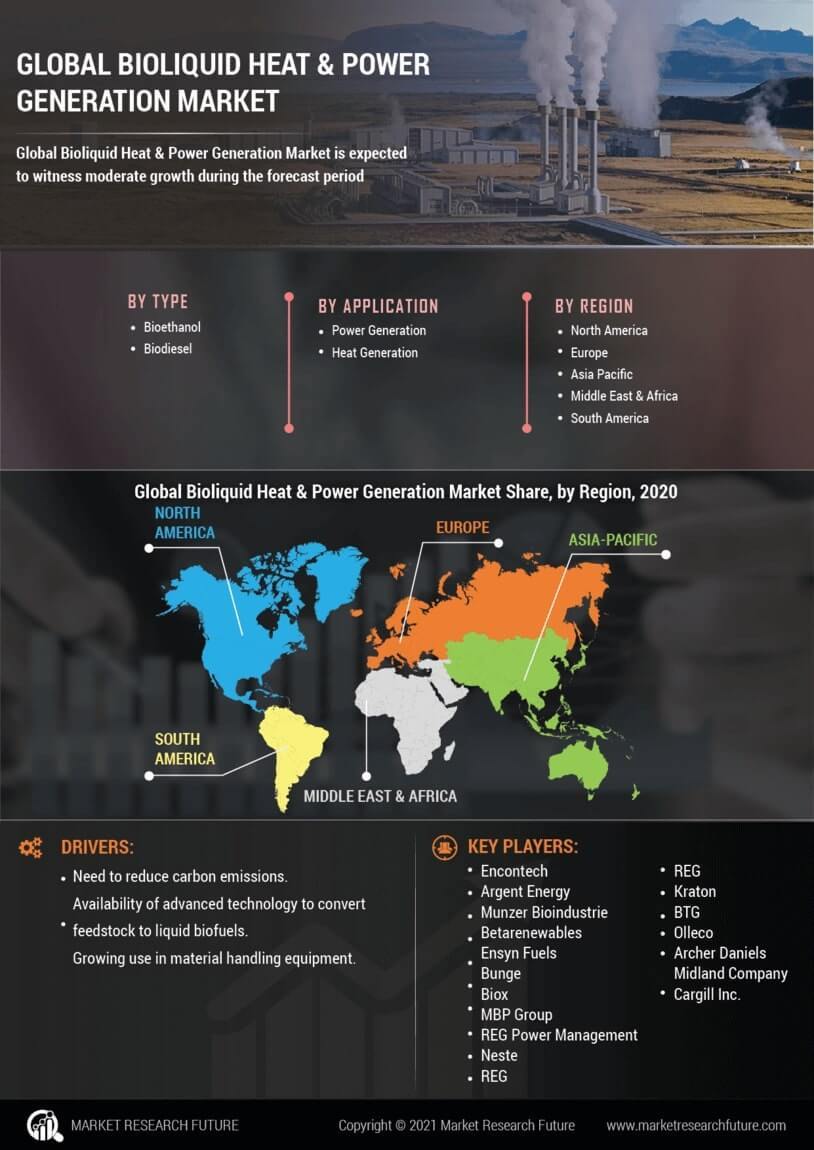 The  market for bioliquid heat & power generation market size is anticipated to reach approximately USD Significant value by 2030, at a CAGR of 7.6% from 2022 to 2030. One sort of fuel called bioliquids is made from renewable resources, including animal fats, rapeseed, wheat, and cooking oil that is farmed and harvested specifically for making fuel. There are two types of bioliquids: those with 100% renewable content and those with 100% bioliquid mixed with mineral heating fuels like kerosene and gas oil. Due to its potential to lessen or completely remove reliance on fossil fuels, bioliquids are predicted to experience an increase in demand. These more environmentally friendly energy options employ plant-based raw materials during manufacturing and emit no carbon dioxide during combustion. Growing environmental awareness and the depletion of fossil fuel-based resources are two factors that are predicted to propel the industry. Additionally, it is projected that the existence of varied regulatory frameworks and tax benefits around the globe will drive bioliquid producers to increase their R&D expenditures to commercialize the newest second and third-generation technology. In uses like transportation, emerging economies like Brazil, China, India, and some of Europe aspire to replace 5% to 20% of all fossil-based fuels with biodiesel.

The COVID-19 outbreak has had a significant negative impact on practically all enterprises. The pandemic has affected various industries, including electrical and electronics, automobiles, semiconductors, food and drinks, and airplanes. Similarly, during the epidemic, the bioliquid heat and electricity generation industry experiences temporary setbacks. The lockdown caused several issues for the manufacturing sectors, including supply chain interruption, a labor shortage, and a shortage of raw materials. This circumstance causes a halt in manufacturing and lowers consumer demand for the good. Following the post-lockdown period, the bioliquid heat for power generation market expanded quickly and paid investors back.

The government's expanding support for green energy is causing the bioliquid heat and electricity generation market to expand significantly. One of the major drivers of market growth is the growing production of bioliquids for use in the generation of heat and power. The market is expanding due to more nations' increased desire to combat  warming and greenhouse gas emissions using fewer fossil fuels. The expansion of the market is being driven by technological developments that transform feedstocks into liquid biofuels and greater waste recycling that supports the manufacturing of bioliquids. An enormous potential opportunity is being created for the market due to the increased focus and strengthening of the regulatory environment for bioliquids and renewable energy.


The results of human-caused climate change pose a threat to humanity. Among other effects, it has caused the ecological disturbance, altered weather patterns, and  warming. To lessen the worst effects of man-made climate change, there is an urgent push to decarbonize the world's energy supply. At the COP26 conference in November 2021, international countries announced a historic commitment to achieve carbon neutrality by 2050. Massive investments must be made in renewable energy if the goal to achieve carbon neutrality within the specified timeframe is to be kept. The investments are also considered an economic stimulus to revive national economies following the pandemic's decline. Numerous governments have invested significant money to develop sustainable renewable energy technology.


Investments in the capacity to produce bioliquid decreased by over 30% in 2019, primarily due to developments in China, where investments in ethanol production facilities were cut in half from the previous year. China has stopped the country's 10% ethanol blending rule from being extended nationwide to reduce competition for maize production and maintain food security. The 10% blending policy is still being implemented in some new areas. Thus 2020 may see an increase in investment in China, supported by newly built facilities. However, it is anticipated that shutdowns of bioliquid production capacity in the United States and Brazil in 2020 may limit the near-term desire for additional investments due to declining gasoline demand.


In the transportation sector, petroleum fuel accounts for more than 70% of consumption. It is anticipated that the globe will run out of petroleum oil by 2070–2080 due to the rapid rise in petroleum consumption. Since they are nontoxic, sulfur-free, biodegradable and come from renewable sources, bioliquids are being developed to replace petroleum. Based on the feedstock, bioliquid is divided into four categories: first, second, third, and fourth-generation biofuels. The first generation of biofuels is produced from sugar, starch, and oil-based plants. For instance, in January 2021, Malaysia's Palm Oil Board revealed plans to develop a nationwide B20 palm oil biofuel scheme by the end of the year. Initially introduced in January 200, the requirement to produce biodiesel with a 20% palm oil component called B20 for the transportation sector encountered difficulties because of the pandemic.

The  bioliquid heat & power generation market segmentation, based on type, is bioethanol and biodiesel. Bioethanol had the majority of the world's bioliquid market share. The benefits of fuel and high production rate are the main causes of the segment's rapid expansion. Compared to fossil fuels and other biofuels, the fuel results in an 85% reduction in greenhouse gas emissions, mainly nitrogen oxide, and a 30% reduction. However, in 2021, biodiesel showed considerable growth as in comparison to petroleum diesel, biodiesel emits less carbon monoxide, sulfates, unburned hydrocarbons, and particulate matter. Emission levels are greatly reduced when biodiesel is added to new and old diesel engines.

The  bioliquid heat & power generation market segmentation, based on application, is power generation and heat generation. In 2021, the heat generation sector dominated the market. The strict regulatory frameworks implemented in important regions like North America and the EU are responsible for this increase. The market for industrial heating equipment is driven by an increase in consistent and ongoing energy demands from sectors of rising economies such as those in China, India, Japan, and Brazil. In addition, the power generation segment showed considerable growth. Power generation operations have expanded ly due to an increase in electricity demand. Traditional biomass combustion, typically employed in rural parts of developing nations for activities like cooking and small-scale agriculture, is anticipated to create a variety of environmental pollution. 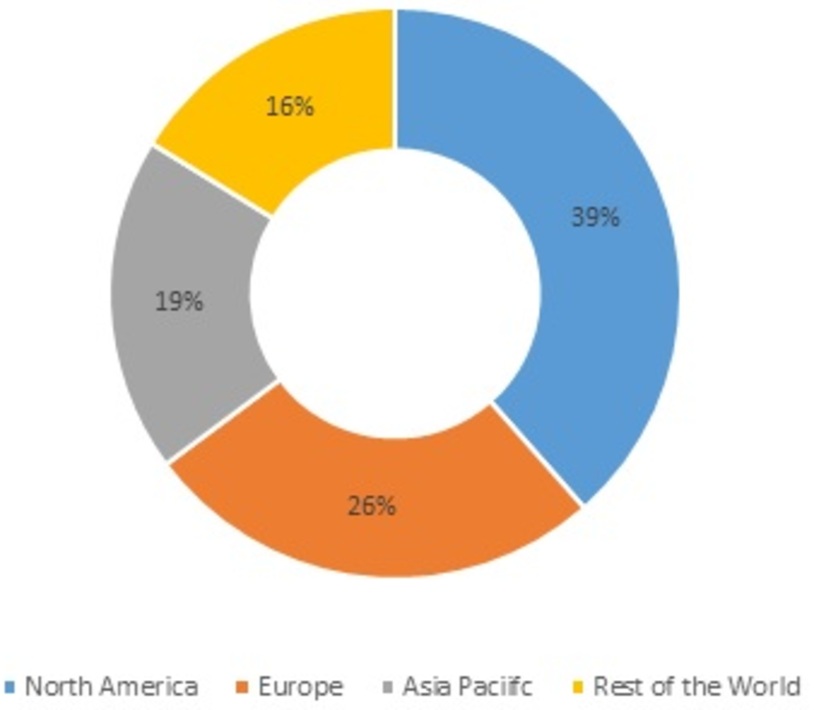 By region, the  bioliquid heat & power generation market report has been categorized into Europe, Asia-Pacific, North America, and Rest of the World. North America accounted for the most extensive market share. Europe is projected to showcase the highest CAGR during the review period.

In terms of revenue, North America's bioliquid market dominated in 2021. This is due to increased pollution and government efforts to switch to bioliquid to lessen environmental harm. To counteract  warming and encourage more environmentally friendly economic development, the governments of the U.S. and Canada announced in 2021 that they would endeavour to achieve net-zero emissions by the year 2050. The Canadian government's Clean Fuel Standard (CFS) initiative is a key strategy for lowering emissions and promoting the use of clean fuels in the transportation sector. These activities should increase the demand for bioliquid in the area.

Europe encountered the fastest growth rate in 2021. Recent industry advancements in biofuel-based energy generation have given the European region access to high levels of industry expertise. Furthermore, the area already enjoys a wealth of biomass that can be exploited to produce bioliquid. With a 38% participation in the electricity mix in 2020, the region saw renewables surpass fossil fuels in the power industry. By 2050, the nation aims to be carbon-neutral and generate about 55% of its energy from renewable sources. As a result, the government has undertaken several programs to raise this percentage in ultimate energy use even further. These developments are expected to lead to a large increase in the market for bioliquid heat and power generation.

The market includes tier-1, tier-2, and local players. The tier-1 and tier-2 players have  reach with diverse product portfolios. Several businesses, including Archer Daniels Midland Company, MBP Group, Ensyn Fuels, and Argent Energy, compete in the worldwide bioliquid heat & power generation market thanks to their unique products, sound financial standing, innovative strategic plans, and regional presence in a variety of regions. The participants are focusing their efforts on promoting R&D. Additionally, they support strategic expansion activities, including product launches, joint ventures, and partnerships to expand their client base and boost their market position. For instance, in December 2021, Stanlow Terminals announced the development of the United Kingdom's largest biofuel storage hub in the northwest of England as part of a focus on emerging prospects in the context of the energy transition and net-zero ambitions. Furthermore, in June 2020, the US government opted to renew the granting of a tax credit for biodiesel and renewable diesel production. The biodiesel tax credit (BTC) is expected to be extended through 2022 to improve the production levels of fuels for use in various sectors.

The study's goals are outlined in five stages. They are listed below:

To recognize and extrapolate the market's drivers, constraints, opportunities, and difficulties

To offer a thorough understanding of the key businesses active in the sector. The company's financial performance over the last two to three years will be profiled, along with regional and segmental revenue breakdowns, product offerings, current advancements, SWOT analyses, and important business initiatives.

How long has this market been under study?

What is the pace of growth of the worldwide market for bioliquid heat & power generation?

Over the next 10 years, the  market for bioliquid heat & power generation is expected to increase at a CAGR of 7.6%.

Who are the major participants in the market for bioliquid heat & power generation ly?

Bioliquid Heat &amp; Power Generation Market Size To Expand at a Notable CAGR Of 7.6% During 2022...