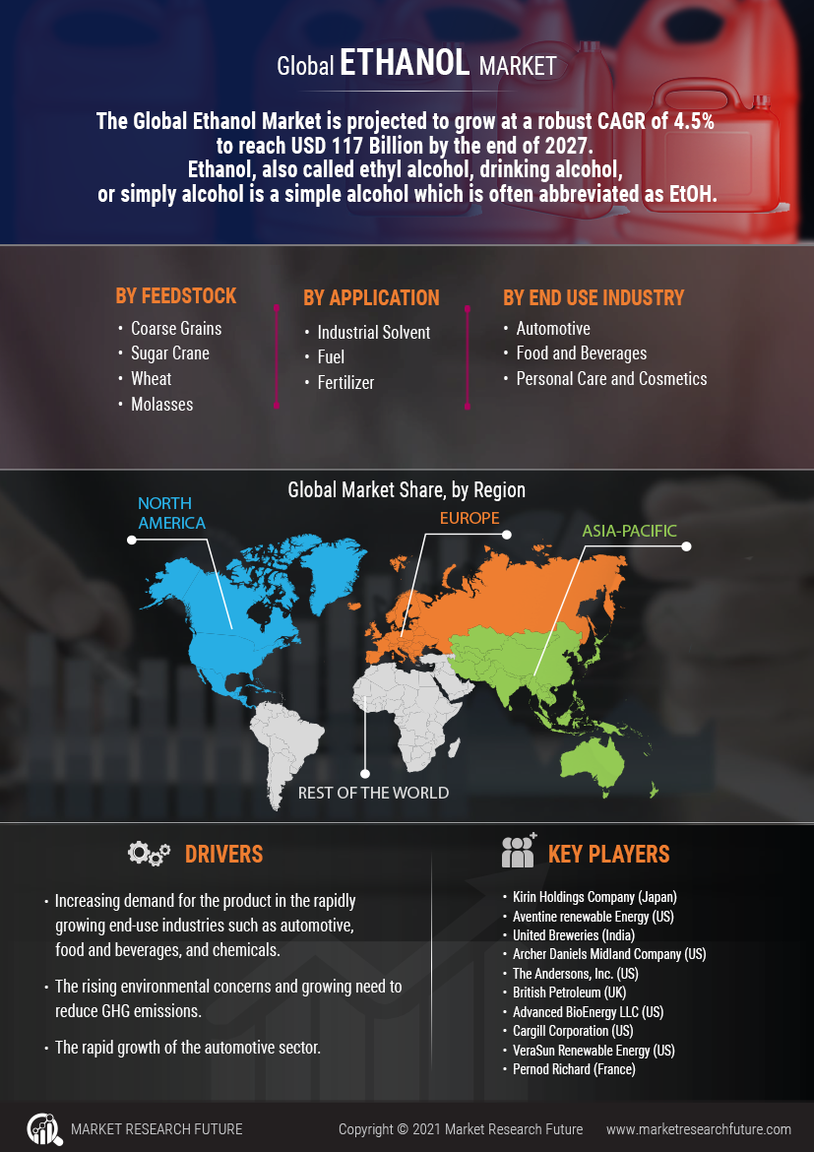 As of the most recent research study, the global ethanol market size is estimated to hit USD 117 billion by the end of the year 2027.

As of the most recent research study, the global ethanol market size is estimated to hit USD 117 billion by the end of the year 2027, growing at a healthy growth at a CAGR of 4.5 percent. An ethanol shorthand knew as EtOH, or ethyl alcohol, consuming alcohol, or just alcohol, describes a kind of alcohol. These properties make this chemical very combustible. Ethanol is a naturally occurring colorless liquid with a unique aroma. It's a versatile chemical that can be made in two ways: synthesized and organically. Another kind of biofuel that may be produced from sugarcane, as well as other starchy crops, is bioethanol. Many varieties of alcoholic beverages include a psychedelic substance that directly affects the brain. This substance is employed as a solvent when it comes to the chemical sector.

Beyond the ever-expanding, end-use sectors, such as the automobile and food companies, as well as chemicals and other industrial products, one of the most critical drivers driving the ethanol market's value is an increasing demand for ethanol. Because of the expanding need to decrease carbon dioxide emissions and environmental concerns, the ethanol market has seen significant development, and it is anticipated to remain to be a primary driving factor during the projected period. In addition, several elements in the automobile industry contribute to the fast expansion of this industry, particularly fuel economy, vehicle light-weighting, and environmental laws. According to the forecasts, these variables will be favorable to market expansion in the following years.

In the days leading up to and after the summit, the experts explored covid- 19 different implications. Despite the obstacles that financial and operational growth has encountered as a result of the crisis, the paper outlines the advantages that have resulted as well. In addition to implementing dramatic action to overcome the previous economic downturn, the ethanol industry has also established new tactics and enhanced its development capabilities. In order to maintain activities on regional and worldwide marketplaces, the market has looked at a variety of sources of financing and business approaches.

As a biofuel, ethanol usage is a substantial contribution to the market. With the fast rise of the automobile sector, there have been several issues in the regulation of environmental pollution in the latest days, particularly in urban areas. The goal is to fight growing air pollution produced by cars by mixing ethanol with gasoline at concentrations of up to 10 percent and 15 percent, respectively. In addition, the use of ethanol provides significant advantages in terms of enhancing fuel economy and thermal performance and assisting with cold starts in the wintertime. In terms of the usage of ethanol as just a biofuel, the United States plus Brazil are the two most advanced nations globally.

Fuel with 4 to 5 percent ethanol is currently blended with gasoline in India. According to official projections, however, ethanol blends of 10 percent with gasoline are expected by 2022, and 20 percent are expected by 2030. The amount of bioethanol required to achieve this 10 percent mix would be 3.3 billion liters, which is likely to provide the significant commercial potential for Indian sugar factories in the future years.

Drinking excessive amounts of alcoholic drinks may harm the human body, particularly the liver, removing toxins from the bloodstream. As a result, chronic liver disease, also known as cirrhosis of the liver, is more likely in those who use alcohol for an extended period. Other side effects include forgetfulness and a shortage of cognition, slowed motor responses, ataxia, balance issues, distorted eyesight, and diminished feeling. Increasing understanding of these negative consequences might impede ethanol market growth to some degree.

An obstacle to further worldwide ethanol industry expansion is, unfortunately, increasing the costs of raw materials. To put it another way, in 2018, the USDA predicts a 3.31 percent decline in the worldwide output of maize, down from 1031.86 million tonnes in 2017. Because of this, there will be a shortage of maize and a consequent increase in the price of corn-based ethanol. However, due to fluctuations in raw material output, this constraint is projected to remain moderate throughout the projection period.

As of the third quarter of 2019, around 67.47 million cars were manufactured worldwide; this figure is expected to drop to approximately 52 million vehicles in the third quarter of 2020, representing a fall rate of roughly 23%. As a result, there was a decline in the need for vehicle fuels, which had a detrimental influence on the development of the ethanol industry.

When it comes to advertising the price of bioethanol, the reality that ethanol contains about 30% less fuel per liter than gasoline is a significant factor to consider. So the cost of bioethanol would have a considerable influence on the amount of bioethanol used as a transportation fuel.

According to the reports, The worldwide ethanol market is segmented into four categories: form, product, end-use, and geography. The worldwide ethanol market has been segmented based on feedstock analysis into sugar beet, coarse grains, biomass, wheat, sugar cane, maize, molasses, and other types of feedstock. The market has been divided into the following categories as a consequence of the application-based division: industrial solvents, fertilizers, fuel, energy, and others.

There are five market sectors, classified by end-use industry: pharmaceuticals, automotive, chemicals, food and beverage, personal care and cosmetics, and others. Automotive is the largest segment, followed by food service and chemicals.

The market is segmented on form, product, end-use, and geography. As a result, the global ethanol market trends are expected to witness decent growth during the forecast period.

The application is segmented into industrial solvents, fertilizers, fuel, energy, and others based on the application.

The market is segmented into pharmaceuticals, automotive, chemicals, food and beverage, personal care and cosmetics, and others based on the propulsion types.

The Asia-Pacific region leads sales of ethanol in numerous areas worldwide. Other dominant markets include North America, Europe, Latin America, and the Middle East. One of the world's fastest-growing solar markets is Asia-Pacific, accounting for around a quarter of global growth. Additionally, the chemical and pharmaceutical sectors are increasing their use of ethanol. The area's future is promising since both the renewable power and manufacturing industries are expanding at a rapid pace.

It is no surprise that North America uses the most ethanol in a world where it would be widely used as an alternative energy source. The market for ethanol may potentially grow in this area due to stringent environmental rules governing vehicle emissions, like the Corporate Average Fuel Economy standard. In addition, the ethanol market in Europe is thriving. During the evaluation period, the business in this area is likely to develop as biofuels in well-established industries such as the automotive industry continues to expand.

Eco-friendly goods are likely to give new development opportunities for the industry participants. The supply chain has been altered due to recent events on the worldwide market. In the beginning, factories depended on only two or three sources for their raw resources, which carries a degree of risk. Purchasing raw material company stakes or engaging in advance agreements are two strategies being considered by manufacturers to mitigate risk.


November 2021: Raizen SA, a Brazilian energy business, and its shareholder Royal Dutch Shell Plc have agreed to supply second-generation, high-performance ethanol to the Ferrari Formula 1 team beginning next year, when the primary motor racing category will use a 10% ethanol blend in gasoline. Shell, which has a 70-year connection with Ferrari, believes that the usage of ethanol on the racetrack will encourage more people to use it as global initiatives like India's push forward their targets to increase ethanol percentages blended into gasoline. Ferrari's second-generation ethanol is generated from sugarcane bagasse, a waste that was previously discarded. According to Raizen, second-generation ethanol is already produced in a Raizen unit in the Sao Paulo state countryside, which increases ethanol yield by 50% without additional planted acreage. Because the other teams would most likely use first-generation ethanol in the first blend with 10% renewable fuel, the Raizen arrangement could provide Ferrari an advantage in the fuel blend.February 2020: Bharat Petroleum Corporation Limited has awarded TATA Projects, a company based in India, order for the company's second-generation bioethanol project in India's Odisha region. The plant's production capacity is 100,000 liters per day.June 2019: A global presence in the renewable fuels market has been enhanced by Attis Industries Inc.'s acquisition of Sunoco's 100 million gallons per year corn ethanol plant in Fulton, New York from June of this year.Compared to gasoline or diesel, sugarcane-derived ethanol has significantly lower direct emissions. The combustion of biomass to produce ethanol has been considered a suitable automobile fuel since automobiles were first invented, in particular for spark-ignition vehicles.

Over the forecast period of 2018-2023, how fast is the ethanol market predicted to grow?

Over the forecast period of 2022-2027, the global ethanol market will grow at a compound annual growth rate of 4.5%.

Who are the key players in ethanol market?

The ethanol market is expected to grow in which industries?

The ethanol market will benefit from its growth in food & beverage, automotive, personal care & cosmetics, chemicals, pharmaceuticals, and others.

What is the dominant market for ethanol in which region?

Ethanol is a market in North America that can remain dominant and keep its previous market position.

In the forecast period from 2022-2027, Asia Pacific will have the fastest CAGR

Considering the ethanol market's potential for growth, what could possibly slow it down?

The ethanol market is hampered by a lack of regulatory support and high transportation costs.