Bioactive Fillings Market Research Report By Material (Silicon Dioxide Based, Calcium Oxide Based, Phosphorus Pentoxide Based, and Sodium Oxide Based), By Application (Orthopedic, Dental, Tissue Engineering), and By End-User - Global Forecast till 2030 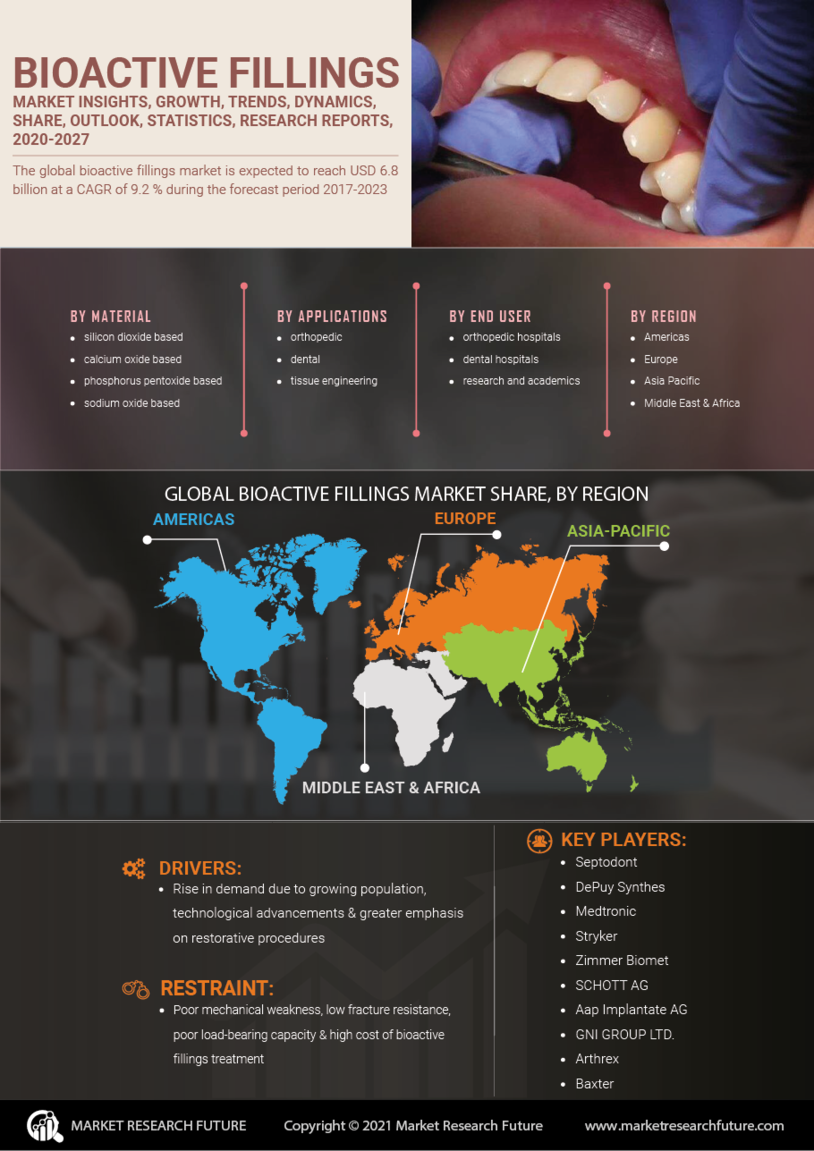 Segments The bioactive fillings market has been segmented on the basis of material, applications and end user.

Based on the applications, the Bioactive Fillings Market has been segmented as orthopedic, dental, tissue engineering and others.

Based on the end user, the market has been segmented as orthopedic hospitals, dental hospitals, research and academics and others.

Regional AnalysisThe Americas account for a significant market share owing to high expenditure on the health care especially of the U.S. and Canada. Additionally, the greater number of restorative procedures in the U.S. and Canada drives the bioactive fillings market. The high concentration of the major hospitals in the developed countries of this region coupled with good reimbursement rates is adding fuel to the market growth. Moreover, the large share of surgical restoration segment procedures in the returns of hospitals favors the market. The large number of medical devices companies in the U.S. is also a cause for the faster development of bioactive fillings market in the US.

Asia Pacific region is expected to grow rapidly. China and India are likely to lead this market due to fast growing healthcare sector and large unmet needs over the forecast period. The South East Asian countries such as China, India, and Malaysia are projected to contribute highly to the market growth. The growing penetration of healthcare industry in the Asia Pacific region is expected to drive the future bioactive fillings market in the region.

Gulf nations such as Saudi Arabia and the UAE are estimated to drive the Middle East & African market. Other Middle East nations to watch out for are Kuwait, Jordan, Egypt and Iran. The African region is expected to witness a poor growth owing to poor economic and political conditions, and poor healthcare development. Other regions are expected to be laggards due to poor social development and tribal identities such as sub Saharan Africa.

Growing Technological Advancements will Boost The Bioactive Fillings Market Growth at a CAGR of ~...