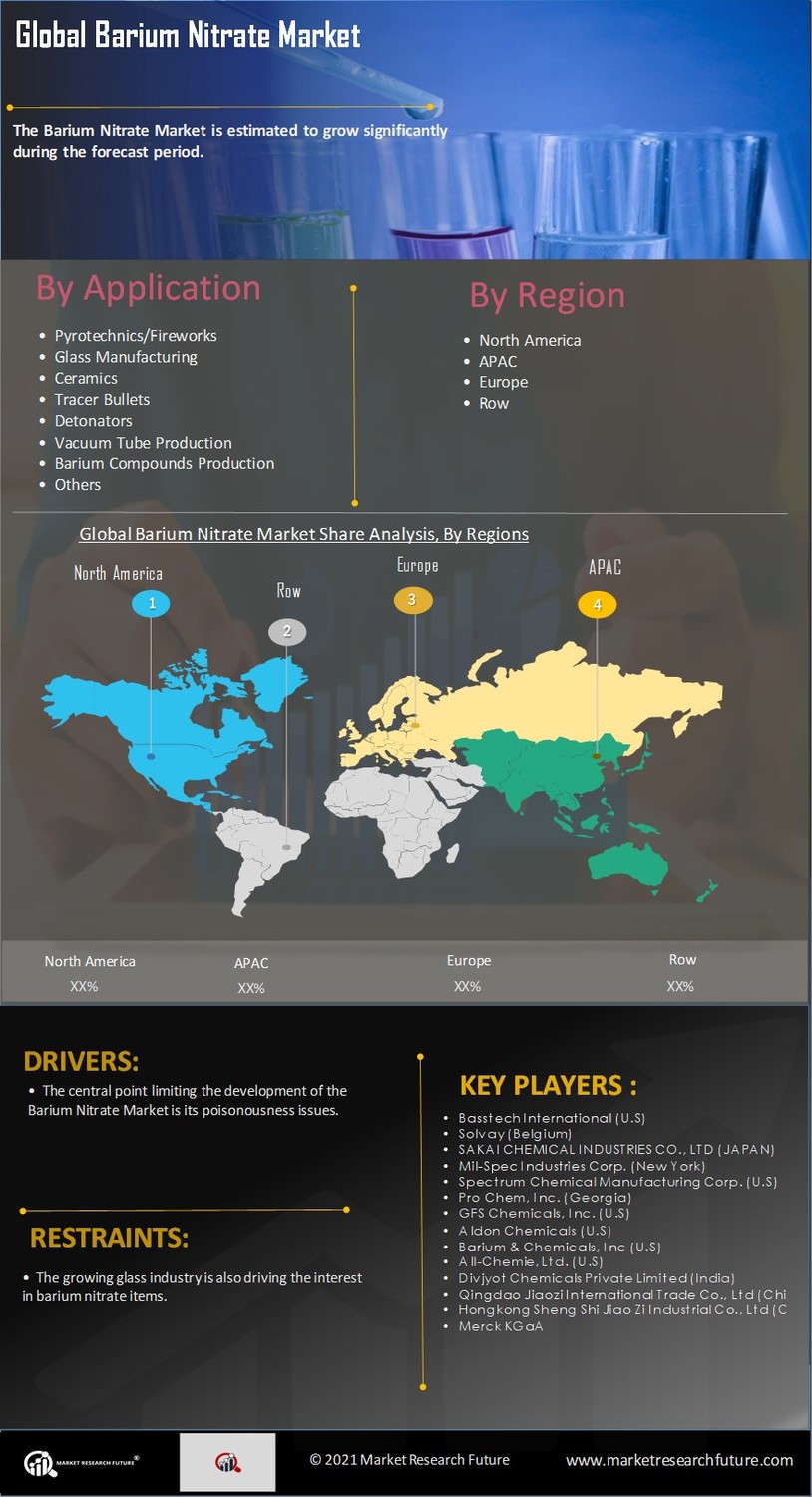 The barium nitrate market size is projected to reach approximately USD 3513.6 million by 2030, at a CAGR of 4.8% from 2022 to 2030. Barium sulfide reacts with hydrochloric and nitric acids to produce barium nitrate. Due to barium's quick precipitation kinetics and low solubility in alkaline conditions, barium nitrate is widely employed in pyrotechnics and the manufacture of explosives like Baratol. Barium nitrate is also used to make barium carbonate, which is then extensively used in the ceramics industry as a flux and a glaze component. Barium nitrate is frequently employed in the assembly of ceramic and clay powder, a fundamental component utilized in the manufacture of various electronic equipment, including capacitors, superconductors, and semiconductors. As a result, the barium nitrate market size is driven by demand from end-use industries like the electrical and electronics industry, the defense industry, and others. For instance, On October 2022, The 6000 crore Sivakasi fireworks sector, which has primarily focused on green crackers, is now planning to enter the firecracker market, which Chinese competitors have hitherto dominated.

The barium nitrate market growth significantly declined during the Covid-19 pandemic due to the numerous limitations implemented after the widespread outbreak. Due to the social segregation conventions established by many nations worldwide, commerce activity, human migration, and other resource movements were largely constrained. This constrained market mobility negatively impacted the production, sales, and distribution of barium nitrate.

The worldwide pyrotechnics and explosives industry is anticipated to experience robust growth due to the barium nitrate market forecast. In the upcoming years, the segment's expansion will be supported by the growing development in pyrotechnics, which drives up demand for colorful explosives at weddings, festivals, and other important occasions. Additionally, over the anticipated timeframe, the industry's growth is predicted to be fueled by the expanding need for pyrotechnics in the defense sector.


Since barium carbonate is primarily utilized in the production of ceramic powders and clay powder, which are then used in the production of ceramics and glass, there is a growing need for barium nitrate in the market. For instance, according to Ceramic World Web,  ceramics exports increased by 1.1% in 2019 compared to exports in 2018. Additionally, according to Glass Alliance Europe, glass production increased by 1.8% from the previous year to 37.2 million tonnes or 37.2 million metric tonnes. The worth of the entire glass and glass product manufacturing business in the U.S. was estimated by the Bureau of Economic Analysis to be US$3.83 trillion in 2020, an increase of 0.26% over the previous year's value. Barium carbonate is needed to make ceramic powders. Hence an increase in glass and ceramic production is driving demand for barium nitrate.


Barium nitrate has several negative consequences on both the environment and the human body, some of which have the potential to be lethal. The chemical compound barium nitrate is completely soluble in water. Fireworks and other pyrotechnics are the main environmental sources of barium nitrate. This further exposes barium nitrate to the local air and water bodies. Moving up the food chain can further get into human bodies. These harmful chemical substances can affect a person's health in many ways, resulting in deadly diseases. This is one of the main obstacles preventing the market for barium nitrate from expanding.

The barium nitrate market segmentation, based on purity, is <98%, 98% to 99.0% and >99%. The >99% segment had a major share in 2021. The purest form of barium nitrate, employed in several applications across numerous end-use sectors, has a purity level of at least 99%. Barium nitrate is used to produce special glasses and ceramics, explosives for the military, green fire in pyrotechnics, and other products with 99% and higher purity levels. Therefore, one of the important drivers driving the expansion of the >99% purity level segment in the barium nitrate market is the growth of such key end-use industries. Besides this, the 98% to 99.0% segment was the fastest-growing due to fireworks usage.

The barium nitrate market segmentation, based on application, is glass/ ceramics, fireworks, detonators, tracer bullets, vacuum tube production, explosives, primers, pyrotechnics and others. In 2021 the explosives segment had a major share in the market; the market was  driven by the rise in the production of explosives like baratol. Because barium nitrate has a high density and provides baratol its density of 2.5 g/cm3, it is favored for use in manufacturing this drug. Baratol is a detonator and explosive frequently utilized in the defense sector. The need for barium nitrate in the explosives business is rising due to demand from the defense and military industries. However, glass fabricating was the fastest growing due to the increased demand for ceramics.

The barium nitrate market report segmentation, based on end-user, is optical industry, defense and military, and chemicals. In 2021, the optical industry segment held a prominent market share. Optical glasses are widely employed in many applications, including precision lenses, viewing windows, pressure sensors, laser systems, instrument windows, beam displacement, and others. The features of the glass, such as chemical resistance, water resistance, humidity tolerant, different densities, and optical properties, such as high refraction index, light protection, heat transmission, and absorbance, can be ascribed to the increase in demand for optical glasses. Glass components, primarily utilized in the optical industry, are produced using barium nitrate. Compared to other types of optic materials, glass optics can withstand harsh circumstances for longer. These benefits and qualities drive the market for glass optics, which in turn drives the demand from the optical industry for barium nitrate. Besides, the defense and military fuel were the fastest growing due to the demand for explosives. 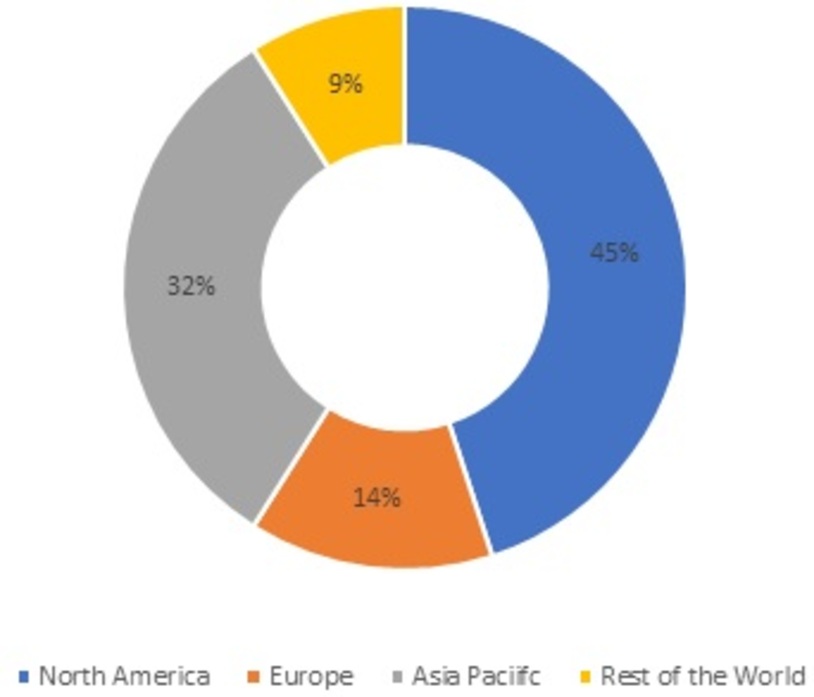 By Region, the barium nitrate market research report has been divided into North America, Europe, Asia-Pacific, and the Rest of the World. North America accounted for the most extensive market share. Europe is projected to exhibit the highest CAGR during the review period.

North America anticipated was most extensive barium nitrate market share in 2021. The demand for barium nitrate in the North American Region is being driven by the rise in demand from numerous end-use industries. In North America, consumer markets with high-tech scientific procedures and improved government projects relating to specialized industrial uses and defense systems are where optical technologies are trending more than anywhere else. Barium nitrate is used to make glasses and optical glasses. Therefore the growth in innovation and development in the optical industry is boosting demand for the commodity. For instance, a Mexican Photonics Cluster was established to support optics and photonics companies to assist Mexico in becoming the Latin American leader in the optics and photonics business. As a result, the demand for barium nitrate will continue to rise due to the Region's expansion in several optics-related industries during the forecast period.

Asia- Pacific was anticipated to encounter the fastest growth rate in 2021. Due to the increasing need for fireworks, pyrotechnics and electronics in this area dominate the barium nitrate industry. China is a large producer and exporter of fireworks, driving the market over the projection period. India is the fifth-largest spender on military expenditures worldwide, while China boosted its spending by 5.68%, according to the Stockholm International Peace Research Institute.

The market includes tier-1, tier-2, and local players. The level of competition in the barium nitrate market will increase from low to medium. There are currently fewer large firms active on the market than small players, which indicates that the market is extremely consolidated. Many rivalries are anticipated for new competitors in terms of matching the quality of the product, cost competitiveness, and supply reliability. For instance, in March 2019, BassTech extended its exclusive agent agreement with Chemische Fabrik Budenheim for North America. As the last phosphate producer concentrating on Specialty Metal Phosphates for technical applications, Budenheim has developed a wide variety of Phosphate Binders and Deflocculants for the Refractory Industry and Specialty Glass industries.

To identify and estimate the market size for the barium nitrate market segmented by purity, application and end-use industry by value (in U.S. dollars). Also, to understand the consumption/ demand created by consumers of Barium nitrate between 2020 and 2030

To identify and infer the drivers, restraints, opportunities, and challenges for the barium nitrate market

To provide a detailed insight into the major companies operating in the market. The profiling will include the financial health of the company's past 2-3 years with segmental and regional revenue breakup, product offering, recent developments, SWOT analysis, and key strategies.

What is the growth rate of the barium nitrate market?

The barium nitrate market is growing at a CAGR of 4.8% over the next 10 years.

Which region has the highest barium nitrate market growth rate?

Which region has the largest share in the barium nitrate market?

Who are the key players in the barium nitrate market?

Barium Nitrate Market is estimated to grow at a significant CAGR due to growing demand for Pyrote...