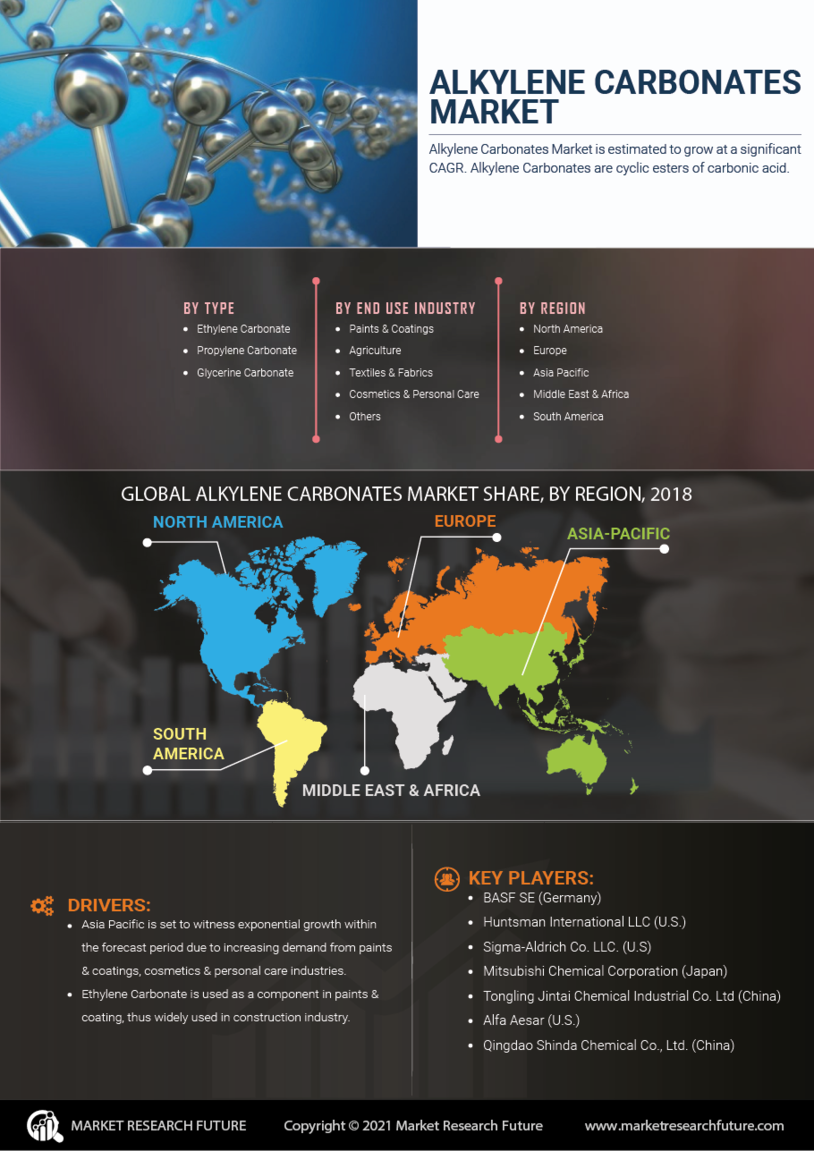 
On the basis of region, Alkylene Carbonates Market segmentation includes its current and estimated demand in Asia Pacific, Europe, Latin America, North America, and Middle East & Africa. Regionally, Asia Pacific is set to witness exponential growth within the forecast period due to increasing demand from paints & coatings, cosmetics & personal care industries. Ethylene Carbonate is used as a component in paints & coating, thus widely used in construction industry. Growth of Asia Pacific region is driven by the growth of construction industry. Also, usage of Alkylene Carbonate in lubricants and agrochemical-market>agrochemical has proven as a major driver for this market.

The prominent players operating in the Alkylene Carbonates Market include

Asia Pacific is expected to be the fastest growing region within the forecast period owing to the rising demand for cosmetic & personal care products among the increasing population. Growth of manufacturing bases for paints & coatings, textile & fabrics, and personal care is expected to drive the market growth. Growth is mainly observed in India and China due to the rising in industrialization coupled with high disposable income.

The share of Alkylene Carbonate is expected to grow owing to the stringent regulations imposed by various nations such as Europe and North America to prevent volatile organic compounds emission in the atmosphere. Increasing number of initiatives being taken up by environmental agencies specifically in U.S, France, and Germany on usage of environmental friendly solvents is driving its consumption in coating industry.

The report covers brief analysis of geographical regions such as North America, Europe, Asia Pacific, Latin America and Middle East & Africa. Recent DevelopmentJune 2021 - By mid-2023, Huntsman Corporation's Performance Products business plans to greatly expand its current capacity for ULTRAPURE Ethylene Carbonate at its Conroe, Texas facility. Huntsman has witnessed considerable growth in ULTRAPURE Ethylene Carbonate in recent years, which may be attributed to the evolution of electric vehicles and the localization of lithium-ion battery manufacture. Huntsman has launched a range of new high-purity Ethylene Carbonate grades for EV battery applications to address this rising demand. This capacity expansion will take advantage of our position as the only US producer of cyclic carbonates and assist the rapid growth of the lithium-ion battery markets for electric vehicles in the United States and Europe. Huntsman introduced new high-purity grades of ULTRAPURE Ethylene Carbonate as demand for EV applications grew in recent years.Study Objectives:

What are alkylene carbonates and their main applications?

What are the main types and major end-use industries of alkylene carbonates?

What are the major tailwinds pushing the growth of the global alkylene carbonates market?

Rise in the global economy that increases per capita disposable income.

Which region holds the largest share in the global alkylene carbonates market?

Who are the top players in the global alkylene carbonates market?