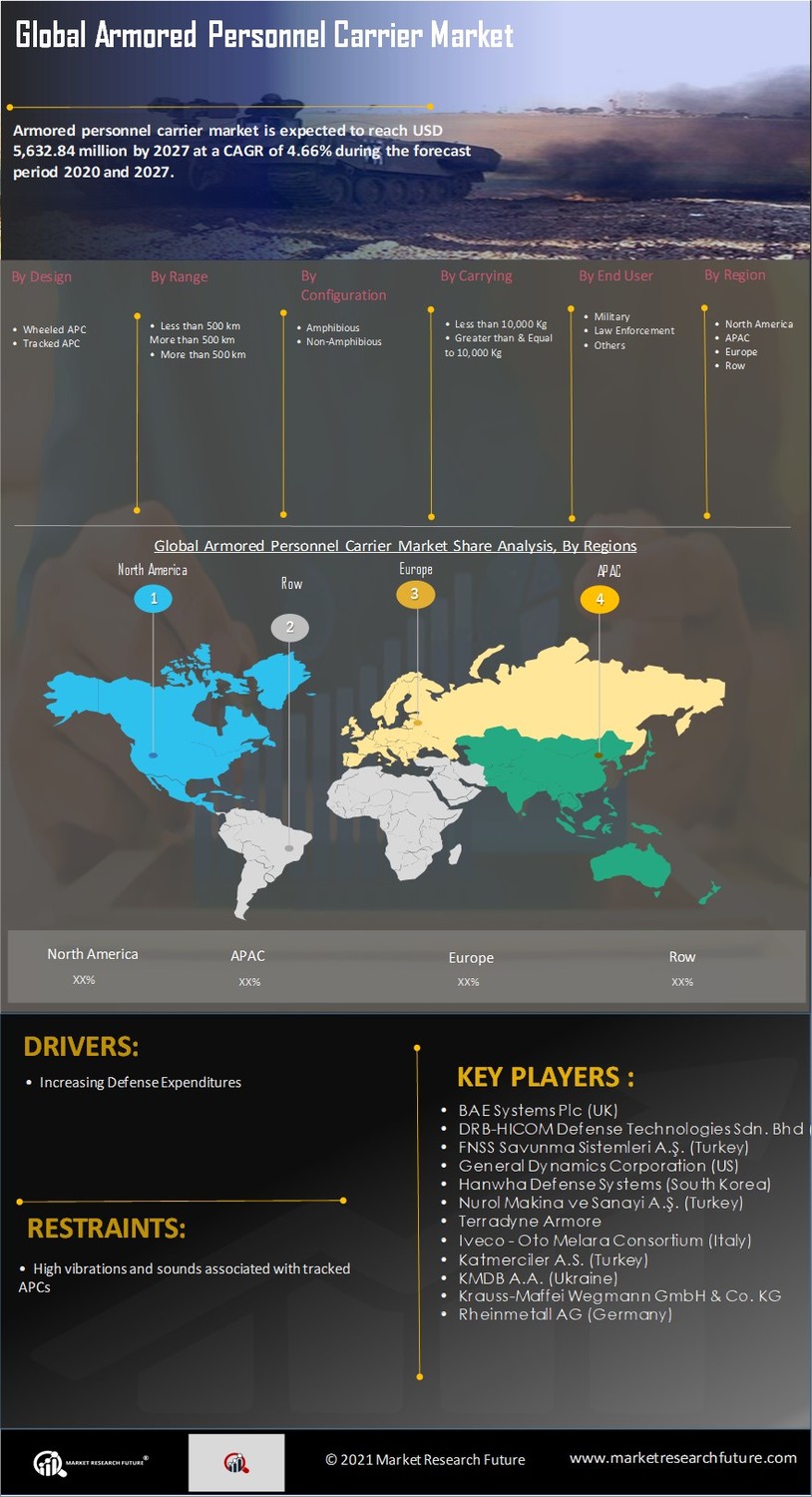 An armored personnel carrier (APC), also known as an armored combat vehicle, armored car, or infantry mobility vehicle, is an armored vehicle designed to carry troops and equipment into the battlefield. APCs weigh less than the infantry fighting vehicles and main battle tanks and hence are more mobile. Unlike the infantry fighting vehicles (IFV), APCs do not participate in the direct-fire battle and are primarily designed for transport. However, they are lightly armed for self-defense and are armored for protection against shrapnel, small arms, and artillery fire. Furthermore, certain types of APCs are used by non-military organizations as well.

According to MRFR, the current projections of global armored personnel carrier market growth till 2027 are expected to be lower than pre-COVID-19 estimates. This is because the pandemic has had a devastating negative impact on the defense industry across the world. In the defense industry, due to a decrease in tax revenues with a decrease in GDP, it is also expected to decrease the demand for new aircraft, naval vessels,ground vehicles, and related systems for defense applications in the next few years. This is also expected to decrease the demand for armored personnel carriers.

Many governments across the globe are focused on controlling COVID-19 outbreaks in their countries. Hence, they are investing more in healthcare equipment and the development of vaccines. Therefore, the defense expenditures on new systems are expected to be lower in the next few years. However, the defense expenditure is expected to increase gradually during the forecast period after the pandemic ends.

Thus, it is expected that the global armored personnel carrier market will grow at a slower rate in 2021 and 2022; from 2023, it will grow gradually.


Global defense spending reached USD 1.83 trillion in 2020, reflecting a 3.9% annual growth in real terms. Despite severe economic contractions caused by the novel coronavirus pandemic, the global defense spending as a proportion of GDP sharply increased from an average of 1.85% in 2019 to 2.08% in 2020. The defense expenditure by developed economies is under pressure, and the emerging economies, especially in the Middle East and Asia-Pacific, are gaining importance among defense equipment manufacturers. The increase in defense expenditure by countries in the Middle East and Asia-Pacific is driven by the constant need to monitor rising terrorist activities and unstable geopolitical situations. In 2019, US military spending accounted for USD 732.0 billion, accounting for 3.4% of the GDP, becoming the highest spender in the world.

As per a report by the Stockholm International Peace Research Institute (SIPRI), China’s military spending went up to USD 261 billion in 2019, an increase of 5.1% compared to 2018, while India’s defense spending has gone up to USD 71.1 billion, which is roughly 6.8% increase over the previous year. Other major military spenders in the Indo-Pacific include Japan at USD 47.6 billion and South Korea at USD 43.9 billion. There has been an increase in military spending in South East Asia as well, which recorded a 4.2% hike in 2019 to reach USD 40.5 billion. Thus, the increasing defense expenditure is expected to drive the growth of the global armored personnel carrier market during the forecast period.


Technology has been rapidly evolving. Artificial Intelligence (AI), geotargeting, automation, 3D printing, the Internet of Things (IoT), and other technological advancements set the stage for more technological evolutions. For instance, newer sensor technology is aligned with cameras and video surveillance for the vehicle, such as 360-degree field of vision cameras around the vehicle. These sensors increase situational awareness, and as each vehicle is outfitted with an array of sensors, a network is formed, equipping each unit with a better picture of the world around them. In 2015, Boeing filed a patent for a system to protect vehicles from blast damage by creating plasma fields. It is based on the idea of creating an ionized airfield that would deflect or absorb the energy from the incoming shockwave. This system is likely to be mounted on a military vehicle or some other target. This can further enhance the capabilities of APCs. Thus, incorporating technological advancements in APCs is expected to significant growth opportunities for the players operating in the global armored personnel carrier market.


The main design consideration for armored vehicles is usually to maximize lethality, survivability, and mobility. The performance of an armored platform can also be affected by vehicular vibration. Vibrations generated by armored vehicles during operations can affect human health and cause components to fail prematurely. Excessive vibrations in a vehicle are undesirable as they cause considerable crew discomfort and unwanted noise. Moreover, loud sounds also increase the risk of detection in enemy territory, limiting its usability for stealth operations. Thus, the high vibrations and sounds associated with tracked APCs are expected to restrict the growth of the global armored personnel carrier market during the forecast period.


The global armored personnel carrier market has been segmented, based on design, into wheeled APC and tracked APC. The wheeled APC segment dominated with a value of USD 3,103.29 million in 2019 and is expected to exhibit a CAGR of 4.31% during the forecast period.Wheeled APCs conventionally offer better fuel economy than tracked APCs owing to the reduced friction losses in comparison. This results in greater operating ranges for wheeled APC. Moreover, wheeled APCs are comparatively less expensive and require less maintenance and spare parts than the tracked APCs, making wheeled APCs more reliable than the latter.


The global armored personnel carrier market has been segmented, based on type, into amphibious and non-amphibious. The amphibious APCs are often equipped with propellers or water jets or be propelled by their tracks. Water traverse speed varies greatly between vehicles and is much less than ground speed.


Europe comprises the UK, Germany, France, and Italy. Europe spearheaded the armored personnel carrier market in 2019 with a CAGR value of 29.08% and is likely to continue to command during the assessment period. This is due to the recent increase in investments in land capabilities, the presence of key players, a rise of immediate security threats to the east and south of Europe, and involvement in conflicts in the Middle East. Europe has a presence of key APC manufacturers such as BAE Systems, Patria, Huta Stalowa Wola, Iveco, Romarm, Zetor Engineering, MSM Group, Yugoimport-SDPR, and more. Moreover, it is estimated that Europe has over twice the number of armored vehicle manufacturers compared to the US. The presence of this high number of APC manufacturers drives the growth of the armored personnel carrier market. Furthermore, several European countries own large fleets of older generation vehicles that will need upgrade or replacement. This is further anticipated to provide significant opportunities for the growth of the armored personnel carrier market.


Asia-Pacific held the second-largest position in the overall armored personnel carrier market with a share of 27.42% in 2019 and is anticipated to register the highest growth over the forecast period. Rising military spending in China and India and increasing political conflicts and security threats are driving the market growth in the region. Moreover, increasing indigenous R&D activities undertaken to develop advanced designs of armored vehicles for enhanced border and maritime patrolling and threats of cross-border terrorism are also driving the demand for armored personnel carriers. As per a report by the Stockholm International Peace Research Institute (SIPRI), China’s military spending went up to USD 261 billion in 2019, an increase of 5.1% compared to 2018, while India’s defense spending has gone up to USD 71.1 billion, which is roughly 6.8% increase over the previous year. Other major military spenders in the Indo-Pacific include Japan at USD 47.6 billion and South Korea at USD 43.9 billion. There has been an increase in military spending in South East Asia as well, which recorded a 4.2% hike in 2019 to reach USD 40.5 billion. Thus, with such a steady growth in military spending, growth in purchasing power, and rapid infrastructure development, the Asia-Pacific armored personnel carrier market is anticipated to register a significant CAGR during the forecast period.


The global armored personnel carrier market is expected to grow significantly in the coming years due to the growing demand for rapid air travel. The global armored personnel carrier market is characterized by the presence of several global and regional vendors. The market is highly competitive, with all the players trying to gain maximum market share. Frequent changes in government policies, intense competition, and aviation regulations are the key factors that impact the global market growth. The vendors compete based on cost, product quality, and reliability. It is crucial for the players to offer cost-efficient and high-quality armored personnel carriers to succeed in an intensely competitive market environment.

Other Key Players Operating in the Market

The scope of the report highlights drivers, opportunities, restraints, and challenges surrounding the global market. With easy-to-comprehend segmentation that includes design, range, carrying capacity, configuration, end user, and region, MRFR projections are based on historical and expected trends. In addition, major firms active in the global market have been profiled and paired with the top strategies employed by them to remain competitive in the industry.

Who Are The Top Key Players Armored Personnel Carrier Market

In Which Region Armored Personnel Carrier Market is Having Highest Share?