Armoured Personnel Carrier (APC) Market: Information by Type (Wheeled and Tracked), by Configuration (Amphibious and Non-Amphibious), by End-User (Military and Law Enforcement Others), and by Region — Global Forecast till 2027 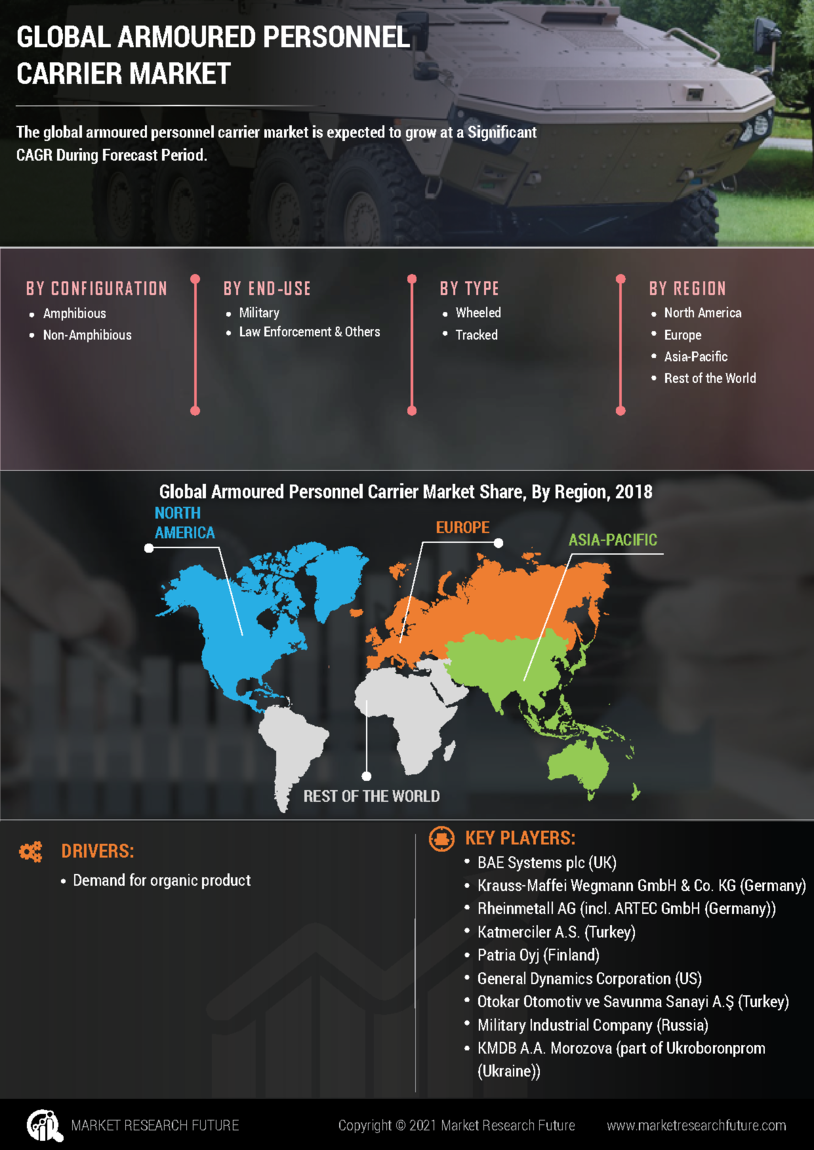 Armoured Personnel Carrier (APC) also termed as armoured combat vehicle, armoured car or infantry mobility vehicle is an armored vehicle designed to carry troops and equipment into the battlefield. APCs weighs less than the infantry fighting vehicles and main battle tanks, and hence are more mobile. Unlike the infantry fighting vehicles (IFV), APCs do not to take part in direct-fire battle and are primarily designed for transport. However, they are lightly armed for self-defence and are armored for protection against shrapnel, small arms and artillery fire. Furthermore, certain types of APCs are used by non-military organizations as well.

Factors such as focus on preventing riots in urban areas and rising incidences of asymmetric warfare are positively impacting the armoured personnel carrier market growth. In addition, the rise in defense expenditure, especially in emerging economies and subsequent investments in procuring armored vehicles to strengthen combat and tactical capabilities further boosts the market growth. However, factors such as delays in procurement processes hinders the market growth to a certain extent while enhancing protection, configuration, mobility and weaponry without significant increase in weight and cost of the APCs is a key challenge faced by the market players. Meanwhile, rising terrorist attacks and focus on counter operations, and aging combat vehicle upgradation programs being initiated by many countries throughout the world, create promising growth opportunities for the armoured personnel carrier market. Companies are also keen on developing an integrated solution covering multiple systems for maximum tactical and strategic mobility.

The global armoured personnel carrier market is estimated to register a CAGR of nearly 6% during the forecast period of 2018 to 2023.

Based on type, the tracked armoured personnel carrier segment accounted for the largest market share as it offers better mine resistance and higher mobility in rough terrains which is common in most battlefields. Based on configuration, the amphibious armoured personnel carrier segment is projected to witness the highest CAGR as these are ideal for ship to shore maneuvers. Based on end-user the military segment accounted for the largest market share as various countries are deploying these vehicles mainly for combat activities and national defense.

North America is estimated to account for the largest share during the review period. North America region in this report includes the US and Canada. Focus by the U.S. Department of Defense (DOD) on procuring armored vehicles, in the recent years, have resulted in the market witnessing a significant surge in demand, in this region. Moreover, the current military operations and exercises in the Middle East countries will also result in the US focusing on developing such vehicles, which will further deepen the scope of the market in the region.

The market numbers and forecast derived were the outcome of our disciplined research methodology which includes secondary research, primary interviews, followed by data triangulation and validation from our in-house data repository and statistical modeling tools.

In this process, both demand side and supply side parties were involved to extract genuine facts and insights about market forecast, production, trend, and projected market growth. Industry stakeholders such as CEOs, VPs, directors, and marketing executives across the value chain have been approached to obtain key information.

What is the calculated CAGR of the leading to the growth of the Armoured Personnel Carrier (APC) Market?

The CAGR of leading to the growth of the Armoured Personnel Carrier (APC) Market is calculated to be 4.66%.

What are the factors leading to the growth of the Armoured Personnel Carrier (APC) Market?

The focus on preventing riots in urban areas and rising incidences of asymmetric warfare are positively influencing the armoured personnel carrier market growth.

Name some of the top players contributing to the armoured personnel carrier market?

Which regions accounted for the highest shares in the armoured personnel carrier market?

North America is estimated to account for the largest share during the review period in the APC market.

What are the segments involved in the study of the global armoured personnel carrier market?

The segments such as type, configuration, and end-user are involved in the study of the personnel carrier market.