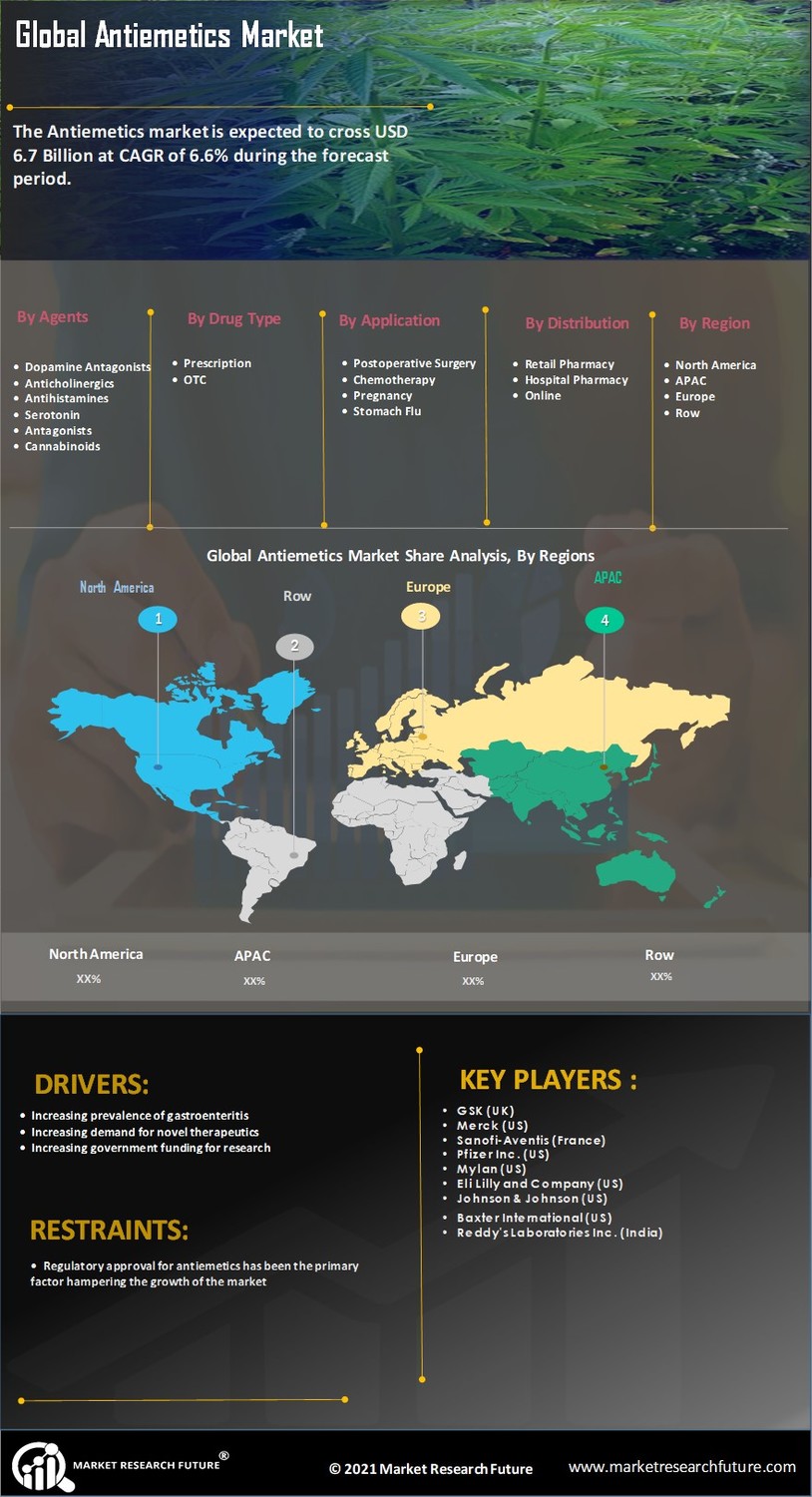 Antiemetics Market is expected to cross USD 6.7 Billion by 2025 at a CAGR of 6.6%. Antiemetics are agents that help to block specific neurotransmitters in the human body. Vomiting and nausea are commonly very stressful indications that have multiple triggers, including motion, vestibular disease, pregnancy, fear, drugs, migraine, and gastrointestinal pathology. One of the most common causes of patient dissatisfaction after anesthesia include postoperative nausea and vomiting (PONV). There are various antiemetics agents available for the treatment of nausea and vomiting, including; dopamine antagonists, anticholinergics, antihistamines, serotonin antagonists, and others. The key players manufacturing these products include GSK, Merck, and Pfizer Inc. As these players generate their maximum revenue from the Americas for the market, the region accounted for significant share across the globe.

The significant factors influencing the growth of the market include increasing research & development funding in the pharmaceutical industry, an increasing number of pregnancy-induced nausea, and acute gastroenteritis. Moreover, the rising demand for novel therapeutics and the growing prevalence of PONV is responsible for positive market growth.

How much is the global Antiemetics market worth in the future?

The valuation of the global Antiemetics market is estimated to reach USD 6.7 BN by 2025.

At what CAGR is the global Antiemetics market projected to grow in the forecast period (2019-2025)?

The global Antiemetics market is projected to grow at approximately 6.6% CAGR during the forecast period (2019-2025).

What are the major tailwinds pushing the growth of the global Antiemetics market?

North America holds the largest share in the global Antiemetics market, followed by Europe and the Asia Pacific, respectively.

Who are the top players in the global Antiemetics market?

Merck (US), GSK (UK), Sanofi-Aventis (France), Mylan (US), Pfizer Inc. (US), Eli Lilly and Company (US), Baxter International (US), Johnson & Johnson (US), Reddy's Laboratories Inc. (India), are some of the major players operating in the Antiemetics market.

Antiemetics Market: The Increasing Number of Postoperative Procedures is Projected to Boost Marke...