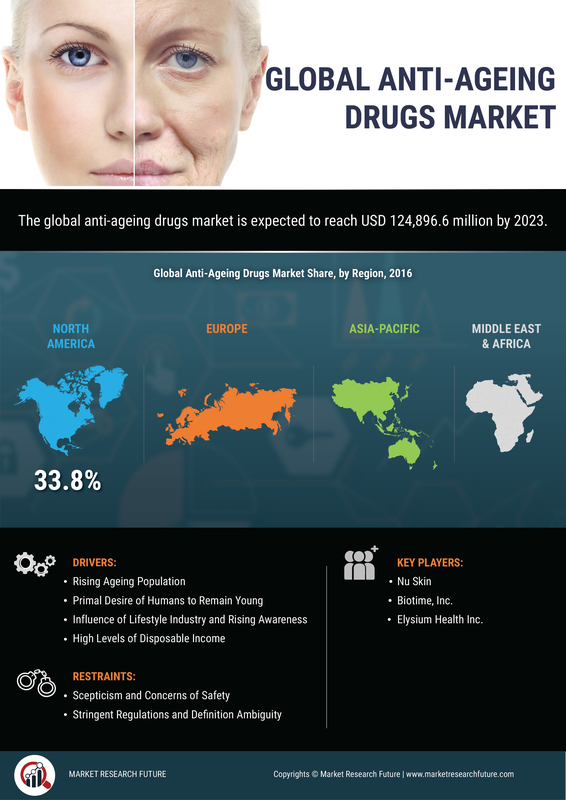 anti-ageing drugs come in many forms. One of these is anti-ageing pills. They promise to be to the 21st century what the ‘fountain of youth’ was to the 16th. Their goal is to help people live longer and healthier lives. This is accomplished by slowing down and even reversing the aging process.

COVID-19 disrupted all industries around the world when it first appeared on the global scene in March of 2020. Many nations responded to this damaging and potentially deadly virus by initiating temporary quarantines and indefinite lockdowns.

The anti-ageing drugs market was adversely affected. One of the keyways was in procurement of the materials necessary for research and development and for anti-ageing drug development. These raw materials became rare. Their prices also increased dramatically. This caused a slowdown in anti-ageing drugs sales because manufacturers were forced to pass the higher costs onto the end consumer in the form of higher retail prices.

The world is graying rapidly. China’s one child per family policy which has been instituted for almost four decades is a major contributing factor. So is the fact that almost all Western nations have large baby boom populations that were born immediately after World War II.

It is also a WHO estimate that there will be many more people aged 60 and above by 2050 than there are people aged 5 and younger. Four out of every five of these people are expected to be living in developing and third world nations.

The strong and rapid growth in the global elderly population is creating lots of opportunities in terms of anti-ageing drug development. More and more elderly people want to look and feel as young as possible. Much of this desire is driven by the media which never tires of presenting elderly celebrities in a new and younger light. Since these celebrities rely heavily on anti-aging drugs and anti-ageing pills, more and more elderly around the world want to use these drugs.

Many key people and players in society are sceptical about the claims of these anti-ageing drugs. They claim that these drugs are overhyped and may even be unsafe to use. Many people are also (rightly) concerned about the safety and long-term effects of using these drugs since many of these have not been approved by the Food and Drug Administration (FDA) or other national food and drug regulatory agencies either in America or other nations.

Since the anti-ageing drugs market is largely unregulated, anyone can come with drugs that claim to reverse the aging process and make fantastic claims and promises. In fact, the anti-ageing drugs market is indeed full of quacks and charlatans. Unfortunately, many of these people care little about the health and safety of the end customer. They also are pedaling drugs with unknown and potentially dangerous short and long-term side effects.

The recent and intensive investments in research and development by companies in the anti-ageing drugs industry is reaping huge dividends. These are in the form of a new generation of more powerful and effective anti-ageing drugs market. The market is lucrative since the end consumer is often willing and able to pay a premium price for these drugs.

BIOTIME Inc recently introduced its PEA supplement on the global anti-ageing drugs market. It adds to the PEA that the human body produces. The result is less of the pain and aches/suffering that older people tend to experience.

The anti-ageing drugs market is divided into many segments. These are serums and supplements, antioxidants and enzymes, and stem cells and (anti-aging) drugs.

The anti-ageing drugs market is divided to many segments in terms of application:

According to many anti-ageing drugs market reports the North American region commands the greatest anti-ageing drugs market size. America commands the lion’s share of this market size. There are many reasons for this. They are the fact that gross and per-capita incomes are the highest in America. The fact that America has a large and rapidly increasing elderly population is another key factor. This elderly population is also among the wealthiest demographic segment in America. This is another key factor.

The European union has the second largest anti-ageing drugs market size. This is largely because almost all European nations have nationalized and/or socialized universal health care. The governments can therefore afford to spend lavishly on the research and development that companies in the anti-ageing drug industry need to thrive. Another key contributing factor is the fact that European media promotes the importance of youthfulness. It also emphasizes anti-ageing drugs and their many benefits.

The Asia-Pacific region is expected to experience the largest growth in the anti-ageing drugs market. At present, this is largely because Japan has a large elderly population. This is expected to grow dramatically in the next few years. The Japanese elderly also have relatively high discretionary incomes and purchasing power.

Demand for anti-ageing drugs is expected to grow rapidly in China in the next few years. Demographics and the one-child-per-family policy are the key culprits. Disposable income for the elderly is rising fast in China, but not as fast as it is in developed nations.

India is expected to see an increase in demand for these drugs after 10-15 years. The reason why is because birth rates are dropping dramatically in this nation. Disposable income and purchasing power are also rising rapidly in India. In fact, the CAGR for anti-aging drugs in this region is expected to be 15.3% until the end of 2023.

The Middle East North Africa (MENA) and the rest of the world region is expected to see limited growth. The main constraining factors are abject poverty, corruption, low economic growth, unstable political conditions, and bad healthcare that is not subjected to regular infusions of money.

The anti-ageing drugs market is very competitive. Though there are significant barriers to entry, many large companies already call this market home. This will help them produce newer drugs that are more effective and more expensive. They are also engaging in joint-ventures and mergers and acquisitions. This will help them enter new markets with ease!

BIOTIME Inc is a major player in the anti-ageing drugs industry. It is surviving by constantly introducing new products to the market. These have high price points.

The anti-ageing drugs market is experiencing a strong CAGR of over 7.10% a year. This is expected to continue at least until the end of 2030. Many companies are investing heavily in research and development to try to bring a new generation of potent and pricier anti-aging drugs to market.