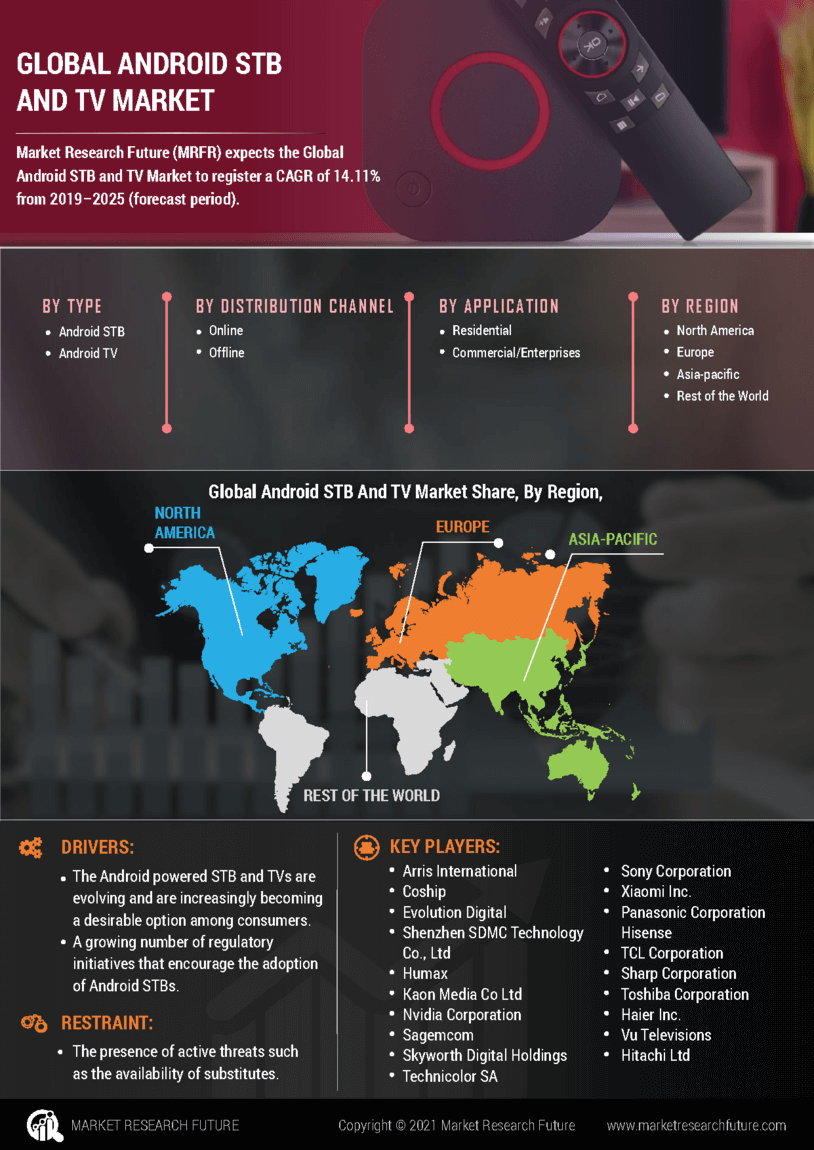 Market Research Future (MRFR) predicts that the Android STB and TV Market size will grow at a compound annual growth rate (CAGR) of 13.97 percent from 2019 to 2025. (forecast period). Essentially, an Android STB is a device that allows a television set to function as a user interface for content that is delivered via the Internet, satellites, or television channel. A TV set that is equipped with an Android STB is also capable of receiving and decoding digital television (DTV) broadcasts. The STB comes with an Android version pre-installed, which gives you the flexibility to convert your regular TV into a smart TV. In addition to the increasing accessibility of Android and Smart TVs, the prevalence of HD channels, and the growing demands for over-the-top (OTT) services, there are a number of other factors that may contribute to the increased adoption of Android STBs.

Demand is being driven by the increasing integration of STBs with Android TVs, as well as the expansion of collaborations between cable companies, wireless carriers, and TV makers in order to reduce the overall running costs of individual services. Due to the obvious advances in modern media and the availability of internet-based tv networks, the home sector is the primary source of revenue for Android STBs and TVs. The worldwide Android STB and TV market is expanding at a fast pace, owing mostly to the rapid growth for over-the-top (OTT) services as well as locally produced and delivered content. Furthermore, a large number of Android STBs and TVs providers working to give their customers a complete experience of over-the-top (OTT) apps like as Netflix, Amazon, and YouTube, as well as locally produced and redistributed content, contributes to the market's growth. In light of the increasing number of people using Android STB and TV to access the newest video entertainment material or gaming apps, the industry is expected to gain considerable momentum in the coming years.

As a direct consequence of lockdowns imposed in many nations across the world to limit the occurrence of the deadly coronavirus, media demand is projected to see a substantial increase. Because consumers are being forced to stay at home, they are turning to popular over-the-top (OTT) service providers such as Netflix, Amazon Prime, and others, as well as renewing or upgrading their current pay-TV packages, purchasing IPTV subscriptions, and other means of meeting their desired needs. Online video streaming providers have benefited as a result of this, and Android set-top box makers have taken advantage of the situation.


It is becoming more popular among customers to have an Android-powered STB or TV because of the features it provides, such as a rich and robust user experience, access to a larger variety of applications, and the overall market expansion it will bring with it. These gadgets provide customers with a variety of connection choices, including USB ports, Bluetooth, WI-FI, HDMI outputs, and Ethernet connectors, among others.


Increased viewer number of high definition channels, along with an increase in the number of smartphones and other similar devices, will result in an increase in the value of the android set-top box (STB) and television (TV) markets in the future. In addition to creating profitable growth opportunities for the market in the short term, rising regulatory efforts to boost the market for android TV devices and television (TV) will also generate significant growth opportunities in the long term. In addition, rising viewer desire for hybrid content will spur expansion in the android set-top box (STB) and television (TV) market demand, which will benefit both companies.


The major market constraint for the android set-top box (STB) and television (TV) markets would be the high cost of labor in the industry.


Customers' confusion, anxiety, and skepticism about the product, on the other hand, will represent a significant challenge to the development of the android set-top box (STB) and television (TV) markets in the future.

In terms of production, Asia Pacific led the market in 2018, due to the increasing use of the internet and smart TV. The growing demand for internet data in emerging nations, such as India, as a result of content digitalization, is expected to promote regional development. Over the projection period, North America is expected to grow at a volume-based compound annual growth rate (CAGR) of more than 22.0 percent. One explanation is the accessibility of Ultra High Definition (UHD) material as well as Ultra High Def devices. The Android STB and TV Market in this area will be driven by a shift in customer preference for over-the-top (OTT) video delivery services such as Netflix and HBO.

Based on the application, the market is segmented into residential and commercial/enterprise.

Based on the propulsion types, the market is segmented offline and online.

According to the reports, the global android STB and TV market are divided into North America, Asia Pacific, Europe, and the rest of the world. It is anticipated that the North American Android STBs and TVs market share would expand at a significant rate during the forecasted timeframe. In addition to the increasing popularity of Ultra-High Definition (UHD) devices, the expansion of UHD content, and boosting customer preferences for information searches through premium service OTT platforms, such as Netflix and HBO Now, are some of the major factors determining the growth of the regional market. The United States is expected to dominate the North American area as a result of the growing interest in over-the-top (OTT) and IPTV platforms, particularly among younger populations. Media consumption in the United States has also increased significantly, accompanied by a move away from conventional forms and toward new-age digital media.

The worldwide android STB and TV industry are very competitive, with a large number of suppliers competing to provide their consumers with feature-rich and innovative products. In order to strengthen their position and succeed in the Android STB and TV market, industry players are using a variety of organic and inorganic development methods, such as product improvement, public offering, alliance, partnership, and cooperation, among others.

At what CAGR is the global Android STB and TV market projected to grow in the forecast period (2019 -2025)?

Global Android STB and TV market is projected to grow at approximately 13.97% CAGR during the assessment period (2019 -2025).

What was the value of the global Android STB and TV market in 2018?

Which region holds the largest share in the global Android STB and TV market?

North America holds the largest share in the global Android STB and TV market, followed by the Asia Pacific region and Europe, respectively.

Who are the top players in the global Android STB and TV market?

What are the key growth strategies of Android STB and TV industry players?

Strategic initiatives such as mergers & acquisitions, collaborations, expansion, and technology/ product launch are some of the growth strategies that players operating in the global Android STB and TV market adopt to gain a larger competitive advantage.

Android STB and TV Market is Estimated to Record a CAGR of 14.11% over the Forecast Period