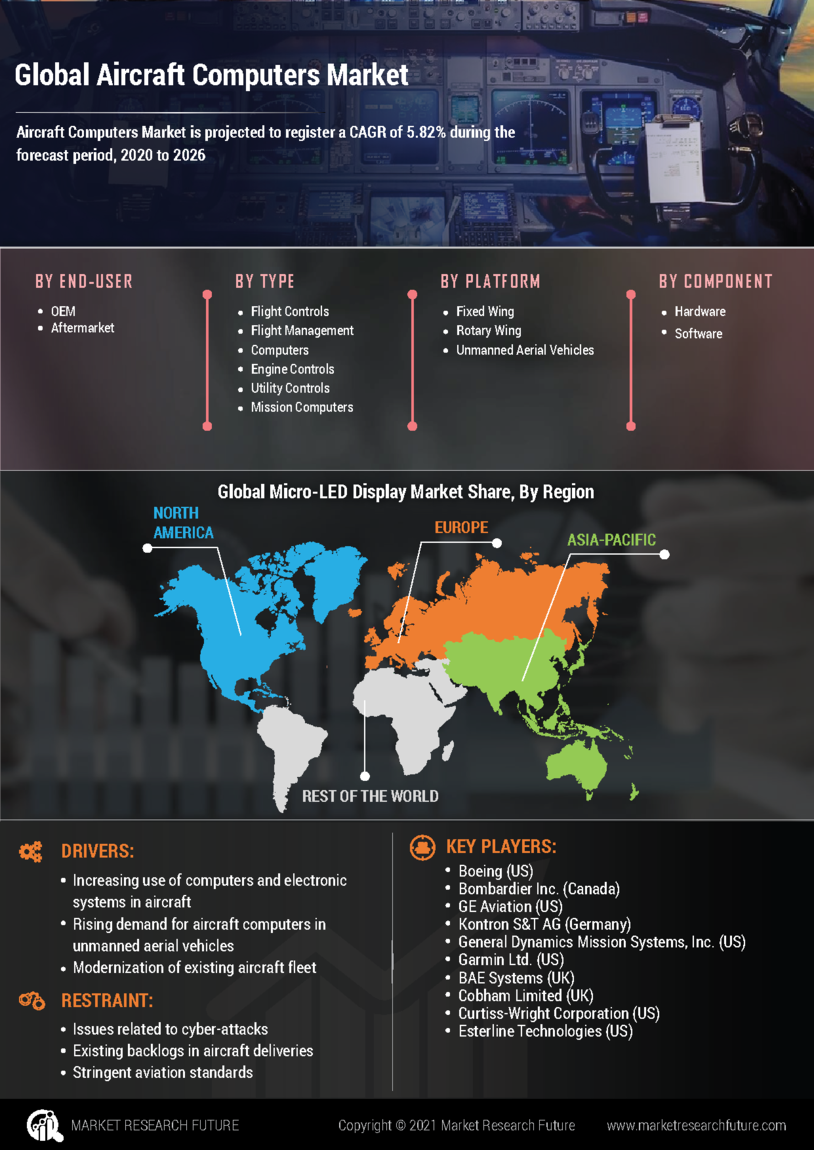 Aircraft Computers Market is projected to USD 8.7 Billion register at a CAGR of 6.7% during the forecast 2022 to 2030

As the aircraft computers are performing major functions, they are considered as the neutral and center of the aircraft. These computers are responsible for key operations such as take-off, cruise, descent, and significant others. The efficient flight management systems make the pilot the aviation driver comfortable and enhance the flight experience. Therefore the key market players are investing in the growth of the industry and the development of these components such as aircraft actuators, cockpit controls, flight control computers, and trim actuators are bolstering the overall growth of the aircraft computers industry.

The aircraft computers market ecosystem has been changing in recent years during the varying requirement and the growing development in the industry. However, the pandemic has reduced the demand for the aircraft industry. The reduction in the production units and the designing teams has significantly impacted the market growth in recent times.

The key manufacturers are inclined towards advancing and modernizing the aircraft fleets and the end-users are quite aware of the key operations that are performed by the aircraft computers such as designing airplanes, controlling the in-flight operations, ensuring safety, and significant others. Such factors are expected to bolster the overall growth of the industry during the forecast period.

The increasing number of cyber-attacks and the stringent regulations imposed by the government authorities to enhance the safety of the passengers required higher quality products and thereby considered as the major restraint of aircraft computers market growth.

The malfunctioning of the software solutions during the flight and the efficient control of the engine and the utilities are considered as the major challenge for the overall growth of the aircraft computers industry. The rising demand to increase the safety of the passengers and to reduce the workload for the pilot is considered a major challenge for the manufacturers.

The market value of the aircraft computers industry was at USD 5470.7 million in the year 2020 and is expected to surpass the market value of USD 7106.9 million by the year 2027 while registering a CAGR of 3.4% during the forecast period. The growth of the aircraft computers industry is influenced by the growing demand for mission computers across the globe. Since these mission computers are capable of carrying out advanced technologies such as general-purpose I/O, video, and voice processing operations efficiently, they are increasingly adopted across the industry. Similarly, the increasing usage of helicopters, especially for the civil and military services and other medical emergency services during natural disasters and other situations are propelling the demand for rotator wings and thereby propelling the overall growth of the industry in recent times.

The demand for the military and commercial services are increasingly adopting the unmanned aerial vehicles and thereby showcases higher demand to avoid the unmanned aerial traffic and also requires enhancement in the navigation capabilities. Such factors are propelling the overall growth of the aircraft computers industry in recent times.

The aircraft computers market growth is highly influenced by the increasing utilization of computers in the aerospace industry and the growing demand for electronic systems and modernization of aircraft fleets. The leading market players are bringing in new developments in the industry as well. For instance, one of the leading market players, Honeywell had introduced a new compact system that is utilized in urban air vehicles which is named “fly-by-wire” which ensures possible failures that control the failures and recovers the aircraft seamlessly. The demand for stabilized flying is higher across the industry and this invention has offered the capacity, especially for unmanned vehicles.

The commercial front report had stated that China is expected to hold the largest aviation market by 2025 and India is expected to grow as the world’s third-largest aviation market and other countries in the Asia-pacific region are expected to hold the top 10 positions in the aviation market. Such reports are expected to drive the aircraft computers market growth during the forecast period. Also, the favorable economic condition across Asia-pacific has helped the region in attaining ever-growing passenger traffic. Even in the year 2019, the region has reached and acquired about 411 narrow-bodied aircraft and 160 wide-bodied aircraft with various OEMs.

The developed countries like China and India are procuring new aircraft to enhance their military prowess and to immediately respond to their security threats and carry out critical and dangerous strategic missions across the country. Therefore the countries are procuring modern fighter aircraft and the ones that possess advanced autopilot systems and flight computers that offer excellent situational awareness to the pilots.

In the year 2021, one of the leading market players, Garmin Ltd had announced that their product GFC 500 had received certification from the federal aviation administration, and hence it can be used in various aircrafts such as Beechcraft 19 sport, Beechcraft 23 musketeer, or sundowner, Beechcraft 24 musketeer and sierra aircraft models as well.

In the year 2022, one of the leading market players, Microsoft Flight simulator piper had announced tomahawk which features 4096 X 4096 PBR materials which also includes passenger doors and cockpit windows, sun visors, and significant other facilities. Tablet EFB is used to control various aircraft options and adjust the options such as cold and dark, Ready for takeoff, ready for the start.

What CAGR is the Aircraft Computers Market expected to record in the years to come?

Aircraft Computers Market is expected to record a CAGR of 6.7% in the years to come.

What are the factors backing the Aircraft Computers Market growth worldwide?

What factors can deter the Aircraft Computers Market growth during the evaluation period?

Surge in cyber-attacks and strict aviation regulations can deter the Aircraft Computers Market growth during the evaluation period.

Which end-user is the leading segment in the Aircraft Computers Market?

Which type-based segment can note the fastest growth rate?

Flight controls is the type-based segment that can note the fastest growth rate.

Aircraft Computers Market Size Expected to Grow at a CAGR over 8.7% By 2030