Please note that the assessment period of the report has been updated from 2018-2023 to 2020-2027. Cordially fill Sample form for the updated data . 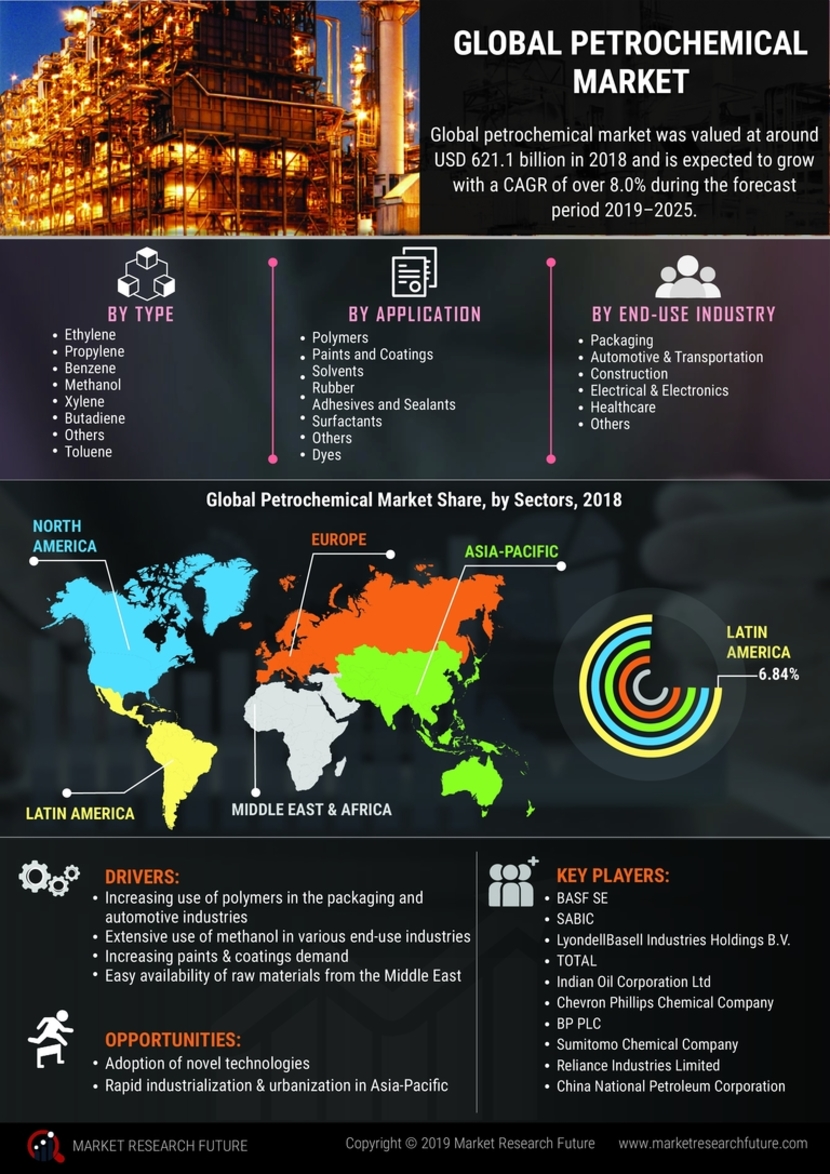 According to MRFR, the Global Petrochemicals Market is poised to mature at a CAGR of 8.06% to reach around USD 943.5 Billion by the end of 2023. The petrochemical market's growth will be driven by the demand from the end-use industries for downstream products and by capacity additions in the base chemical industry.

The pandemic of the coronavirus coincided with an industry already experiencing a downcycle. COVID-19 is pushing petrochemical administrators to reconsider the industry's prospects. Before the pandemic, declining growth in demand, increasing surpluses, and a diminishing value pool were still present and have only been more pronounced. In addition, from the transition to green energy supplies and a regenerative, or circular, economy, the sector experiences systemic change. In order to concentrate on growth scenarios, regionalized supply chains, and resource production productivity, chemical sector leaders and financial participants would need to update their viewpoints and management agendas.

The development of the petrochemical market would be powered by the growth from the end-use sectors for downstream products and capacity adds in the base chemical sector. It is expected that the production of emerging technology focused on feedstocks such as light crude and mixed crude would have a beneficial effect on supply. Developing such technology would allow businesses to process chemicals on a refinery scale. Stabilization observed in raw material prices is a significant factor impacting operational costs. Operating margins is impacted by the high expense of research and development involved with a downstream product along with regulatory clearances.

Adoption of Petrochemicals in Numerous End-Use Industries Boosts the Market

The expansion of the petrochemical industry will be led by the growth of downstream goods from the end-use industries, and by the addition of capacity in the base chemical field. The petrochemicals industry has seen exponential growth over the past few decades due to growing demand from a number of end-use industries, including aviation, building & construction, agriculture, food & beverage, electrical & electronics, healthcare, and automotive.

However with rising worries about the use of plastic and its effect on the environment, demand for plastic goods has gradually decreased in many key industrial sectors. It is expected that the growing likelihood of an economic recession in 2020 would have a profound effect on petrochemical development. Initially, the slowdown in demand could lead to reduced utilisation of resources. In the second half of the forecast period, the growth of the global petrochemical industry is therefore expected to slow down.

Global Petrochemicals Market has been segmented by Application, Type, End-Use Industry, and Region.

Global Petrochemicals Market, By Type, is segmented into Ethylene, Propylene, Butadiene, Benzene, Toluene, Xylene, Methanol, and Others. The ethylene segment accounted for the largest market share of around 26 percent in 2017, based on type, and during the forecast period it is expected to record a remarkable CAGR.

Global Petrochemicals Market, By Application, is segmented into Polymers, Paints and Coatings, Solvents, Rubber, Adhesives and Sealants, Surfactants, Dyes, and Others. The polymers segment had the largest market share by application in 2017 and is predicted to exhibit a CAGR of more than 8 percent over the forecast period.

Global Petrochemicals Market, By End-Use Industry, is segmented into Packaging, Automotive & Transportation, Construction, Electrical & Electronics, Healthcare, and Others. The packaging segment accounted for the largest share of 32 percent in 2017, based on the end-use market, owing to the growing use of petrochemicals in the packaging industry worldwide.

The global market's geographical overview has been conducted in four major regions, including the Asia Pacific, North America, Europe, and the rest of the world.

Based on the rapid industrialization in the region, Asia-Pacific had the biggest market share of about 51.5 percent in 2017. During the forecast era, the regional demand is predicted to register a substantial CAGR. The main growth-centric countries in the regional market are projected to be China and India. The region has emerged as the biggest export hub for petroleum products over the past few years, and this development is projected to continue in the immediate future. Huge innovations in the transport and energy sectors in the area are projected to fuel demand for the petrochemical industry in the region as a result of growing trading activities, along with the use of technical advances by customers.

One of the important markets for petrochemicals is North America. In North America, the boom in the extraction of shale gas from the wells has triggered low cost ethane gas production, while reducing the production cost of ethylene to 60 percent compared to Petrochemical as a feedstock is one of the reasons that can limit the global demand for petrochemical products. During the prediction, the US petrochemical market is projected to demonstrate a remarkable CAGR of over 7 percent. Because of the decline in raw material costs, the shale gas revolution in North America has turned industry players in the country from high-cost petrochemical and resin suppliers to the lowest-cost. The steady growth in the demand from construction and automotive industries coupled with significant capacity expansions is expected to drive the growth of the market for petrochemicals.

The petrochemical industry in Europe is distinguished by the presence of major players in the industry, such as INEOS, Shell Chemicals and BASF. Due to market saturation, Western Europe is projected to see sluggish growth. Leading to market swings, the European petrochemical industry is likely to experience more outages at crackers and polymer plants over the coming years. Increased production of ethylene in large countries such as Germany, France, and the U.K. The growth of the demand for petrochemicals is expected to improve.

It is expected that the Middle East economy will be powered by plentiful natural gas and crude oil supply. In petrochemicals, the area is growing its power, particularly in ethylene and its derivatives, such as polyethylene (PE) and ethylene glycol. The increasing popularity of naphtha feedstocks and the political uncertainty are the main risk factors faced by producers.

In order to boost their market share and become leaders in the global market, key players in the global petrochemicals market focus on growth strategies such as expansion, joint ventures, acquisitions, new product launches and technology transfer on a global level. To boost their market position, petrochemical firms are looking at acquisitions and mergers, and joint partnerships with other major players. Businesses are seeking to reach the maximum potential customer at optimal costs through these operational integrations.

December 2020: In a statement in line with Moscow's plans to forge stronger relations with Beijing, the Russian government approved the involvement of China's Sinopec group in a large-scale petrochemical project, the government said.

July 2020: Advanced Petrochemical of Saudi Arabia released a statement regarding their launch of the construction of a new propane dehydrogenation (PDH) unit and a polypropylene (PP) plant in Al Jubail.

MRFR’s report about the global petrochemical market provides detailed supply, demand and price forecasts of the key petrochemical feedstock naphtha along with an overview of the petrochemicals market including data regarding several segments and regions of the market. The report also provides analysis on arbitrage economics, cracking economics, refinery and petrochemical facility turnarounds and their impacts on regional balance.