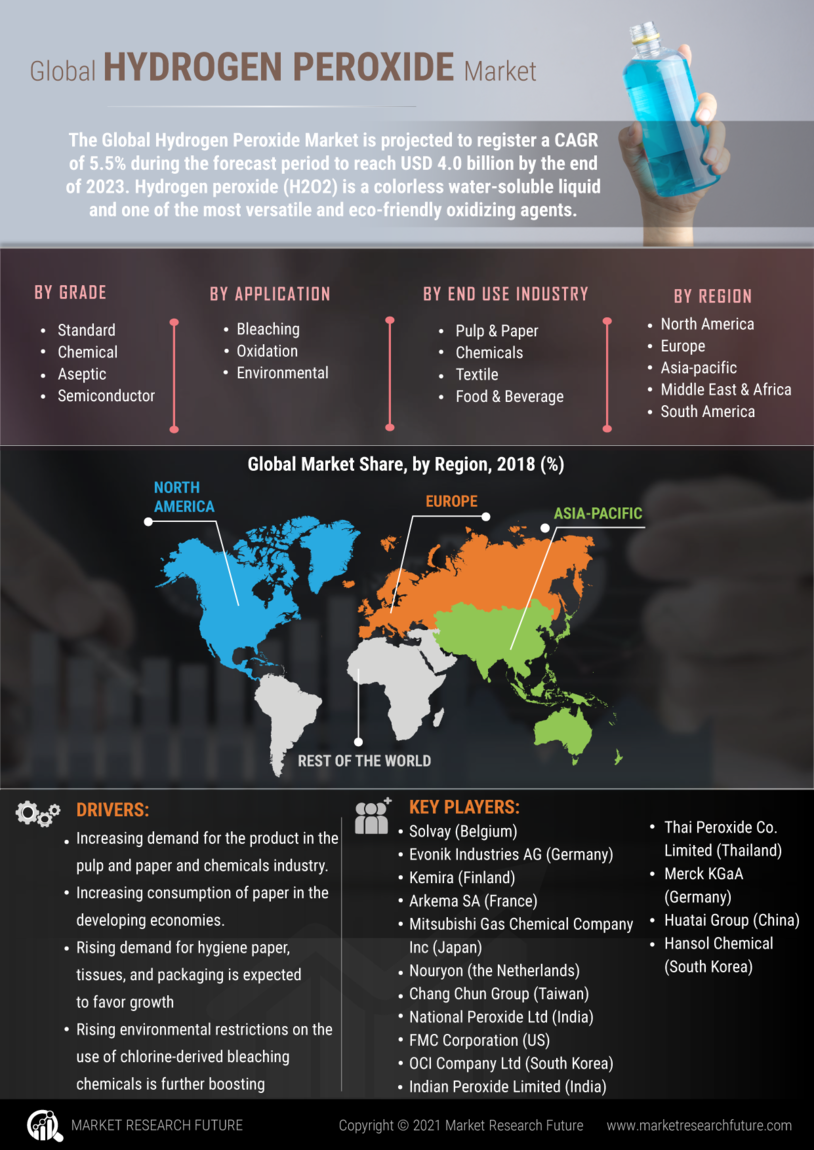 Due to the strict lockdown requirements, the pandemic period was a difficult time for the hydrogen peroxide market growth. When the supply of raw materials was interrupted for an extended period due to travel restrictions, the market was put under pressure. Manufacturing and other industrial units suspended operations until the lockdown period was lifted, affecting production rates and resulting in a decline in the growth statistics. Customers were unable to get the products on time, thus affecting the supply chain process further.

Having recognised the pandemic's loss, the key players are attempting to make up for it by implementing new tactics and plans and tackling the challenges. To keep the market's growth stable, future product development and enhancements are made. Furthermore, the market is expected to grow at a rate of 4.3% in the forecast period.

Cumulative Evaluation of the Market

The market overview is provided by the analysed summary of the Hydrogen Peroxide Market Analysis. The market is expanding due to growth drivers and increased market demand as a result of many developments and innovations of key market players. Existing elements, such as drivers and opportunities, are assisting in the market's valuation. Other variables such as restraining and challenging factors, which are based on negative elements, hinder its progress. The key players pay close attention to these challenges and restraints in order to ensure that the market reaches its expected value rapidly as feasible. As a result, the market is expected to achieve its CAGR to be 4.3% during the forecast period.

The hydrogen peroxide market is segmented into three major segments that are by grade, by application, by industry. Further, these segments are again sub-segmented into different segments:


By GradeThe Grade segment is segregated into standard, chemical, cosmetic, aseptic, food, semiconductor sub-segments.By ApplicationHydrogen Peroxide has extensive application in various industries. According to this  application market segment is classified into bleaching, environmental, packaging, oxidation, packaging, disinfectant, propellant, and others.By IndustryBased on industry, the global hydrogen peroxide market can be divided into different categories that entails pulp and paper, chemical, food and beverage, textiles, personal care and cosmetics, electronics, healthcare, mining, and others. According to the preview period market study, pulp and paper industry is dominating the hydrogen peroxide market.

Competitive Intensity Within The Industry

The studied report on the Hydrogen Peroxide Market Forecast discusses the market's expansion throughout the preview period on the basis of demand. The report covered both the loss and recovery from the Covid-19  pandemic. The market's dynamic components and their impacts were briefly outlined. The principal segments and their sub-segments are shown in the segmentation analysis. The regional analysis provides a comprehensive overview of the Hydrogen Peroxide Market's geographical areas. The market is being driven at a global level by the critical role of the major key players and their innovations. The market's demand is being fueled by recent developments. As a result, all of the positive variables will contribute to the market achieving a high compound annual growth rate over the study period.

At what CAGR is the hydrogen peroxide market projected to grow during the forecast period?

What will be the value of the hydrogen peroxide market during the forecast period?

Which region is expected to lead the hydrogen peroxide market?

Asia Pacific is expected to lead the hydrogen peroxide market.

Who are the key players in hydrogen peroxide market?

What are the major key market driving factors of hydrogen peroxide market?

Due to the extensive use of chemicals, papers and pulp industry, it is boosting the market growth.

What are the major applications of hydrogen peroxide?

The major applications of hydrogen peroxide includes environmental use, oxidation, and bleaching.