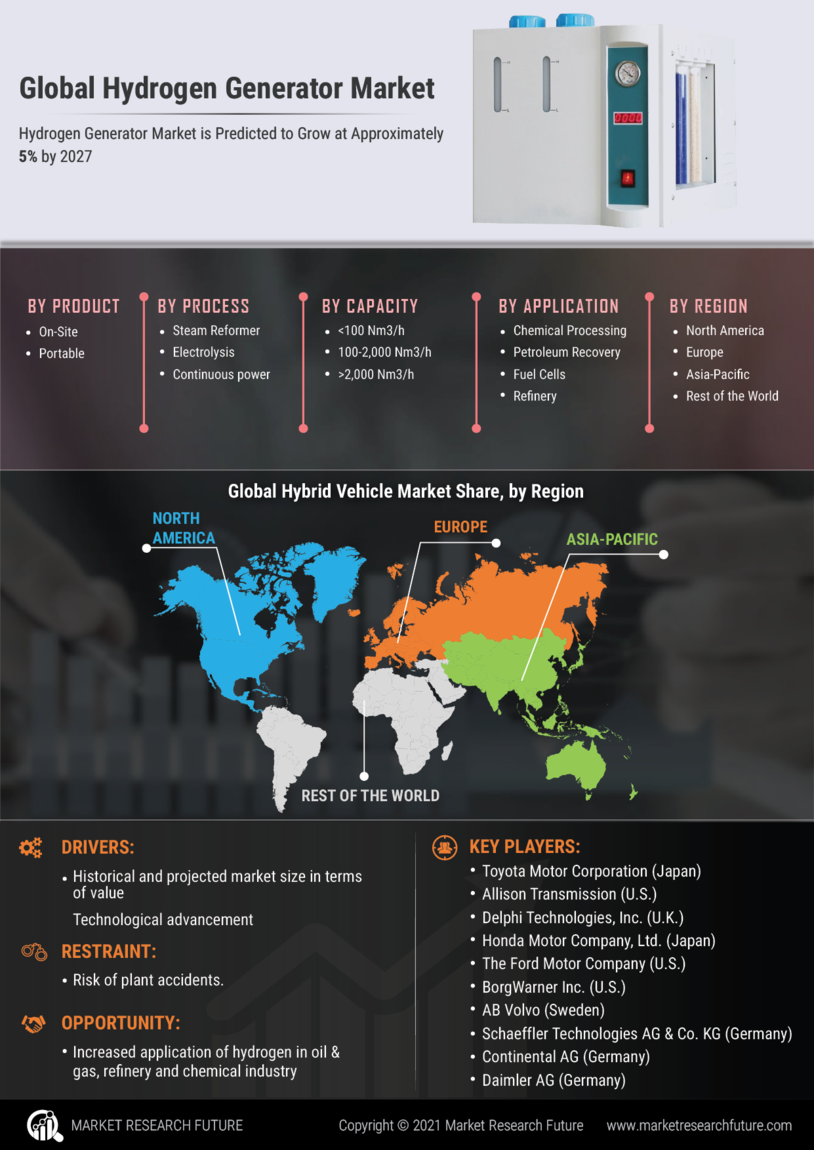 For more than a couple of decades now, researchers have worked for producing renewable energy sources to power the future and introduce decarbonization systems across the industrial world. The element Hydrogen, which is abundantly found in the universe does not exist naturally in its gaseous state and hence it should be manufactured using hydrogen generators. There has been an on-growing demand in the production of hydrogen gas as they can be used as energy carriers, fuel cells for vehicles, and local electricity generation.

Another demand factor is that there is a constant rise in the emission of greenhouse gases by industrial activities globally. The human race has started to realize its responsibility to battle against the rise of global temperature. A recent study has declared that the rate of global carbon emissions has to hit zero by the year 2050 to stop the rising global temperature.

The demand for hydrogen production rises continuously because its higher gravimetric energy density makes it the most sustainable energy carrier. This characteristic of hydrogen gas makes it highly efficient in energy conversion without producing pollution, the by-products produced are water and heat, which doesn’t harm the environment.

Energy demand has gone down: Covid 19 has significantly impacted the growth of the various industrial market. The primary requirement for the production of hydrogen gas is to generate energy, but the complete shutdown except for the essential services globally has brought down the demand for energy across several industries significantly. Furthermore, it is expected to reduce 6% in the year 2020 as the situation of uncertainty prevails.

Negative impact on the automotive industry: It is anticipated that the COVID will negatively impact the automotive industry and likely to have a downfall in the demand for passenger vehicles. As there is a dramatic economic fall due to the pandemic situation, consumers have set back their timelines for adopting large-scale hydrogen fuel cell vehicles due to the major cost differences.

Demand for continuous power supply in hospitals: As millions of people are infected by the Coronavirus and hospitalized, a continuous power supply is mandatory for operating emergency rooms, vital machines, and instruments. Any disruption or power failure could lead to the loss of lives. This emergency has driven the demand for the hydrogen fuel cells, as they are efficient in generating electricity and offers excellent power back up facility. Waterbury Hospital, the University of California, Chino valley medical center, California is some of the customers of hydrogen fuel cells. This initiative has increased the hydrogen generator market size.

The market of hydrogen generators is covered majorly by some of the well-established players across the globe. A few major players operating the market are listed below:

Storing Energy: To store an enormous amount of electricity from bulk productions using solar energy or wind energy storage batteries is not sufficient and often the energy is lost. Renewable sources like solar and wind power often go least productive when the electricity demand is at a peak, as there is a lack of efficient storage of electricity. Hydrogen produced by the electrolysis process is a promising strategy to convert electricity and store them in the form of hydrogen for future usage. This process of electrolysis plays a vital role in driving the demand for hydrogen generators.

Fuel cell demand for the automotive industry is expected likely to increase the demand for the hydrogen generator market size. On comparing, Hydrogen vehicles are highly fuel-efficient for long travels as a fully charged hydrogen vehicle can travel out 300 miles whereas an electric vehicle could travel only up to 100-200 miles. By realizing the efficiency of hydrogen vehicles, California has set a goal to have above 15% of their cars in their state be zero-emission cars by 2025. They have also pledged about 200 million dollars to build 100 more refueling stations across the state.

In the year 2020, the Hydrogen Generator market size was estimated at USD 1093.61 million and it was anticipated that it would raise to 1167.44 million by end of the year as there is always an ongoing growth in the demand for the production go hydrogen gas. The global market size in the year 2015 was 800 million USD, the rapid rise in the market shows the positive growth of the market in the forecast period.

Owing to the endeavor in bringing down the global temperature, the government has imposed stringent emission regulations on the industrial sectors, the perspective has a positive impact in raising the hydrogen generator market value.

A recent study shows that globally Hydrogen gas is consumed about 12 billion standard cubic feet a day by the refineries and this perspective confirms that there will be a continuous growth of market size in the forecast period.

Deep routed analysis has been conducted to determine the most efficient means of producing hydrogen gas in the long run. It has been concluded that large-scale, centralized plants that use the pipeline distribution network is the efficient way of utilizing hydrogen gas for industrial activities. Recently France has pledged to invest about 7 billion euros for the production of hydrogen gassing carbon-free sources.

As there is a growing demand for the production of Ammonia, we can always expect a standard demand for hydrogen gas. We require a huge volume of hydrogen gas for producing ammonia which is a vital component in fertilizers. We can never expect a depletion in the food industry as the world population continues to increase.

By Process: The hydrogen gas can be generated by various processes and can be utilized for industrial and chemical activities.

The types of processes that produce hydrogen gas from fossil fuels are listed below:


The type of processes used to produce hydrogen without involving fossil fuels are listed below:

By product: The hydrogen generators have two different forms to adapt to the applications, they are:

By application: Though there is a wide range of applications, some of the major applications of hydrogen gas are listed below:

At the beginning of this year 2021, Air products have declared that it is going to pledge a $10 billion investment in producing hydrogen gas using the coal gasification process. The prime minister of India has also declared that steps will be taken to allocate space to establish the coal gasification process. It has been declared that about 20,000 crores of Indian rupees will be invested for the project utilizing coal as the source. Considering the abundant availability of coal and the necessity of hydrogen gas production has led to the decision.

North America, U.S, and Canada declared their market value in the year 2015, it was USD300 million during that period. They have initiated various processes this year to ensure the increase the hydrogen production. Japan and South Korea expect a 6% CAGR in the forecast period.

Who are the key players operative in the global Hydrogen generator?

What is the estimated growth rate of the global Hydrogen generator?

The global Hydrogen generator is projected to register a moderate 6.4% CAGR in the forecast period.

What is the product segment of the global Hydrogen generator expected to witness the highest growth?

The on-site segment is slated to expand as the fastest-growing segment.

What is the application segment of the global Hydrogen generator expected to witness the highest growth?

The chemical processing segment is slated to expand as the fastest-growing segment.

What is the market value of the global Hydrogen generator?

The global Hydrogen generator is expected to record a substantial market valuation of USD 2.73 Billion.

Global Hydrogen Generator Market is Predicted to Grow at Approximately 6.4% by 2030