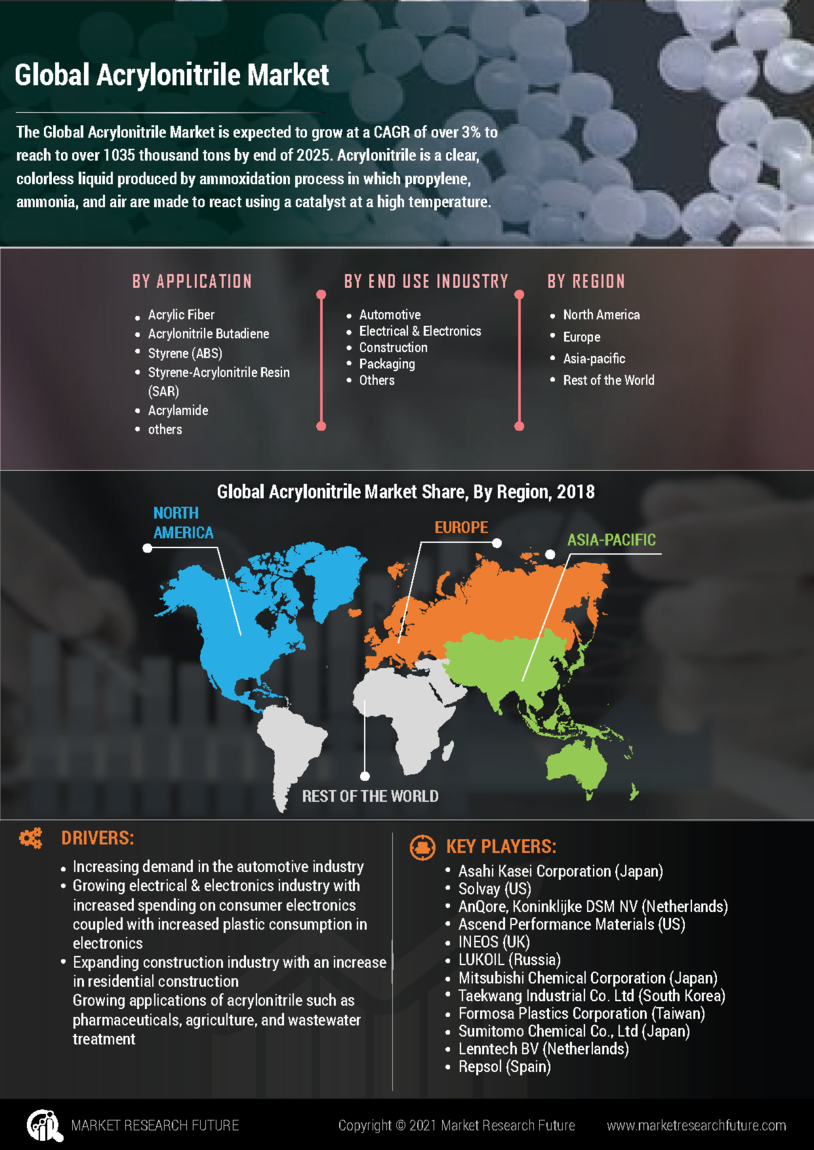 Acrylonitrile has many industrial applications. For example, it’s used in ABS and SAR, among other strategic industrial chemicals. It’s also used in the manufacture of various carbon fibers. In 2018 the chemical ABS and SAR accounted for the majority of the usage of acrylonitrile. This number is expected to increase dramatically in the short term because ABS and SAR have high CAGRs respectively.

COVID-19 proved to be more than just a nuisance. Many people ended up becoming deathly ill because of this virus. Governments around the world sought to contain the spread of COVID-19 through temporary quarantines and lockdowns. This had a disastrous effect on many industries because they were forced to either shut down completely or dramatically slow down production.

The Acrylonitrile market was no exception to this. This market was not essential and was therefore ordered to halt production. Manufacturers in the industries that used the chemicals that this base chemical made were in a bind. They were forced to halt or dramatically slow production down. Affected industries included the automobile and construction industries.

What’s driving growth in the acrylonitrile market is high demand in the automobile and construction industries. Production is starting to pick up to the levels that it was before the pandemic hit in both industries now that the vaccine is being administered around the world. Acrylonitrile is used as the base chemical to produce ABS and this is used in various parts of cars including the instrument panels, trimmings, and dashboards (among other parts!)

Now that demand for acrylonitrile is picking up in the post-COVID-19 world many manufacturers of this base chemical are seeing that this is a market where they can make lots of money in. This is prompting them to invest heavily in research and development to formulate newer generations of acrylonitrile that are more potent and more effective than the previous generations were. They are also on the quest to make acrylonitrile that is safer for humans to use and easier on the environment.

Constantly changing prices of raw materials and increasingly stringent environmental rules and regulations around the world regarding the manufacture of chemicals and their disposal into the environment are restricting acrylonitrile market growth significantly.

Acrylonitrile manufacturers face the challenge of making more powerful and effective versions of this base chemical that are safe for humans and won’t harm the environment while trying to keep the cost of producing it down.

Ascend Performance Materials is a major American player in the global acrylonitrile market. It has managed to retain its superior market position and create a sustainable competitive advantage through years of extensive research and development. This has allowed it to produce newer generations of acrylonitrile that are more potent yet safer for human and environmental use. Some of its applications include fibers for making clothing and solutions for wastewater treatment facilities.

The global acrylonitrile market can be segmented into the following based on application:

The global acrylonitrile market has been segmented into the following based on end use:

The global acrylonitrile market has been segmented into the following based on region:

The global acrylonitrile market share was highest in the Asia-Pacific region as of 2018. This number and percentage are expected to increase dramatically in the next few years. This is because the Asia-Pacific region has the highest regional CAGR of all of the regions in the world. What is driving this is primarily the growth in the urban middle classes. This is especially true in the two nations that contain one-quarter of the world’s population:  India and China.

For example, the middle classes in India increasingly demand to buy four-wheeled vehicles. This is dramatically driving demand for acrylonitrile because (as mentioned before) the automotive industry heavily uses this in manufacturing operations. The same is true in China. Also, the rapid growth of the middle class in both India and China has prompted rapid growth in the construction industry. This has also driven growth in the global acrylonitrile market.

But the Asia-Pacific region is not the only region in the world to experience this rapid growth in market share and regional CAGR. Every developing country in the world is also driving rapid growth in terms of regional CAGR in the acrylonitrile market. This is because they have an insatiable demand for residential and commercial units, automobiles, clothing, and other items that require the large-scale usage of acrylonitrile.

But markets in developed nations are expected to register high growth in terms of regional CAGR and regional market share in the global acrylonitrile market. One such region, in particular, is the North American region. In this region, the American government has expressed significant concern over the state of the environment. This is especially the case now that the Biden administration has come into power.

The result has been the passage of increasingly stringent rules, laws, and guidelines that govern the production and disposal of certain chemicals into the environment Acrylonitrile happens to be one of these chemicals. This has also prompted the world-famous US Environmental and Protection Agency (EPA) to pass more stringent rules that restrict the amounts of carbon that vehicles can emit into the air.

Automobile manufacturers have responded by gravitating towards the usage of lighter materials in their vehicles. These materials need acrylonitrile to be manufactured. In fact, the American automotive sector is expected to be the key and main driver of regional CAGR and growth in market share until 2027. This is unusual for developed nations.

The European Union has also seen an increase in demand for various four-wheeled vehicles. This is the reason why its regional CAGR has been growing at least at a respectable rate. Germany has been a catalyst nation in this regard. However, Germany and all of the nations that comprise the European Union are pushing for the manufacture of two and four-wheeled vehicles that travel faster while using less energy more efficiently. They also want these vehicles to emit far fewer carbon and other air-polluting particles than their predecessors. All of this is driving regional demand in the acrylonitrile market.

The Eastern European economies are growing rapidly. This is driving growth in the automotive and construction sectors. This, in turn, drives demand for acrylonitrile usage.

The global acrylonitrile market remains highly competitive. Many companies are enticed to enter this market. They are driven by the higher CAGR and the fact that there is money to be made in this industry.

Companies are finding that they can compete only through research and development investment. They are also entering into joint ventures and mergers and acquisitions. These are strategic and they allow them to ‘be in the right place at the right time’ when trying to enter into new markets and strengthen their position in existing markets.

Ascend Performance Materials is a successful American company in the global acrylonitrile market. It has maintained its superior position by investing heavily in research and development. For example, it has managed to manufacture a new generation of acrylonitrile that’s much more effective and has many more useful applications. This substance is safer for humans and the environment.


June 2021- The manufacture of petrochemical products in South Korea, Taekwang Industrial, will set up an acrylonitrile joint venture plant with LG Chem to meet the rising demand in the global market. Commercial production of the facility with a yearly manufacturing capacity of 260,000 tons is to start in 2024. Acrylonitrile is a vital monomer for producing useful plastics and important copolymers, such as synthetic rubbers or acrylonitrile butadiene styrene (ABS). Taekwang Industrial supplies almost 1/3rd of South Korea's acrylonitrile. April 2021- Trillium Renewable Chemicals, Birmingham, Ala., a new start-up company, announced plans to manufacture chemicals from renewable feedstocks, such as acrylonitrile, for ABS with a net-zero footprint as per CEO Corey Tyree's statement. He said that the technology would improve GHG (greenhouse gas) footprint and the supply chain security of ABS makers. The latest start-up was jointly built by Capricorn Partners and Southern Research (SR), Belgium-based venture capital and investment firm, an independent nonprofit, scientific research organization with over 400 engineers and scientists working together.

The global acrylonitrile market is growing at 3%. The market is expected to be worth 1035 tons by 2025. What’s mainly driving growth is growth in the automotive and construction industries. This is especially true in India, China, and other developing nations.

At what CAGR is the acrylonitrile market is projected to grow during the forecast period?

What will be the value of the acrylonitrile market during the forecast period?

The acrylonitrile market is predicted to touch USD 1035 thousand tons by 2025.

Which region is expected to dominate the acrylonitrile market?

The APAC region is expected to dominate the acrylonitrile market.

What are the different end use industries for acrylonitrile?

Different end use industries for acrylonitrile include packaging, construction, automotive, and others.

Which factors may impede the acrylonitrile market growth?