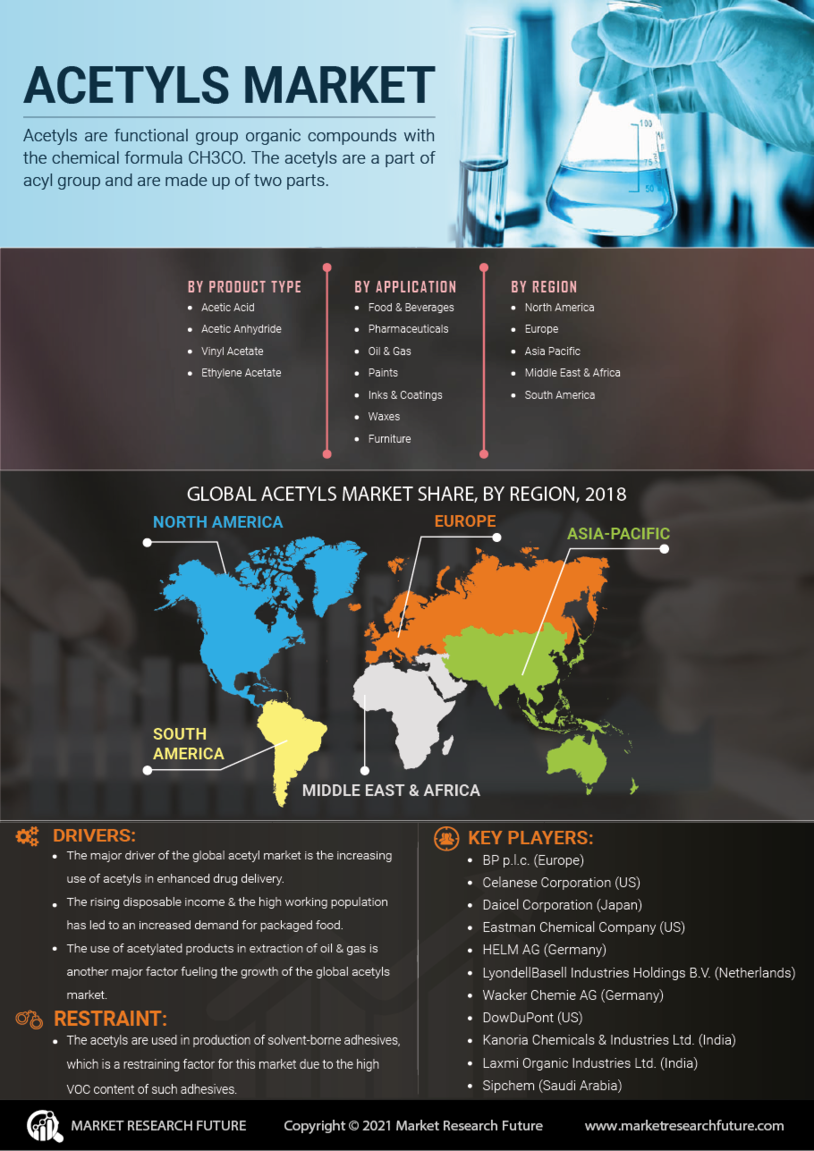 Acetyls are functional group organic compounds with the chemical formula CH3CO. The acetyls are a part of acyl group and are made up of two parts. Just like acyl group, the first part is a carbonyl group, which is made up of a carbon double bonded to an oxygen. The second part is an alkyl group, specifically, methyl group.

The major driver of the global acetyl market is the increasing use of acetyls in enhanced drug delivery. The acetylated compounds provide increased ability to cross the selectively permeable blood-brain barrier. This results in the drug to reach the brain at a faster rate, which increases the effectiveness of the drug. It is an important raw material used for production of medicines such as aspirin, paracetamol, sulfa drugs, and others. The rising geriatric population and the sedentary lifestyle has led to an increased number of generic health issues, such as fever, cough and cold, body pains, and nausea. This, in turn, drives the demand for acetyl in pharmaceuticals application. The use of acetic acid in food & beverage as a flavor enhancer, flavoring agent, an acidifier, color diluent, curing agent, pickling agent, pH control agent, solvent, and preservative. It is used as a food ingredient in marinades, mustard, catsup, vinaigrettes and salad dressings, sauces, canned fruits, and mayonnaise. It is also used in meat, poultry, milk, and cheese products. The rising disposable income and the high working population has led to an increased demand for packaged food, which is expected to fuel the demand for acetyls during the review period. Furthermore, the use of acetylated products in extraction of oil & gas is another major factor fueling the growth of the global acetyls market.

However, the acetyls are used in production of solvent-borne adhesives, which is a restraining factor for this market due to the high VOC content of such adhesives.

The market in Asia-Pacific dominated the global acetyls market in 2017 on account of the increasing demand for product in the food & beverage and pharmaceuticals application. Furthermore, the rising geriatric population coupled with the affordability of generic drugs is expected to fuel the demand in the region. Moreover, the growth of paints & coatings industries in countries such as India, China, Thailand, and Malaysia coupled with the high demand for paints & coatings in complimentary end-use industries such as automotive, construction, electronics, ship-building, and aerospace is projected to drive the market growth.

The market in Europe and North America is expected to witness significant growth during the forecast period, on account of the high demand for acetyls in paints & coatings, food & beverage, and pharmaceuticals industries.

The growth in Middle East & Africa region can be attributed to the increased oil & gas exploration activities in countries such as GCC, UAE, and others.

The global acetyls market has been segmented on the basis of product type, application, and region.

Based on product type, the market has been segmented into acetic acid, acetic anhydride, vinyl acetate, ethylene acetate, and others.

By application, the market has been segmented into food & beverages, pharmaceuticals, oil & gas, paints, inks, & coatings, waxes, furniture, and others.

Which region will dominate the acetyls market?

What are the major applications of acetyls?

Some of the major applications of acetyls include furniture, waxes, inks and coatings, food and beverages, and others.

What are the key factors driving the growth of the acetyls market?

Increasing use in pharmaceuticals and food & beverage industry are boosting market growth.

Which factors may limit the growth of the acetyls market?

What are the different strategies incorporated by industry players to create a foothold in the acetyls market?

Different strategies incorporated by industry players to create a foothold in the acetyls market include mergers and acquisitions, R&D, product launches, and others.

Green And Bio Based Solvents Market Size, Share, Growth And Forecast To 2030