The 3D Concrete Printing Market share was valued at a final figure of 69.9 Million and is expected to expand on a global scale at a CAGR of 14.05% during the historic forecast period 2021-2028.

Urbanization is top-notch in both the developed and developing countries which are giving rise to residential construction. There is a bloom in the day-by-day demand for construction activities and further, the global expansion being led in the developing region is fostering the market to record excellent growth during the forecast period that will be ending in 2028.

The pandemic has emerged as a trend and game-changer for the 3D concrete printing market. The trends have been such that people are preferring to sit at their places and further, they are altering their life decisions followed by their life conduct and marketing choices. The pandemic has introduced new trends that are pushing people to make alterations to their choices and lifestyle accordingly. It has been a tough time for people globally that is pushing them to have a basic understanding of the contingencies that lay ahead of them, as a part of the forecast period followed by the trends that are required to keep the medical professionals on their toes and thus, help in bringing down the positivity rate of the infection. The market has hit a low which has resulted in losses and the inability of the market players to meet the needs of people or make judicious use of the raw material and resources that are available to the producers and manufacturers in the market premises.

Hence, the 3D concrete printing market players are laying their focus on the increase in funds and investments that will put the market players in a position to enhance the product portfolio for the betterment of the audience’s needs and requirements.

The market report helps in understanding the factors and market scenario that is likely to give birth in the global market functioning. The 3D concrete printing market value is expected to rise during the ongoing forecast period of 2021-2028 is because of the efforts that have been employed by the prominent market players in the global market premises that are mentioned as follows:

The 3D concrete printing market share is likely to grow owing to the rapid expansion of the market at a reliable CAGR rate during the forecast period ending in 2028. Studies suggest that the market has been witnessing an increased degree of demand for both customized and money-efficient constructions that will motivate the producers to carry out larger and elaborated functions to meet the diversification and rising needs. Also, the market is witnessing an increase in the funds and investment for the development of the strong infrastructure that will benefit the market to grow and cover the losses of the pandemic period.

However, the 3D concrete printing market is witnessing a prominent need for skilled labor and constant capital investment for 3D printing. The timely unavailability and issues like the pandemic are creating a halt and further, hampering the market from growing in the global scenario during the forecast period that will be ending in 2028.

The rising degree of investment to use the best technological angle and degree is helping the degree of rapid urbanization and industrialization which is well completing the need of residential construction. This has an excellent role to play for the 3D concrete printing market growth in the period that will be ending in 2028. 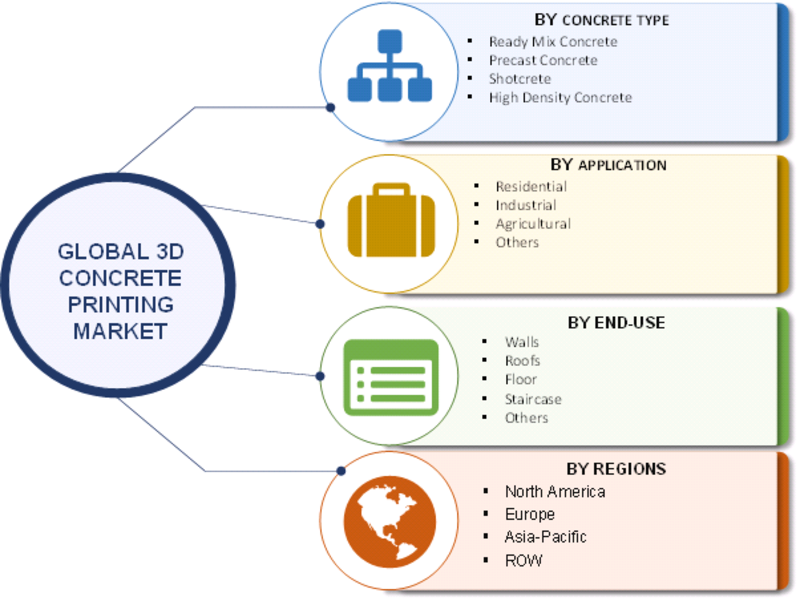 The 3D concrete printing market growth can be attributed to the fulfilling production conducted by the market segments followed by their rising ability to meet the varied needs of the target audience. The global market has been segmented based on the following segment heads:

The 3D concrete printing market has been segmented based on offering and includes printing services, and the materials used to carry the manufacturing and production processes.

The 3D concrete printing market has been segmented based on the technique and includes extrusion-based, and powder-based techniques.

The 3D concrete printing market has been segmented on the end-use and includes building, infrastructure, amongst others.

The global market is functional in major geographical regions like the Americas, Europe, and others like the Asia Pacific region, and the Middle East, and Africa.

The North American region was accounted for the largest market share of 35.63% during the historic forecast period that had ended in 2018. In this period, the region gained popularity with a market value of USD 10.0 million and is projected to grow at a CAGR of 14.20% during the forecast period ending in 2028. There has been a growing consumer preference for green buildings and sustained investments in commercial real estate that are emerging as the major market factors driving the growth of the market in the North American region.

The 3D concrete printing market report has been prepared to help the market investors have a fair understanding of the market trends that will influence their decisions during the forecast period ending in 2028. The report helps in understanding the steps that have been taken to minimize the effect of the pandemic on the market operations followed by the substantial growth predicted for the market in the global premises.

Which is the region to grow at the highest CAGR during the period?

The North American market is likely to grow at the maximum CAGR.

What is the expected CAGR of the market?

The expected CAGR for the market stands at 14.05%.

The market is likely to attain a market value of 69.9 million.