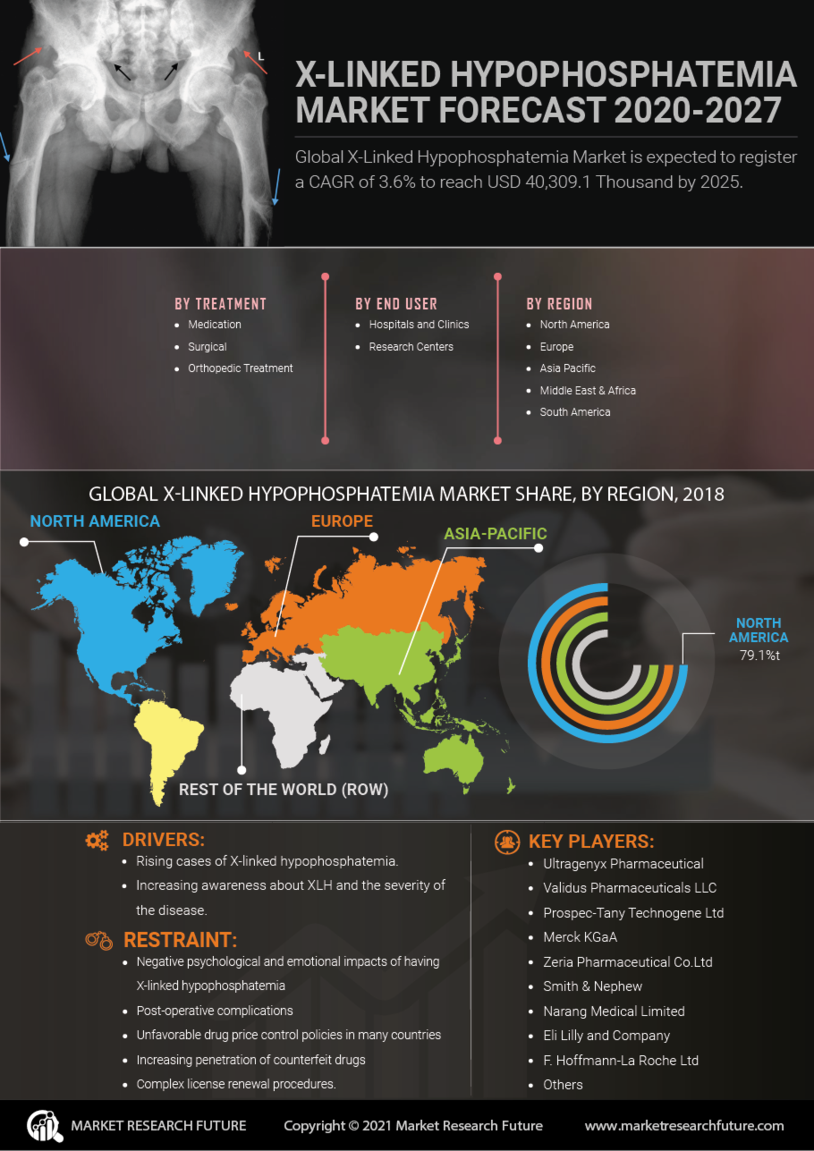 X-linked hypophosphatemia (XLH) is an inherited disorder characterized by low levels of phosphate in the blood. The phosphate levels reduce as it is abnormally processed in the kidneys, which leads to the loss of phosphate through urine (phosphate wasting) and leads to soft and weak bones, causing rickets. XLH is usually diagnosed in childhood, and symptoms include bowed or bent legs, short stature, bone pain, and severe dental pain. XLH is caused by mutations in the PHEX gene on the X chromosome, and the inheritance of the X-linked is dominant. The treatment generally involves supplements of phosphate and high-dose calcitriol (an active form of vitamin D) and may also include growth hormones and corrective surgery. The key factors responsible for driving the market are the increasing prevalence rates of XLH, growing awareness about XLH. However, negative psychological and emotional impacts of having X-linked hypophosphatemia, post-operative complications, unfavorable drug price control policies in many countries, increasing penetration of counterfeit drugs, and complex license renewal procedures are hindering the growth of the X-linked hypophosphatemia market.

XLH is an inherited phosphate metabolism disorder in which inactivating mutations of the PHEX gene lead to local and systemic effects such as impaired growth, rickets, hearing difficulties, enthesopathy, osteomalacia, bone pain, bone abnormalities, spontaneous dental abscesses, osteoarthritis, and muscular dysfunction. Due to the rising cases of XLH in developing and developed economies, the global XLH market is expected to grow at a steady rate during the forecast period. For instance, according to the European Journal of Endocrinology statistics published in 2016, the incidence of XLH has been estimated to be 3.9 per 100,000 live births and has a prevalence of 4.8 per 100,000 people. Also, according to the study published in May 2016 by NIHR Horizon Scanning Research & Intelligence Centre, XLH affected more than 500 children in the UK.

Similarly, according to the statistics published in 2017 by the Food and Drug Administration (FDA), XLH affected an approximate of 3,000 children and 12,000 adults in the US. And according to a report published in 2017 by the National Institute for Health and Care Excellence, there were approximately 250 children and young people with XLH in England, and up to 2,500 adults, till date. Thus, the overall market growth is projected to rise owing to the rising prevalence rates of XLH, which required adequate drugs and therapies for treatment.

The X-linked hypophosphatemia (XLH) market by treatment has been segmented into medication and Surgical or orthopedic treatment. The X-linked hypophosphatemia market has been categorized by the end user into hospitals and clinics and research centers. The research centers segment is expected to account for the largest market share during the forecast period attributing to the increasing prevalence of XLH, increasing awareness regarding the disease, and growing research activity for its treatment.

The XLH market in the Americas is expected to hold a major market share owing to the growing prevalence of XLH in the US and Canada and the presence of a well-established healthcare sector. The rising research funding towards rare diseases such as XLH and the high healthcare expenditure is also expected to fuel the growth of the market during the forecast period. For instance, Genome Canada and the Canadian Institutes for Health Research entered into a partnership to study rare genetic diseases by using Next-Generation Sequencing (NGS) technology. Similarly, the International Rare Diseases Research Consortium (IRDiRC) is a Scientific Secretariat that works in collaboration with Orphanet. Since 2010, IRDiRC financed over 3,000 projects. Moreover, according to the statistics published in 2017 by the Food and Drug Administration (FDA), XLH affected an approximate of 3,000 children and 12,000 adults in the US. Moreover, the rising government funding for the healthcare sector, the increasing prevalence rate of rare diseases, and research funding are expected to propel the growth of the market in this region.

The players operating in the global X-linked hypophosphatemia (XLH) market are focusing on product launches, along with expanding their global footprints by entering untapped markets.

What would be the CAGR of the X-Linked Hypophosphatemia Market during the forecast period (2020-2027)?

X-Linked Hypophosphatemia Market CAGR would be 3.20 during the forecast period.

What would be the X-Linked Hypophosphatemia Market valuation by 2025?

X-Linked Hypophosphatemia Market valuation would be USD 35.53 Million thousand by 2030.

Which end user would dominate the X-Linked Hypophosphatemia Market?

Which region would dominate the X-Linked Hypophosphatemia Market?

Name the players involved in the X-Linked Hypophosphatemia Market.

The Increasing Prevalence Rate of XLH is set to Propel the Growth of the Global X-linked Hypophos...