According to the latest research report, the global Waterborne Epoxy Resin Market size is anticipated to grow significantly during the forecast period. Chemical compounds that can be dissolved in water are known as water-borne epoxy resins. They are employed in end-use industries because of their non-reactive properties and simplicity of application. In addition, the key trends and aspects impacting the market with confidence are its separation simplicity, improved choice, endurance, and outstanding quality. Consequently, they're found in a wide range of products, including paints, adhesives, and composite, to name just a few.

Too far, low molecular weight epoxy resins have dominated the waterborne epoxy resins industry, and this supremacy should continue for the foreseeable future. The superior resistance to abrasion, rapid drying, and ease of mixing is popular in the end-use industry. In addition, its expanding use in architecture, textiles, automobiles, and other industries is expected to boost the market in the coming few years. The coating is expected to develop at a substantial pace because of its widespread application in paints and colloidal paint, among other products. A rise in the product's use in composites, coatings, and adhesives is anticipated over the projected period, fueling the Waterborne Epoxy Resin Market growth.

This report contains all the information on the global Waterborne Epoxy Resin Market analysis and its strengths. In addition, the report also contains the culmination of dynamics, segmentation, key players, regional analysis, and other essential factors. And a detailed analysis of the global Waterborne Epoxy Resin Market forecast for 2030 is also included in the report.

Nearly every nation in the world has been hit by the COVID-19 virus ever since it was found in December 2019. The WHO has declared it a general populace medical crisis. The coronavirus disease 2019 has already had a big impact on the world, and it will have a big impact on the Waterborne Epoxy Resin market during the forecast period.

Waterborne epoxy resin is by far the most extensively utilized resin in industries because of its unique qualities, including amorphous thermosets with great mechanical hardness and durability and excellent thermal and acoustic properties. This, in turn, is expected to drive market development. In addition, the requirement for waterborne epoxy resin-based materials from the wind energy and aerospace sectors is expected to increase during the projected period, boosting market development.

Consumer spending for lightweight composites in the automotive and aerospace sectors is moving as a result of rising consciousness about carbon dioxide emissions and the higher fuel crisis, which is likely to have a favorable influence on the development of the composites segment throughout the forecast timeframe.

The utilization of volatile organic compounds in epoxy coatings has been subjected to stringent regulation by governments in a number of nations, with the usage of these chemicals projected to have a negative influence on the climate. This is a significant impediment to the expansion of the worldwide waterborne epoxy resin market revenue.

Over the past decade, the high cost of waterborne epoxy resins is becoming a significant issue for a wide range of businesses. The costs of aqueous epoxy resins are expensive compared to epoxy resins' prices. There has also been relatively little progress in the production of Bisphenol A and novolac resins. These textiles are extensively employed in a variety of end-use industries, including automobile, commercial, and maritime, where they are used as coatings, composites, and adhesives. In part due to the fact that aqueous epoxy resins have only recently been developed, this is the most significant impediment to the growth in desire for waterborne epoxy resins. Another issue contributing to increased pricing for waterborne epoxy resins is matrix creation; the process of creating a matrix is time-consuming and expensive, requiring batch procedures in controlled environments at extreme temps.

Lightweight and fuel-efficient cars are in high demand as a result of constant advancements in the automobile and aerospace sectors. Companies must employ a variety of lighter materials, such as aluminum, steel, composites, or polymers, to make vehicles lighter and more fuel-efficient. Fasteners like welds, rivets, and bolts may be replaced with adhesives, reducing their need in vehicles. Metal bodywork and bolts would add additional weight to cars if they were not held together using adhesives and composites. In addition, collision and impact protection of automobiles is improved thanks to the employment of these elevated materials and adhesives. As a result, the aqueous epoxy resins market is expected to grow significantly over the next several years.

The market is segmented based on end-use, type, application, and region. The global water-borne epoxy resins market trends are expected to witness decent growth during the forecast period.

The market is segmented into building, textiles, automobiles, furniture, packing, and other categories based on the propulsion types. 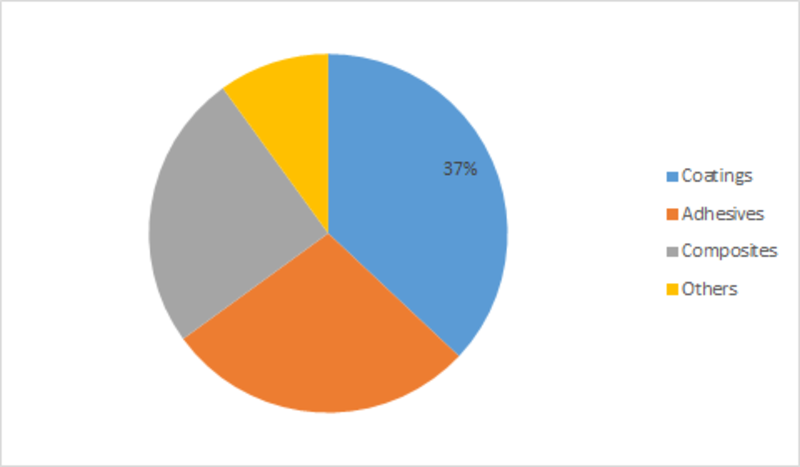 Additionally, Europe is likely to see moderate development when compared to other areas due to the gradual recovery of manufacturing sectors following the recent economic slump in the region. Africa has a small proportion of the waterborne epoxy resins industry. Still, it is predicted to develop substantially in the next years due to an increase in infrastructure investments, notably in South Africa And Nigeria and other emerging markets.

Technology introductions, acquiring, and research and development operations are some of the primary tactics companies use in the Waterborne Epoxy Resin Industry. The market has been dominated by the five most important competitors, who account for xx percent of the total market share in 2020.

On the basis of type:

On the basis of application:

On the basis of End-use industry:

On the basis of region:

What is the most widely used kind of aqueous epoxy resin today?

What is the most important factor driving the market?

The demand for aqueous epoxy resins from the coatings market sector is the primary driver of the market for these resins.

Growing demand from the paints and coatings industry is the major driver for the waterborne epoxy resin market.

Leading players in the market include Hexion, Nan Ya, and Huntsman, among others.

Growing consumption of water-borne epoxy resins in end-use industries is estimated to drive the m...