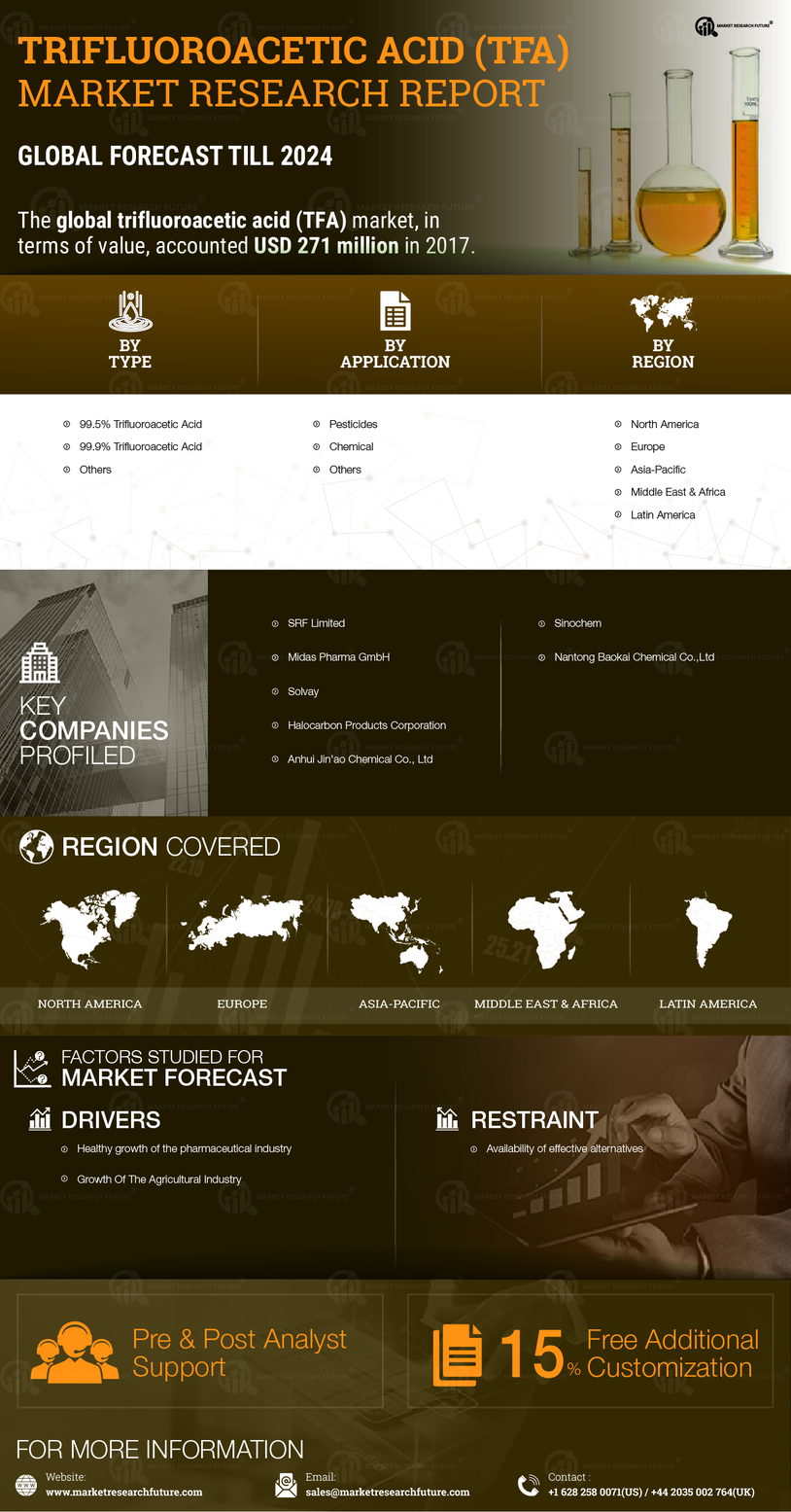 Trifluoroacetic acid (TFA) is a strong carboxylic acid widely used in organic chemistry. TFA is an important component in the synthesis of pharmaceuticals, agrochemicals, and performance products. TFA is a liquid substance, colorless to pale yellow and with a pungent odor. It is characterized by its strong acidity (pKa 0.23 at 25°C in H2O), high dielectric constant (= 42.1 at 25°C), miscibility with water and most organic solvents, and relativity low boiling point (71.8°C).

The outbreak of COVID-19 has had a slightly negative impact on the global trifluoroacetic acid market due to the disruptions in the supply chain and the non-availability of labor to carry out the production activities. Limited or full-fledged lockdown strategies were implemented across the world to contain the spread of the virus. During the initial phases, these lockdowns severely led to a significant drop in global industrial production. According to the World Bank's January 2021 Global Economic Prospects report estimations, the real gross domestic product of the world contracted by around 3.5%.

Furthermore, the raw material prices also increased for a significant part of 2020 due to limited market availability. Thus, disruption in the supply of key raw materials and limited availability of labor had an adverse impact on the trifluoroacetic acid market production facilities located across the world. According to the United Nations, the global economy is projected to contract by around 3% or more instead of registering 2.5% growth projected by the World Economic Situation and Prospects report 2020.

Asia-Pacific dominated the global market with a value share of 38.15 % in 2021 and is projected to register the highest CAGR of 5.8% to reach USD  116.42 million by the end of 2030. The market growth in Asia-Pacific is driven by various factors, including rising industrialization and urbanization, increased foreign investments, government subsidies, and rising demand from South Asian countries such as India, Thailand, and Indonesia. Europe held the second-largest market share of 29.81% in 2020 due to the growth of the major end-use industries in the region.

Europe held the second-largest market share of 29.81% in 2020 due to the growth of the major end-use industries in the region due to its extensive usage in pharmaceuticals, agrochemicals, and performance products. In 2020, Germany accounted for the largest share in Europe and was followed by France. The growth of markets in Latin America and the Middle East & Africa are likely to be driven by the increasing . The ascent in the maturing populace prompts an increasing number of diseases and the necessity of medical facilities, which boost the growth of the global pharmaceutical industries.

The North American market accounted for the third-largest share in 2020 and is projected to record a CAGR of 3.0% during the review period. North America is another prominent market for ammonia with the increasing agricultural production, the US being the major producer and exporter in the region. It is one of the leading producers and suppliers of agricultural produce. Besides, the increasing demand for corn, cereals, and other corn products is fueling the growth of the agricultural industry in the US and, thus, the trifluoroacetic acid market.Competitive Landscape

The players in this market have shown an aggressive approach towards expansion and increasing production capacities. This is because the key players aim to capture the large consumer base of pharmaceuticals & agriculture industry. The global trifluoroacetic acid market consists of several major players, including Tier 1 and Tier 2 manufacturers. The market is mainly consolidated with few players dominating the Global market. The surge in the demand for trifluoroacetic acid is likely to favor the global market growth in the coming years.

The global trifluoroacetic acid market is segmented by type, application and region in the report. In terms of insights, this report has focused on various levels of analysis such as market dynamics, value chain analysis, Porter's five forces, competitive landscape, and company profiles—all of which comprise and discuss views on the global global trifluoroacetic acid market emerging and fast-growing segments, regions, and countries.

What growth rate global trifluoroacetic acid market would register in the future?

The global trifluoroacetic acid market would register a growth of 5.27  %.

Which industry will play a crucial role in taking the trifluoroacetic acid market ahead??

What is the key restraining factor for the global trifluoroacetic acid market?

Who are the notable players profiled in the trifluoroacetic acid market?

What are the specific strategies that industry players have incorporated to create a niche in the trifluoroacetic acid market?

Specific strategies that industry players have incorporated to create a niche in the trifluoroacetic acid market include joint ventures, product launches, and strategic alliances.

Trifluoroacetic Acid Market is predicted to reach USD 467.7 million a CAGR of 5.27% during the fo...