Sugarcane wax occurs as a thin layer on the outside of the stem of the sugarcane and is obtained as a by-product obtained while manufacturing sugarcane products. It is available in several colors, including hard green, brown, and tan solid. It is widely used in pharmaceuticals, vegetable & fruit processing, chocolate products, cosmetics, and polishing materials.

The Global Sugarcane Wax Market is characterized by the presence of a limited number of players. The market is highly consolidated, with all the players competing to gain larger market shares. The key manufacturers of sugarcane wax compete based on cost, brand identity, product quality, and availability of raw materials. The key players engaged in the manufacturing of sugarcane wax are expanding their production capacities and investing in research & development activities to gain an advantage over their competitors.

The prominent factors driving the growth of the global sugarcane wax market include the rising demand for sugarcane wax as a preservative in the processing of fruits and vegetables and increasing investments in R&D in the pharmaceutical industry. Furthermore, the growing demand for specialty and premium chocolate products along with increased consumption of gum confectionaries and chocolate products in the developing economies of Asia-Pacific is also expected to fuel the demand for sugarcane wax during the forecast period. The socio-economic factors such as rapid urbanization; expanding populace; changing taste and preferences; and rising per capita disposable income are propelling the market growth in developing economies of the region.

Sugarcane wax is used as a pharmaceutical excipient. Moreover, it contains about 60% octacosanol, which helps in decreasing cholesterol and triglyceride levels. The increasing per capita disposable income, changing lifestyle, and the rising health awareness among consumers have resulted in substantial spending on dietary supplements in emerging economies of Asia-Pacific, such as China, India, and the ASEAN countries. The market growth in North America and Europe is expected to be driven by the presence of the established pharmaceutical industry, rising geriatric population, and an increase in the number of people with cardiovascular diseases. 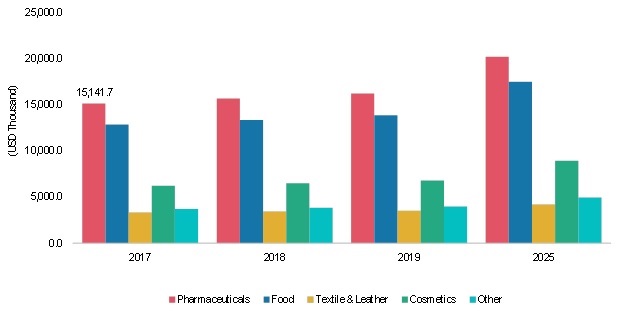 Based on application, the global sugarcane wax market is segmented into pharmaceuticals, food, textile & leather, cosmetics, and others. The pharmaceuticals segment accounted for the largest market share of 36.6% in 2018, with a market value of USD 15.7 million; it is expected to register a CAGR of 3.7% during the forecast period. However, the cosmetics segment is expected to be the fastest-growing application segment, primarily due to the increasing R&D activities by manufacturers. 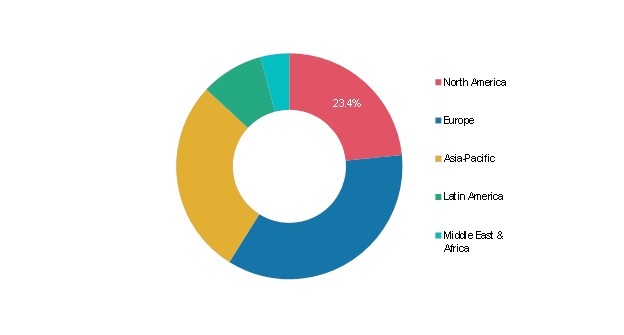 Geographically, the global sugarcane wax market has been divided into Asia-Pacific, Europe, North America, Latin America, and the Middle East & Africa. Among these, the European market held the largest share of over 35%, with a value of USD 15.2 million. The regional market is projected to register a CAGR of 2.8% during the forecast period. Germany and the UK accounted for more than half of the sugarcane wax market in Europe. The market growth in Europe is expected to be driven by the presence of the established pharmaceutical industry, rising geriatric population, and an increase in the number of people with cardiovascular diseases. The sugarcane wax market in Asia-Pacific is expected to register the highest CAGR of 5.18% during the forecast period. The growth in the region is attributed to increasing disposable income, changing lifestyle, the increasing use of dietary supplements, and the growing popularity of organic and natural cosmetic & personal care products.

What is the projected market value of the global sugarcane wax market?

Global SUGARCANE WAX market is touted to record a substantial market valuation of USD 55.7 million by 2025.

What is the estimated growth rate of the global sugarcane wax market?

Global sugarcane wax market is projected to register a moderate 3.87% CAGR in the forecast period.

The massive demand for sugarcane wax for its use as a preservative in the processing of fruits and vegetables are the primary growth inducer of the market.

Which region is expected to observe the highest growth?

The APAC is poised to secure the highest CAGR.

What is the application of the global sugarcane wax market expected to witness the highest growth?

The food and beverage segment is slated to mature as the fastest-growing segment.

Who are the significant players operative in the global sugarcane wax market?