The major factor driving the solar battery market is the increasing use of these batteries in applications such as grid-tied systems, backup power, solar streetlights, and smart grid. For instance, in grid systems, solar batteries act as an emergency power source for renewable energy systems, which are tied to the local utility grid. In solar streetlights, solar batteries provide reliable power with significant cycle life in all the conditions to ensure quick payback on large capital projects. Similarly, in smart grids, the consistent flow stores excess energy and provides critical energy back to the grid during peak hours are some major advantages that these batteries provide to various applications. Moreover, the growing energy storage industry is also likely to boost the installation of solar batteries, including lithium-ion batteries, in various industries. Additionally, the increasing manufacturing of wearable electronics, implantable medical devices, and flexible electronics is expected to further fuel the growth of the solar battery market.Moreover, due to the growing focus on reducing carbon emissions and the effects of generating electricity using non-renewable sources, the demand for renewable energy solutions is expected to increase, including solar batteries. Thus, the increasing demand for energy generation from renewable energy sources is expected to drive the growth of the global solar battery market during the forecast period.

However, the solar sector has been affectedby the ongoing pandemic situation. Being one of the key enablers in the government target to achieve the clean energy target, the solar sector has faced an uncertain halt in projects. Although, the solar sector has experienced significant growth over the past two decades. But the covid crisis could considerably disrupt this momentum. To overcome this crisis, governments of all the countries are aiming to tackle these challenges and determining the pace of the deployment of solar energy in the near future. Additionally, according to reports by the Ministry of New and Renewable Energy (MNRE), in India, only ~222 MW of solar capacity was achieved in March as all activities have come to a halt due to the pandemic. Thus, the installation of power generation equipment, including solar batteries, is expected to remain slow due to the pandemic. Moreover, India and many other countries in Asia are dependent on other countries for solar batteries, especially China, which has put many upcoming renewable projects on hold and can slow down the overall installation process. However, there are various factors that the governments are taking into consideration while rejuvenating the clean energy projects as corrective measures. These factors includethe adoption of new digital technologies such as solar software, analysis of the viability of future projects, and investment in innovation such as batteries or bifacial modules.

Many major players such as Tesla, LG, Loom Solar, and Panasonicare actively focusing on providing a broad product portfolio related to Solar batteries. For instance,in April 2021, Tesla announced that it would bundle its solar products, solar roofs,solar batteries, and solar panels with its Powerwall home battery pack going forward. Such developments are expected to drive the growth of the global solar battery market during the forecast period.

The global solar battery market has been segmented based on type andend use. Based on type, the solar battery market is divided intolithium-ion, lead-acid, and flow battery. The lithium-ionsegment is expected to hold the largest share in the global market during the forecast period.This can be attributed to severalmajor advantages offered by advanced lithium-ion batteries,such as high storage density, suitability for hybrid electric vehicles, and compact size. Due to these benefits, lithium-ion batteriesare the ideal type of solar battery for solar-based applications. Based onend use, the global market is divided intoindustrial, commercial, and residential. The industrial segment is expected to grow at the fastest rateasthere is strong demand from various industrial end-users for additional energy storage solutions. Moreover, new incentives and tax credit schemes from governments will further attract new end-users in this sector. 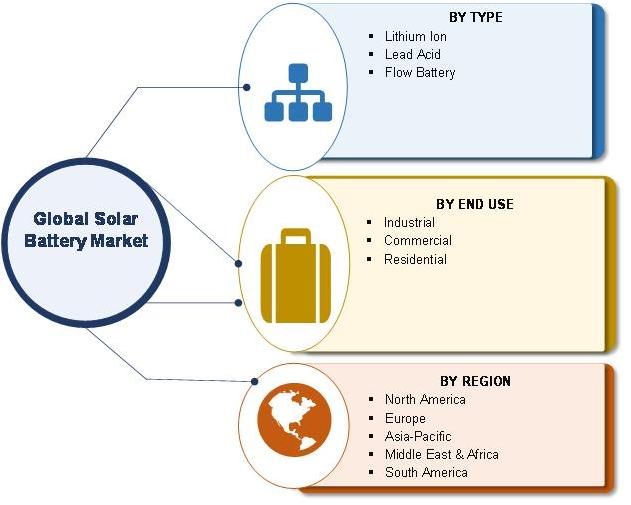 At what CAGR is the Solar Battery market predicted to grow during the forecast period?

What is the forecast period of Solar Battery market research report?

The forecast period for Solar Battery market research report is 2020-2027.

Which region will lead the global Solar Battery market?