Sodium Nitrite Market Research Report: Information by Grade (Food Grade and Industrial Grade), by Application (Food Processing, Fertilizer, Pharmaceutical, Rubber Processing, and Others), and by Region (North America, Europe, Asia-Pacific, and Rest of the World)—Forecast till 2028

The global sodium nitrite market size is projected to reach approximately USD 241.60 million by 2028, at a CAGR of 3.9% from 2021 to 2028. Sodium nitrite is an antioxidant and a salt used to cure meat like hot dogs, bacon, and ham. This salt hampers the growth of botulism-causing bacteria and averts spoilage. In addition, it provides cured meats with their characteristic flavor and color. It is coded as E250 by the European Union (EU).  The Food and Agriculture Organization (FAO) expert committee on food additives has statedan acceptable daily intake (ADI) of 0-0.06 mg/kg. The US Department of Agriculture (USDA) specifications state that sodium nitrite content should not exceed 200ppm in finished products. Using sodium nitrite is banned in countries including Sweden, Norway, Germany, and Canada.

The impact of COVID-19 has negatively affected the distribution and sales of different products across several industries. Many countries worldwide are under lockdown and have sealed their borders to control the spread of the virus. The impact of COVID-19 on logistics has disturbed the supply of raw materials. Owing to this, the production capacity has decreased and, thus, there is a shortage of products. These factors are likely to cause a price rise in products in the short run.

The supply chain of the sodium nitrate market comprises manufacturers, distributors, and end user. The COVID-19 pandemic has impacted the supply chain, as many countries are under lockdown and have sealed their borders to control the spread of the virus. The global economy is struggling with the pandemic situation currently. Due to this, it has impacted the global sodium nitrate market. The impact is growing owing to the rapid weakening of global investment flows. Moreover, the government has imposed strict containment and preventive measures in several countries for controlling the impact of the outbreak. This has led to a significant restriction in transportation, driving a knock-on effect globally. These effects are expected to continue owing to the uncertainty in the global market and measures to address the supply/demand imbalance.

The global sodium nitrite market has witnessed moderate growth in recent years. The anti-meat spoilage potency of sodium nitrite also fights the effects of bacterial overgrowth that leads to unfavorable meat characteristics like undesirable meat odor, rancidity in meat products, and unacceptable flavor. The increasing adoption of organic farming practices across the globe is also creating an opportunistic market for the players which are offering sodium nitrite for fertilizer applications.


The growing demand for organic products worldwide has led small-scale farmers in developing economies to implement organic farming practices. Growth is especially high in emerging economies such as Brazil, China,India, and Argentina, owing to the rising awareness among farmers about the hazards of chemical fertilizers. Considerable investments are being made in organic production in these countries in an effort to shift away from conventional farming practices. In Asia-Pacific, there was a large market for organic packaged food products in Japan and South Korea. However, there have been substantial developments in countries including China and India recently. The focus of the agricultural sector in such countries is shifting from exports to consumption of domestic products. Support of government for promoting organic farming also plays animportant role. In Thailand, the government launched a large-scale project in 2017 for farmers to receive financial support for buying organic seeds, reducing their dependence on pesticides, and building physical barriers to prevent contamination from neighboring farmlands. This scheme was launched with the aim to reduce the area of standard rice cultivation by 1m rai (160,000 ha) by 2022. Thus, a shift to organic farming practices in emerging economies offers lucrative growth opportunities to market players.


Excessive consumption of sodium nitrate causes many health problems such as colorectal cancer, non-Hodgkin lymphoma, heart disease, leukemia, and stomach, ovarian, pancreatic, esophageal, and thyroid cancers. Sodium nitrate is used as a preservative in the production of some processed meats, such as jerky, bacon, and luncheon meats. This can lead toan increase inthe risk of heart disease. Nitrates can also affect the way body uses sugar, which may develop diabetes. These health-related risks of excessive use of sodium nitrate can be a restraining factor for the global sodium nitrate market.


Rapid changes in consumer tastes and preferences in recent years, along with the changing lifestyles,have created a high dependency on convenience snacks such as hot dogs and bacon. The trend of consuming convenience snacks took place in western countries and has spread in other regions rapidly.

Based on grade, the global sodium nitrite market has been divided into food-grade and industrial grade. The food-grade segment accounted for the largest market share in 2020 and is expected to rise at a decentrate during the forecast period. The increasing product demand from the food industry for food preservation is likely to drive the demand for foodgrades. 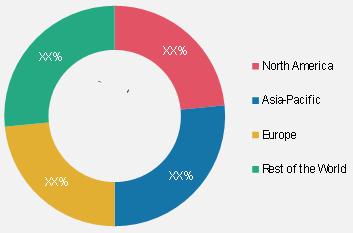 By region, the global sodium nitrite market has been divided into North America, Europe, Asia-Pacific, and the Rest of the World.North America held the largest market share in 2020. Asia-Pacific is projected to exhibit the highest CAGR during the review period.


Asia-Pacific is expected to grow at the fastest pace during the forecast period. The growth of the sodium nitrite market in the Asia-Pacific region is anticipated to be driven by various factors, with countries such as China, Japan, and India are majorly driving the growth owing to several factors such as rising per capita disposable income coupled with a shift in taste and preference for international food cuisines. China has accounted for the significant market share in the Asia-pacific sodium nitrite market in 2020 and estimated to retain its dominance throughout the forecast period.

The market comprises tier-1, tier-2, and local players. The tier-1 and tier-2 players have reach across the globe with diverse product portfolios. Companies such asBASF SE (Germany)and Shandong Haihua Group (China)dominate the global sodium nitrite market due to product differentiation, financial stability, strategic developments, and diversified regional presence. The players are focused on investing in R&D. Furthermore, they adopt strategic growth initiatives, such as expansion, product launches, joint ventures, and partnerships, to strengthen their market position and capture a large customer base.


To identify and estimate the market size for the global sodium nitrite market segmented by gradeand application by value (in US dollars). Also, to understand the consumption/ demand created by consumers of sodium nitritebetween 2021 and 2028


To identify and infer the drivers, restraints, opportunities, and challenges for the global sodium nitrite market


To provide a detailed insight on the major companies operating in the global sodium nitrite market. The profiling will include the financial health of the company past 2-3 years with segmental and regional revenue breakup, product offering, recent developments, SWOT analysis, and key strategies.

What is the growth rate of the global sodium nitrite market?

The global sodium nitrite market is projected to register a CAGR of ~3.9% over the next sevenyears.

Who are the key players in the global sodium nitrite market?

Which region has the largest share in the global sodium nitrite market?

Which region has the highest growth rate in the global sodium nitrite market?

Asia-Pacificis expected to register the highest CAGR during 2021– 2028.

The global sodium nitrite Market is projected to record a CAGR of 3.9% during the forecast period...