Smart Elevator Market Research Report, by Type (Passenger, Freight and Fire-proof), by Component (Maintenance, Control, and Communication), by Service (Installation, Modernization and Maintenance), by Speed and by Application - Forecast till 2027 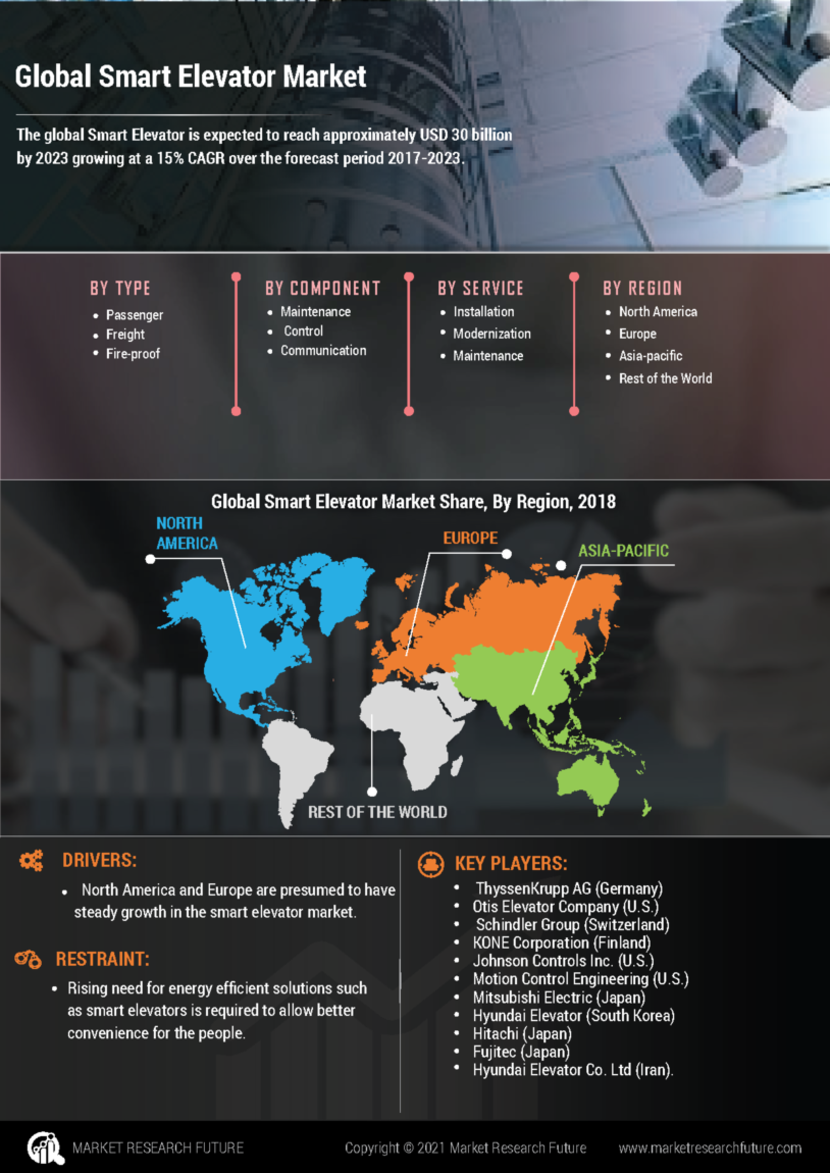 The Smart Elevator Market is expected to reach approximately USD 30 billion by 2023 growing at a 15% CAGR over the forecast period 2017-2023.

Rapid increase in urbanization has created a positive impact on the development of smart projects such as smart cities in the emerging economies. As more number of people living in the cities has encouraged the builders and contractors to build taller buildings in the urban areas which eventually increases the demand for the elevators.

Populated cities have tall buildings, generally used for offices as well as residential purposes, which can cause inconvenience for the general public to wait for a longer time in lifts which increases the waiting time and operating costs of elevators. Rising need for energy efficient solutions such as smart elevators is required to allow better convenience for the people.

However, with advent of technology, the elevators installed in commercial and residential buildings are equipped with smart solutions such as destination dispatch, facilitated at multi-elevator buildings, the number of people or passengers being informed and offers to select and travel-specific floor  to halt to turn up for their vehicles which comparatively reduces the waiting time. Destination dispatch technology being used in multi-storey buildings such as 20-25 floor buildings where the panel buttons are at present at the lobby, rather than in elevator. The advanced system identifies the traffic arrangement and adjust the number of elevators at the lobby, and engage the certain elevators at higher floors, which reduces the traveling and waiting times during the peak period of business hours. On the flip side, implementing these smart solutions on a large scale require huge investments which eventually, regarded as a challenging factor for the smart elevator market.

The smart elevator market is differentiated by type, component, services, speed and application.

By type, the market is sub-segmented into passenger elevator, freight elevator and fireproof elevators. The component segment consists of maintenance, control system and communication system. The control sub-segment is further divided into access, elevator, sensors and security. Depending on the speed, market is categorized as low-speed, fast-speed, high-speed and super-speed.

The application based smart elevator is segmented as industrial, commercial, institutional and infrastructure, residential, and others.

Geographically, the Smart Elevator Market is segmented into four different regions namely North America, Asia Pacific, Europe, and the Rest of the World.

North America and Europe are presumed to have steady growth in the market. This is due to the region is already equipped with the advanced infrastructure and surging need for energy efficient solution for replacing the prevailing elevators with the sophisticated technology. Asia Pacific is also anticipated to be the fastest growing region in the market over the forecast period. India, Japan, and China are the leading countries in the market. This is attributed to rapid increase transforming the infrastructure with smart solutions. Additionally, India is considered to be the fastest growing economy due to a review of regulation policies of foreign direct investment in real estate and commercial sector.

What would be the smart elevator market valuation by 2023?

The smart elevator market worth to surpass USD 30 billion by 2023.

What would be the CAGR for the smart elevator market during the forecast period of 2018 to 2023?

The smart elevator market CAGR would be 15% during the forecast period covering 2015 to 2023.

Which region would be the fastest growing of the smart elevator market?

Asia Pacific, with its huge scope of growth, would record the highest CAGR during the forecast period.

What are the segments discussed in the smart elevator market report?

The segments discussed for the smart elevator market are type, services, speed, component, and application.

What are the different types of elevators?

Is an elevator technology?

smart elevators are developed with advanced solutions and equipped with security controls such as access control systems, destination dispatching, biometric and touchscreen

Smart Elevator Market Is Presumed To Accrue The Highest Revenue And Is Expected To Reach Over Usd...