The growth of the market is primarily driven by the significant demand for the product in major end-use industries such as automotive, aerospace & defense, construction, consumer electronics, healthcare, and others.
Smart coatings are unique films with predefined properties that make them sense and respond to environmental and other external stimuli. These coatings have self-healing and self-repair properties, which make them suitable for corrosion protection, material protection, and other surface improvement applications. These coatings are made of programmable materials with a variety of physical, chemical, electrical, and mechanical properties. The materials can respond to changes in pressure, chemicals, heat, and other stimuli. They offer functions similar to normal coatings, such as protection and decoration, as well as unique functions based on environmental stimuli.

The growth of these industries can be attributed to the rapid industrialization across the globe. The fast-paced urbanization in the emerging economies such as India, Thailand, Indonesia, and Brazil as well as the infrastructure development in the developed economies has led to an increase in the number of construction activities. This is expected to drive the demand for smart coatings in the construction industry. For instance, according to the US Census Bureau, the overall construction spending in the US stood at USD 1,246,000 million as of 2017. The growing adoption of smart coatings in the aerospace & defense industry is another major driver of the global smart coatings market.

High investments in R&D for the development of new smart coatings is expected to increase the application of smart coatings. For instance, researchers at the NASA Kennedy Space Centers Corrosion Technology Laboratory have developed a smart, environmentally friendly coating system, which can be used for early detection and inhibition of corrosion as well as self-healing of mechanical damage without external intervention. This coating can detect the onset of corrosion in the coated substrate and respond autonomously to control it. The applications where the coatings can be used include bridges, automobiles, ships, pipes, machinery, and airplanes.

However, the high cost and the stringent regulations may hamper the market growth during the review period 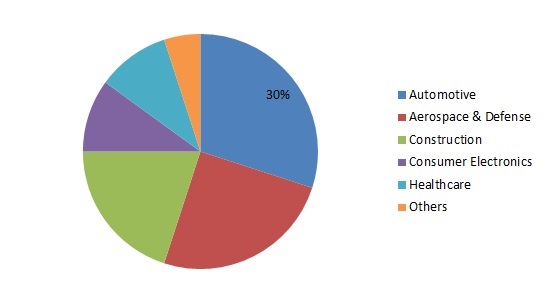 The global smart coatings market, by region, has been segmented into North America, Europe, Asia-Pacific, Latin America, and the Middle East & Africa.

Asia-Pacific accounted for the largest market share in 2018 on the backdrop of high demand for smart coatings from the major end-use industries such as automotive, construction, consumer electronics, and aerospace & defense. Rapid industrialization and urbanization coupled with growing economy has resulted in significant growth of these end-use industries, which is likely to fuel the demand for smart coatings in the coming years.

Industrialization in Brazil and Chile has resulted in an increase in the number of construction activities, which is expected to drive the product demand in Latin America during the forecast period. The presence of infrastructural hubs in GCC, UAE, and Saudi Arabia is likely to propel the growth of the Middle East & Africa market.

At what CAGR is the smart coating market predicted to grow over the forecast period?

What will be the possible market valuation of the smart coating market?

Which region is predicted to dominate the smart coating market?

The APAC region is predicted to dominate the smart coating market for increasing demand from automotive and construction industries, rapid urbanization and industrialization, and growing economy.

Who are the notable players profiled in the smart coating market?

Which factors may restrict the growth of the smart coating market?

Stringent regulations and high cost may restrict the smart coating market during the forecast period.