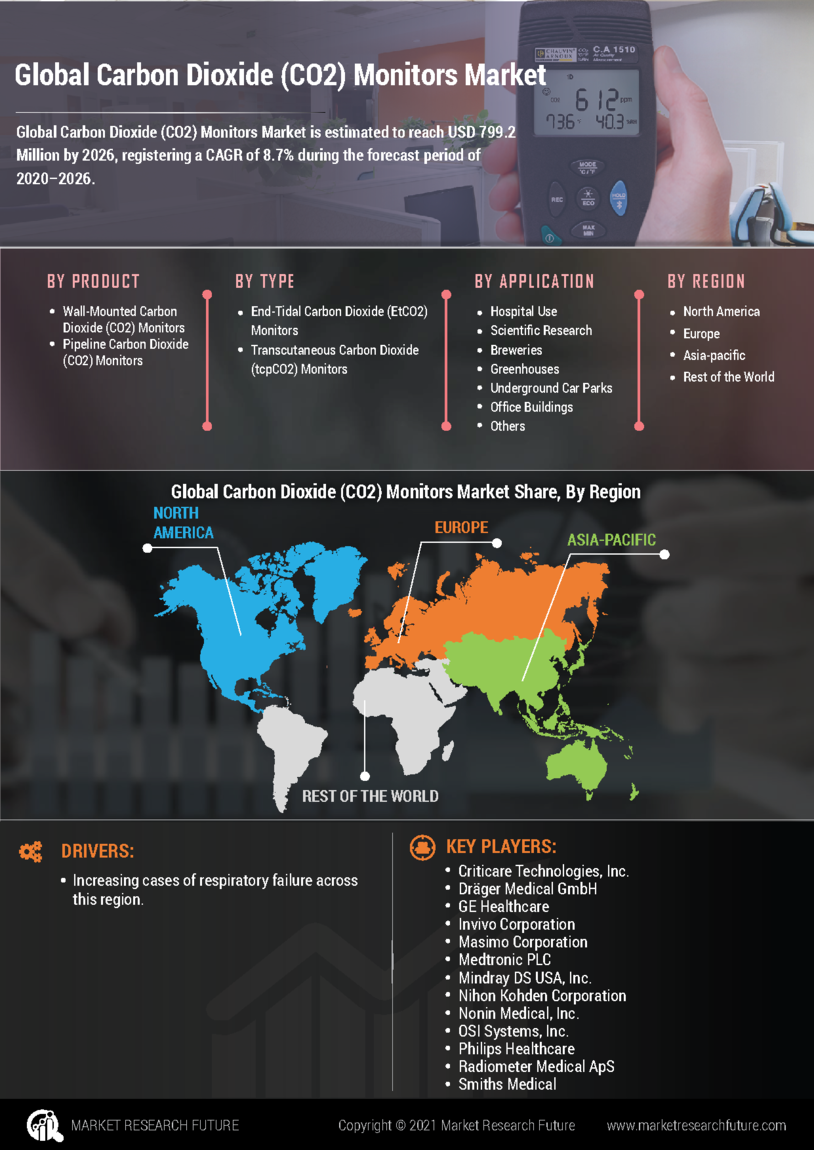 The Carbon Dioxide Monitors Market is estimated to reach USD 799.2 Million by 2026, enrolling a CAGR of 8.7% during 2020-2026. Carbon dioxide screens are electronic gadgets that ceaselessly screen carbon dioxide's presence and immersion level in the climate. The Carbon Dioxide screens are sent in enclosed spaces where the air ventilation is fundamentally poor or insufficient.

The rising well-being risks revealed consistently were because of the unfortunate air ventilation in the work area or at home. The developing populace and urbanization have expanded the number of restricted space structures, bringing about unfortunate air ventilation. The carbon dioxide screens help in the early location of the unsafe gas and report to the client who screens the condition. The Carbon Dioxide screens and other unsafe gas screens in the workplace spaces have worked on the efficiency among the representatives and, in general, the soundness of those representatives.

The accessibility of types in the carbon dioxide sensors or screens has likewise affected the general development of Carbon Dioxide screens as they further develop the general client experience. Hand-held gadgets were progressively utilized for modern purposes as they are helpful in spot identification.

COVID-19 widespread has affected several industries and economic conditions across the globe. During the pandemic, health monitoring devices were gaining popularity and so are health supplementary diets and air quality sensors and monitors. Essential parameters were carried out to control the airborne infections and widespread COVID-19 as the government organizations have imposed stringent laws during the pandemic. On the other hand, the requirement of regular maintenance and installation procedures during the declining economic condition has adversely impacted the growth of the carbon dioxide monitoring industry.

The faster detection of the Carbon Dioxide levels before the saturation levels can save a large number of casualties. Carbon Dioxide monitors are gaining popularity in enclosed offices, schools, and colleges, especially in schools because children lack resistance against the CO2 gases and are prone to get affected very quickly compared to adults.

The advent of novel technologies and their being integrated with the Carbon Dioxide monitors, intimating and displaying required suggestions such as upgrading your HVAC systems, air quality is poor in handheld devices have increased the carbon dioxide monitors market demand.

The increasing urbanization, industrialization, research, and development in the industry are expected to propel the overall growth of the Carbon Dioxide monitors market value in the forecast period. The advancements in the industry feature lightweight device, clear and concise alarming systems to the official representative, longer battery life, compact structure so that there are no additional costs required for the hefty hardware systems, simple operating systems which can be handled by any professional are bolstering the carbon dioxide monitors market value in the recent times.

The developing regions lack awareness regarding the subject and the higher cost incurred for the installation and maintenance of the device are hindering the overall growth of the carbon dioxide monitors market.

The Fixed or wall-mounted Carbon Dioxide detectors are not considered to perform effectively as they require more saturation levels to trigger the alarm, whereas they can only detect the presence of CO2 gas-only within a 5m radius. This factor is hindering the overall growth of the Wall-mounted CO2 detector.

The prevalence of cheap CO2 detectors which have built-in software corrections that assumes the carbon dioxide gas based on the surrounding or background levels doesn’t provide legit data, therefore they are not suitable for industrial purposes. If the room is emptied, the close-up level might be changed to 400ppm, however, the original value would be 4500ppm, such misleading information on the display could be extremely hazardous.

The carbon dioxide monitors have been increasingly deployed in several industrial verticals, especially in enclosed areas where the risk of acquiring poor air quality is higher. Recently, the UK government has released an awareness program and increased the investment in implementing over 300,000 monitors in a portable form in classrooms where the ventilation is generally forced and every classroom will comprise around students. These initiatives are expected to keep the COVID-19 spread under control. The UK government has recommended portable CO2 monitors as they are comparatively efficient in detecting CO2 gas and are extremely convenient for users. The market value of the Carbon Dioxide monitors market is expected to surpass over USD 799.2 million by the year 2026 while registering a CAGR of 8.7%.

North America and Asia-pacific regions are expected to dominate the Carbon Dioxide Monitors market value in the forecast period, owing to the increasing cases of respiratory failures in Asia-pacific regions. Among the two configurations, the mainstream CO monitors help measure the respiratory gas directly from the airway. On the other hand, the growing geriatric population and increasing air-borne infections in North America have propelled the carbon dioxide monitors market value in recent times. With the increasing awareness across the Asia-pacific regions, the market value of the carbon dioxide monitors industry in China is expected to reach over USD 184.5 million by the year 2027 while registering a healthy CAGR of 12.9% during the forecast period.

In 2021, one of the main market players, UPL Ltd, teamed up with Tele sense, a US-based organization, and sent off the versatile sensor innovation, which uses an AI stage that screens a few boundaries, including temperature stickiness and CO2 levels. The joint effort has expanded the general deals rate across the USA. The observing gadget is fundamentally worked to screen the grain stockpiling, private units, essentially inside.

In 2021, the Forensic locators sent off the CO2 screens that consent to the California Assembly Bill AB 841 and are considered the most appropriate screen for the inside, for example, in homerooms, medical clinic wards, exercise centres, and workplaces. The screen has been very gainful in diminishing the COVID transmission and chance of getting an airborne disease.

How big is the Carbon Dioxide Monitors Market?

Who are the prominent players in the market?

What is the major driver of the global carbon dioxide (CO2) monitors market?

Which region is expected to be profitable in the global carbon dioxide (CO2) monitors market?

North America will hold the largest market share during the forecast period.