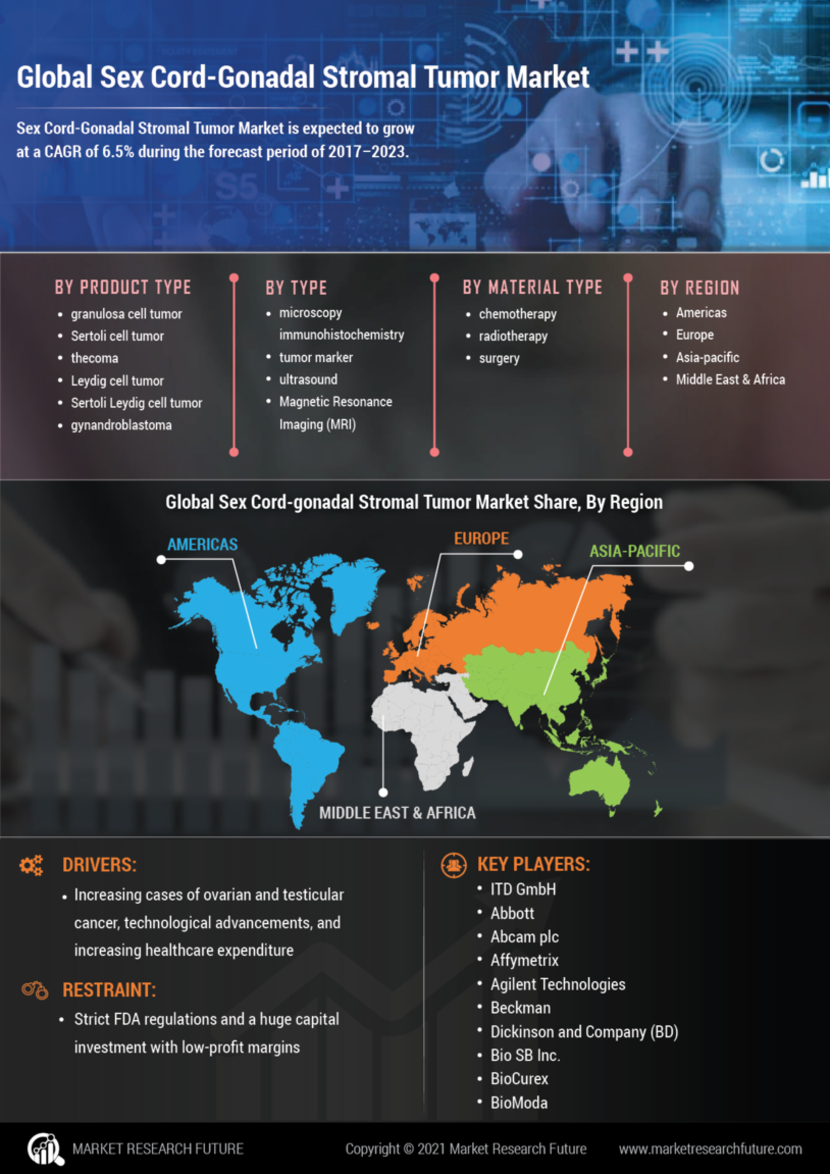 The sex cord-gonadal stromal tumor is a rare type of cancer derived from the stromal component of the ovary and testis. This tumor comprises granulosa, thecal cells, and fibrocytes. Sex cord-gonadal stromal tumors are mostly of seven types, namely, granulosa cell tumor, Sertoli cell tumor, thecoma, Leydig cell tumor, gynandroblastoma, Sex Cord Tumor with Annular Tubules (SCTAT), and Sertoli Leydig cell tumor. In humans, this type of tumor accounts for 8% of the ovarian cancers and around 5% of testicular cancers.

It is noted that the increasing cases of ovarian and testicular cancer, technological advancements, and increasing healthcare expenditure are the key factors driving the sex cord-gonadal stromal tumor market.

It is estimated that the sex cord-gonadal stromal tumor market is expected to grow at a CAGR of 6.5% during the forecast period of 2017–2023.

The global sex cord-gonadal stromal tumor market is segmented on the basis of type, diagnosis, treatment, and end-user.

On the basis of end-user, the sex cord-gonadal stromal tumor market is segmented into hospitals and clinics, cancer research centers, research and academic institutes, and others.

According to the data suggested by Eurostat, it is observed that among the EU Member States, the highest value of healthcare expenditure was recorded in Germany in 2014, i.e., EUR 321 billion which is further followed by France with EUR 237 billion and United Kingdom with EUR 223 billion. In the year 2016, the R&D expenditure in the pharmaceutical industry was EUR 35000 million, suggested by the European Federation of Pharmaceutical Industries and Association.

Asia Pacific is the fastest growing sex cord-gonadal stromal tumor market owing to a huge patient pool and development in the pharmaceutical sector. Healthcare expenditure is found to be boosting in various regions of Asia Pacific. As per the data suggested by the Australian Institute of Health and Welfare during the year 2015–2016, the total health expenditure was nearly USD 170.4 billion, i.e., 3.6% higher than the expenditure of 2014–2015.

The Middle East and Africa holds the lowest share of the global market due to slow development, lack of technical knowledge, and poor medical facilities.

What is a Sex Cord-Gonadal Stromal Tumor Market?

A sex cord-gonadal stromal tumor is a rare type of cancer derived from the stromal component of the ovary and testis.

What is the CAGR of the Sex Cord-Gonadal Stromal Tumor Market?

What is the major driver for the Sex Cord-Gonadal Stromal Tumor Market?

The increasing prevalence of ovarian and testicular cancer is the major driver for the global market.

Which is the leading regional Sex Cord-Gonadal Stromal Tumor Market?

What are the leading Sex Cord-Gonadal Stromal Tumor Market players?

Leading players in the Sex Cord-Gonadal Stromal Tumor Market include Abbott, Bio-Rad Laboratories, and Karl Storz, among others.