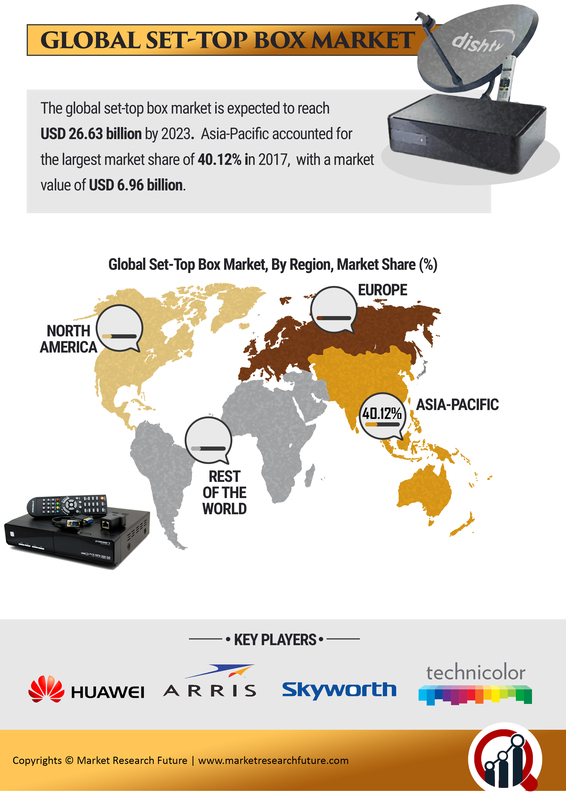 A set-top box is a device that receives and decodes signals from the satellite and converts them to television or internet signals and broadcast them on the screen. The set-top box is used in OTA, television systems, satellite and cable. The Set-Top Box Market facilitates a seamless and excellent experience on television, and consumers can record television programmes and other complex functions through it as well. Technological advancements made this device better than the traditional mode of video watching. Other innovative functions that can be done through the set-top box are home networking, video conferencing, and several others. The set-top box is also called a cable box. This information appliance device contains a TV tuner that sends signals to the television or other displaying devices. The increasing demand for internet and broadband services with on-demand video and high-quality channels affects the Set-Top Box Market Demand. The digitalization mode of changing by the viewers and customers demand entertainment through television and internet is boosting the Set-Top Box Market. The demand for OTT platforms is also a major factor in boosting the market. The number of tech-savvy are increasing, which is creating awareness among consumers. The shift from analogue TV to digital TV has increased the Set-Top Box Market Trends. From 2017 to 2023, the market will register a CAGR of 7.2%, with a value of USD 26,630.4 million. The shift of digitalization has increased the consumption of OTT and VoD platforms.

The pandemic impacted the Set-Top Box Market negatively. The film and entertainment industry does not get solely affected, but due to the impact on the distribution channel, the market got affected. During the outbreak, people were made to sit at home for several days, increasing the TV broadcasters and people shifting the mode of the medium. Still, the impact varies depending on the region. Some regions positively impacted the outbreak, whereas others faced low-profit margins. With the improvement in the situation, the Set-Top Box Market is expected to regain its market share and emerge as a valuable market.

Chief Factors Existing in the Market


Increasing penetration of smart television and rapid advancements in the digital broadcasting industry is expected to propel the demand for set-top boxes across the globe. The growing popularity of internet medium of entertainment and OTT platforms has demanded the key players to introduce OTT based set-top box devices for the competitive edge in the market. The growing urbanization, digitalization, and economic development in Malaysia, India, and China fuel the Set-Top Box Market Demand. With time, among the consumers, social media platforms are increasing, which enhances the demand for high definition video quality. The low cost of TVs and cost-effective internet-based set-top box devices propels the Set-Top Box Market. The demand for video quality and proliferation of technology has motivated the market to insert innovative features in the set-top box, which boost the market.


According to Set-Top Box Market Forecast, the industry faces a lot of troubles due to the OTT platforms. Online streaming services such as Ullu, amazon prime, Netflix, and others are becoming popular among millennials due to the originality and easy assessment of the programmes. The investment to bring new features in the set-box devices are the biggest challenge for the market. However, many set-top box services collaborate with the OTT platforms to gain market value.


The collaboration with the OTT platforms and manufacturers adding new Set-Top Box features forms new opportunities. The shifting of analogue to digital medium and availability of set-top boxes with a cost-effective way with high-quality video are forming new opportunities for the upcoming key players.


The growing use of online streaming sites and easy subscription to those services with affordable prices limits market growth. The OTT services provide live streaming of entertainment and sports with advanced technology restraining the Set-Top Box Market. The video quality and affordability of over-the-top services are hindering the market from further growth. The key players investing in the market should closely observe the factors of the market.


The cumulative evaluation of the Set-Top Box Market depicts the market's future development based on the current scenario. The market's growth depends on several factors that are impacting the market. The Set-Top Box Market Opportunities and drivers propel the growth to reach a profitable value. In comparison, the restraining factors and challenges are limiting the market growth; the market is adapting to newer ways to overcome all the challenges.


The Set-Top Box Market is divided into Internet Protocol TV, Digital Terrestrial Television, Satellite, Cable, Over-The-Top Content, and Others based on the product type segment. People demanding high-quality shows and modes for recording the shows to view later increase the satellite segment. Television is one of the key elements of setting up the box industry, and the show recording facility by the setup box fuels the market's growth. Viewers get the opportunity to record it in real-time and watch it later. The segment satellite is expected to hold the largest CAGR among all of these as it registered 27.8% in 2017 with USD 4.884.1 million.


The set-top box market is bifurcated into High Definition, 4K, and Standard Definition based on the segment content quality. The high definition segment is expected to register the largest CAGR in the upcoming period. In 2017, it held 41.5% of the Set-Top Box Market Share and will upgrade to 5.8% CAGR near future. Many set-top boxes are coming to the market with over the top picture and video quality which increases the high definition segment.


The service segment is segregated into Managed Services and interactive services. The managed services are further bifurcated into Testing, Repairing, Screening and the Interaction Services has been sub-segmented into Video on Demand, High-Speed Internet Television and Video Conferencing. People are getting more inclined towards the internet, due to which the interactive service segment holds the largest share. In 2017, the segment accounted for 62.25% with a value of USD 10.956.7 million and was expected to register 8.4% CAGR.

The set-top box market is studied in Europe, Asia Pacific, North America and other parts. In 2017 the Asia pacific region held a 39.52% market share, and it is expected till 2023, it will account for 8.8% CAGR, which makes the Asia pacific the largest hub for the Set-Top Box Market Growth. The huge population of the Asian region depends on TV for entertainment which pushes the market further. Countries like India and China are adapting to set-top boxes for entertainment. The high definition viewing and smart and digitally innovative TVs increase the set-top box market. The presence of several set-top box companies in India and the use of smart television in the region, and the region's high population fuels the market's demand. Around the year 2019, India registered 69.30 million subscribers. Other regions are also contributing to the market.

At what CAGR is the global set-top box market projected to grow during the forecast period?

What will be the valuation of the set-top box market during the forecast period?

Which region will drive the global set-top box market?

The Asia Pacific will lead the global set-top box market.