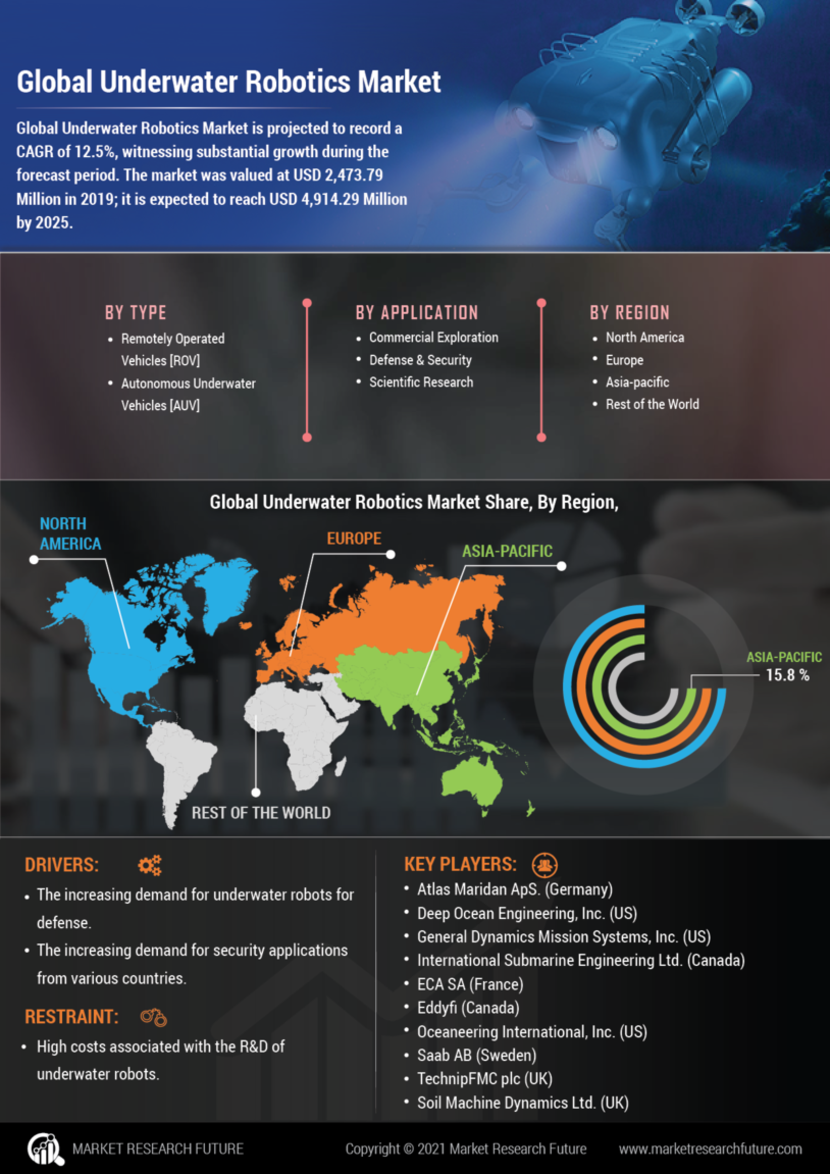 Global Underwater Robotics Market is projected to record a CAGR of 12.5%, witnessing substantial growth during the forecast period. The market was valued at USD 2,473.79 Million in 2019; it is expected to reach USD 4,914.29 Million by 2025.

With the advancements in technology, the adoption of robots has increased across various industries. The global underwater robotics market had registered a value of USD 2473.79 in 2019 and is projected to record a CAGR of 12.5% during the forecast period, 2020–2025. Underwater robotics can be defined as the use of bots or autonomous vehicles within water bodies to gain insights about natural resources, for surveillance, and other industrial and commercial processes. The increasing demand for underwater robots for defense and security applications from various countries is one of the key factors driving the growth of the global market. Furthermore, countries like the US and China have invested in underwater robots to strengthen their security and maintain high surveillance over their maritime borders. In 2016, the United States Department of Defense invested around USD 600 million for the development of unmanned underwater vehicles to be used between 2016–2020. Similarly, in December 2019, China had deployed 12 underwater drones, Sea Wing Gliders, in the Indian Ocean, which were used for monitoring the activities of the naval forces of neighboring and other countries.

These machines are developed and designed to perform several tasks such as working in challenging environments within the water bodies, such as oceans, lakes, and rivers, where the safety and accessibility of divers are compromised. Additionally, the increasing demand for underwater robots for underwater archaeology, maritime security, and marine biology applications is also fueling the growth of the market. Furthermore, the oil & gas industry is also using these systems and machines to increase the safety of the workers and gather informative and precise data associated with the resources from the ocean. Similarly, the growth of undersea exploration for minerals, the rising investments and adoption of the underwater robotics technology by the military and defense sector, scientific research, commercial exploration, and other industries for inspection, navigation & communication, surveillance, intelligence, and underwater repair and maintenance are some of the factors which are expected to drive the market growth during the forecast period.

North America dominated the global underwater robotics market in 2019 due to the presence of various companies in the region and high investments made by the military and defense agencies in underwater robotics. However, the Asia-Pacific region is considered the fastest-growing market, which is projected to register a CAGR of 15.8% during the forecast period due to the increasing investments made by the countries in the region to strengthen their military forces. 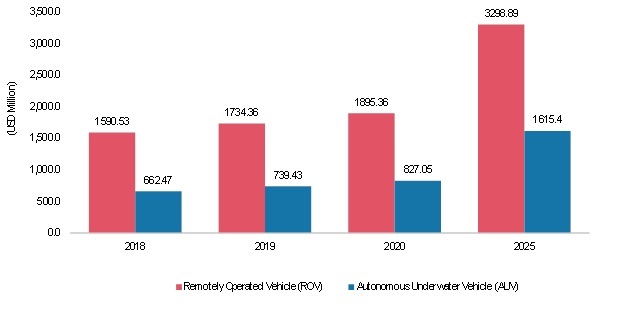 For this study, the type segment of the underwater robotics market has been divided into remotely operated vehicles (ROV) and autonomous underwater vehicles (AUV). A remotely operated vehicle (ROV) is an underwater vehicle which usually tied to a ship using a series of cables and is used along with a tether management system (TMS). These cables transmit commands and control signals between the operator and the ROV enabling remote navigation of the vehicle. The growth of the ROV segment is attributed to the rising offshore deep-sea oil and drilling industry due to its need to perform undersea operations, such as equipment assembling, drilling, underwater repair, and maintenance.


Key Questions Addressed by the Report

What is the predicted revenue generation of the underwater robotics market?

The global underwater robotics market is poised to record a market value of USD 4.2 Billion by 2023.

At what growth rate is the underwater robotics market evolving?

The global underwater robotics market is maturing at a whopping 13.06% CAGR over the review period of 2017 to 2023.

Who are the major market giants operating in the global underwater robotics market?

Which type segment of the underwater robotics market is observing the fastest growth?

The autonomous underwater vehicle (AUV) segment is expected to drive market growth over the review period.

Which component segment of the underwater robotics market is expected to witness the highest demand?

The power distribution unit segment is likely to witness the highest demand in the underwater robotics market.

Underwater Robotics Market Is Projected To Attain An Outstanding Valuation Of Usd 4,914.29 Millio...