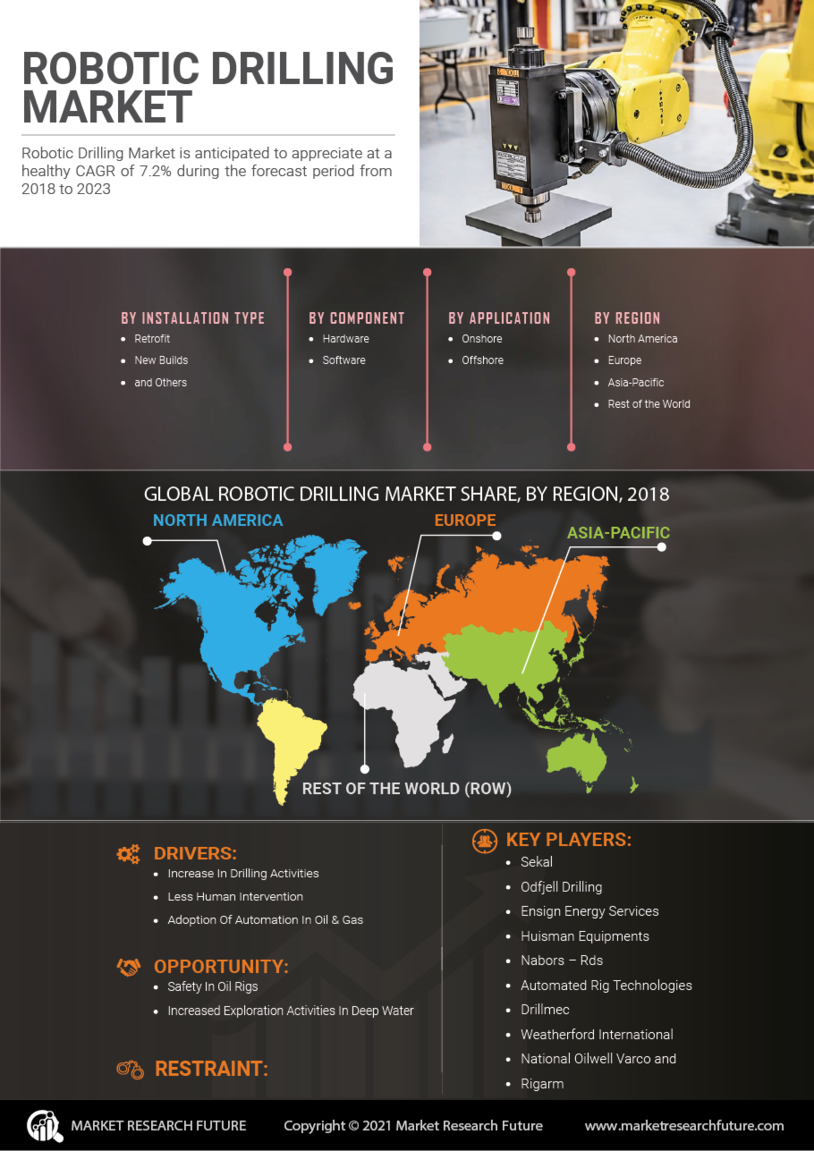 Robotic Drilling Market is expected to achieve a market value of more than USD 940 Bn by the end of 2023, with a healthy CAGR of 7.2% during the forecast period.

Robotic Drilling Market is anticipated to appreciate at a healthy CAGR of 7.2% during the forecast period 2022-2030. Adoption Of Automation In Oil & Gas is expected to be a key driver in global Robotic Drilling industry.

The report on the global robotic drilling market provides a comprehensive analysis of the market in tandem with the forecast between the period of 2022 and 2030. A historical analysis is taken into account along with current trends to assess the position of the market in the report. Additionally, the various drivers, opportunities, restraints and other vital factors have been expounded in the report. Various segments of the global market have been analyzed to their fullest extent in an effort to provide a detailed view of the market in its entirety. Segmental analysis of the market has been performed on the basis of installation type, component, application, and region. Several key competitors are included and profiled in the market to provide a competitive assessment of the market.

Robotic drilling has established itself as a revolutionary robotic technology which has significant applications in unmanned drilling operations. Robotic control systems for drilling help to facilitate seamless operations between drilling machines in a safe manner which also reduces the scope for human error.

Presently, there is a lack of interoperability of rig control systems which restraint market growth. Technical advancements are expected to help mitigate this to a certain extent in the coming years.

Market Research Future has initiated the consolidation of the global robotic drilling market report with a relentless pursuit for vast amounts of information about the market. Raw data extracted from primary interviews with key level executives of leading business organizations participating in the global market combined with data from public sources such as industry journals, authenticated databases, white papers, and company reports are primary and secondary sources of raw data that are used to cover every detail during analysis. Market size estimation for the forecast period has been determined using both top-down and bottom-up approaches. Once all data is gathered, MRFR's expert data analysts provide insightful observations using years of industry experience. Consolidation of all obtained information is performed to present a concise and intelligent report on the market for the forecast period from 2022 to 2030.

How Big is Robotic Drilling Market expected to expand?

Robotic Drilling Market is expected to grow at a CAGR of 7.2% during the forecast period.

Who are top key players in the Robotic Drilling Market?

What factor boosts the demand for robotic drilling across the globe?

Robotic drilling has established itself as a revolutionary robotic technology which has significant applications in unmanned drilling operations. Robotic control systems for drilling help to facilitate seamless operations between drilling machines in a safe manner which also reduces the scope for human error.

What are the segments in the report, with respect to component?

Component-based market segments covered in the report are hardware and software.

State some of the growth opportunities for the market during the forecast period?

Robotic drilling has several opportunities on the horizon which are projected to assist market growth in the near future. Increasing deep water exploration activities are expected to increase adoption as manned operations in deep water is highly unsafe.