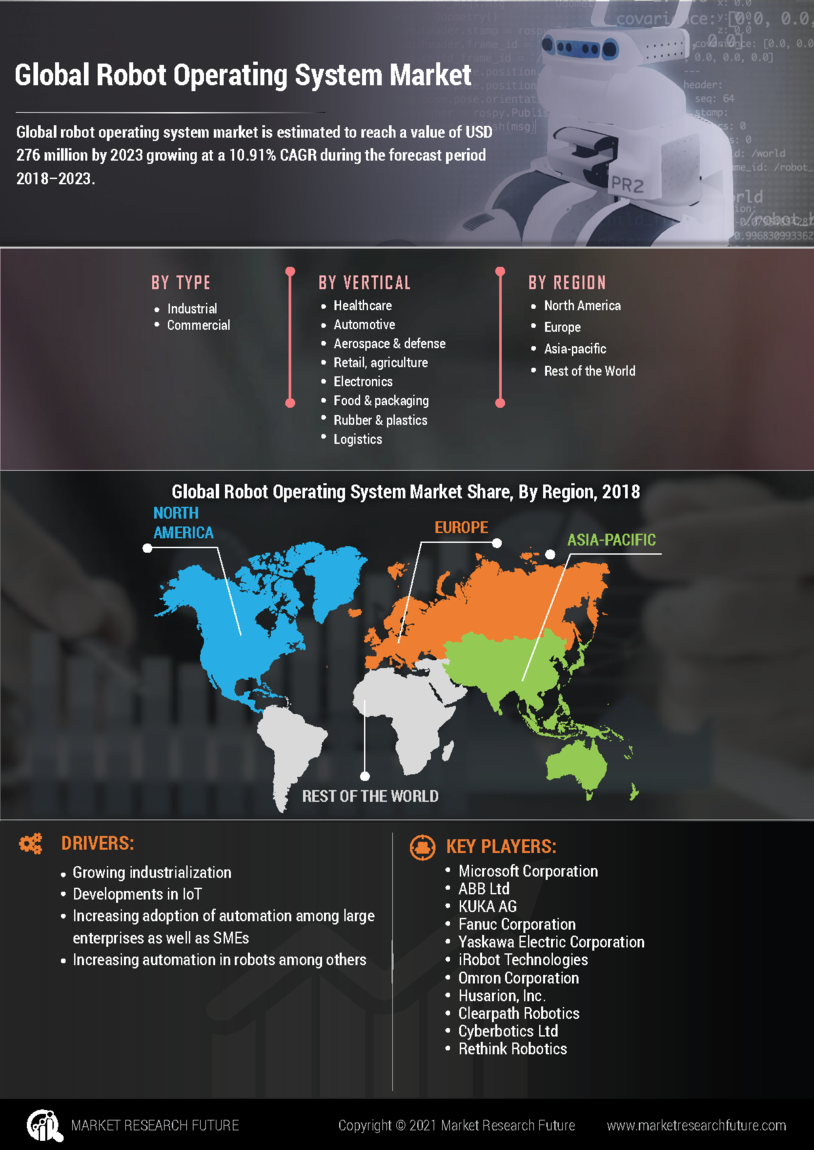 Robot Operating System is an open-source framework that programmers and manufacturers use when developing robot software programs. This framework includes many components. These are:


Programmers and manufacturers need all of these components if they want to develop the structure and codes needed to manufacture the brains of these robots. These professionals find that the components allow them to build specific robots that can perform certain specialized tasks and functions that would be too boring or dangerous for humans to do.

These programmers are able to modify the components using programming languages like Linux. Therefore, they can connect components in innovative and radical new ways. This allows them to build customized and specialized robots.

COVID-19 has done more to push the world on the digital track than any other development in the late 20th and early 21st centuries has. Concepts like remote working and social distancing became commonplace and accepted.

The robot operating system market was one of those markets that actually benefited from COVID-19 and its consequences. Manufacturers were using robots to perform many tasks that couldn’t be done remotely.

Also, robots played a key role in performing many tasks that were repetitive and/or dangerous. Therefore, productivity increased without endangering humans or sacrificing the quality of the finished goods.

Many SMEs and large companies have also been automating key manufacturing functions. This was a trend that began pre-COVID-19 but the pandemic accelerated it.


As more and more manufacturers around the world adopt smart manufacturing concepts in various aspects of their manufacturing processes, they are finding that they need to use robots much more often.

This is driving growth in the robot operating system market. It’s also creating many opportunities for this market because it’s prompting companies that make these robots and robot operating systems to invest heavily in research and development. The result is a new generation of robots that are more productive, can do many more tasks, and have more innovative applications.


The main factor that’s holding back the robot operating system market growth is the fact that anyone can access it and modify it as they want. This poses security challenges since it compromises the integrity of the data in these systems, and eventually, the systems themselves.


Perhaps the greatest challenge that companies in the robot operating system market face is protecting the integrity of the information and data that already exists in these systems.

Omron Corporation is a major player in the global robot operating systems market. It has become an industry leader and has managed to create a sustainable competitive advantage by investing heavily in research and development.

The company was able to develop a new generation of robots that are technologically advanced and have more innovative and useful applications. Omron Corporation is now one of the leaders in the industry.

This segment can be grouped as follows:

There are two categories of commercial robots:

This segment can be grouped as follows:

The global robot operating systems market can be grouped into the following geographic regions:

The following countries belong to the North American region:


The following countries belong to the European Union

The following countries belong to the Asia-Pacific region:

The following regions belong to the rest of the world:

The North American region currently holds the largest robot operating system market share of all of the regions in the world. The reasons for this are that manufacturing as an industry is very established in this region. It’s especially true in Canada and the United States of America. It’s also increasingly becoming true in Mexico.

Both The United States of America and Canada have entered the Industry 4.0 phase of manufacturing. This phase is also known as smart manufacturing. Because it involves many complex processes, it necessitates the use of industrial robots that are capable of machine learning.

Also, most of the world’s largest robot operating system manufacturers are located in the United States of America. These companies receive huge grants from the American government to develop the latest and most advanced robotic technologies. The result is robots that are more productive, more efficient, and have more innovative applications in manufacturing.

Canada is fast jumping into Industry 4.0 manufacturing. That’s why the government is trying hard to attract the types of companies that do smart manufacturing to the country. Also, the Canadian government is actively encouraging industrialists to build more robot operating systems plants.

These are the reasons why Canada holds the second-largest robot operating system market share in the North American region. Mexico comes in third place in market share.

The European Union holds the second-largest robot operating system market share of all of the regions in the world. It held this position in 2018 and is expected to continue this trend for the time period that this report covers.

What’s accounting for this higher market share is the fact that manufacturing companies in this region are transitioning to smart manufacturing fairly quickly. This means using robots and the Internet of Things (IoT) more often. The robots and IoT technologies that these companies do use are much more technologically advanced than previous generations were.

The automotive industry is also strong throughout the European Union. Smart robots are required to make the newer generations of technologically advanced cars. This is a key driver of growth in the robot operating systems market in this region.

The Asia-Pacific region is expected to register the highest robot operating system market growth rate of all of the regions in the world. The reasons why are that the nations in this region are industrializing and urbanizing rapidly. Therefore, they want and need the latest in robotics technologies to continue to remain competitive and profitable on the global level.

Another key reason why this region is registering the highest market growth rate for the time period that this report covers is that the automotive industry is growing at an exponential pace throughout the Asia-Pacific region.

For example, India’s government recently entered into a joint venture with Japan. The terms of the agreement specified that the two countries would work together to manufacture 544 smart robot soldiers by 2023.

The global robot operating system market is highly competitive. The reason is that the market is registering a high growth rate and is fairly lucrative. There are also a few barriers to entry into the market. Therefore, larger companies with more financial resources are seizing upon the opportunity to enter the market.

Companies find that they must engage in research and development to develop a new generation of robots that are technologically advanced and more productive. They must also be more creative and innovative with their marketing campaigns.

These companies are also entering into strategic partnerships with other companies that are succeeding in the market. The objective is to combine the knowledge and resources of the resulting company to develop better robots that will sell better.

Companies also find that mergers and acquisitions accomplish the same goals and lead to the same results that strategic partnerships do.

ABB: Ltd is a major company in the global robot operating systems market. It has become a key industry leader by investing heavily in research and development. Therefore, it was able to develop a new generation of superior robots and robotic technologies.

What is the projected market value of the global robot operating system market?

The global robot operating system market is expected to record a substantial market valuation of 0.7 Billion by 2030.

What is the estimated growth rate of the global robot operating system market?

The global robot operating system market is projected to register a moderate 7.30% CAGR in the forecast period.

What is the type segment of the global robot operating system market expected to witness the highest growth?

What is the vertical segment forrobot operating system global market expected to witness the highest growth?

The electronics segment is slated to expand as the fastest-growing segment.