The major drivers of the global market growth including the expansion of transmission and distribution network. Additionally, the demand for smart grid infrastructure to create opportunities for the global recloser control industry. For instance, in 2016, the US Department of Energy (DOE) announced a grid modernization multiyear program plan to convert traditional grid architecture to improve the grid system reliability. This is expected to create opportunities for the installation of electric devices such as recloser control.

The key players operating in the global recloser control market are ABB (Switzerland), Eaton (Ireland), Schneider (France), Hubbell (US), G&W Electric (US), General Electric (US), Noja Power (Australia),  Tavrida (china), Entec (US), Beckwith Electric (US), and SEL (US), among others.

Many major players such as ABB, GE, Siemens, and others are manufacturing recloser control with a high demand from industrial sector and improved efficiency. Such players are actively engaged in contracts & agreements and launching new products as a key strategy in order to offer the best suitable recloser control. For instance, in April 2016, G&W Electric and GE collaborated to develop new integrated recloser solutions including GE’s new Multilin R650 recloser control. However, the high cost of recloser controls in some parts of the world is expected to restrain the growth of the market. 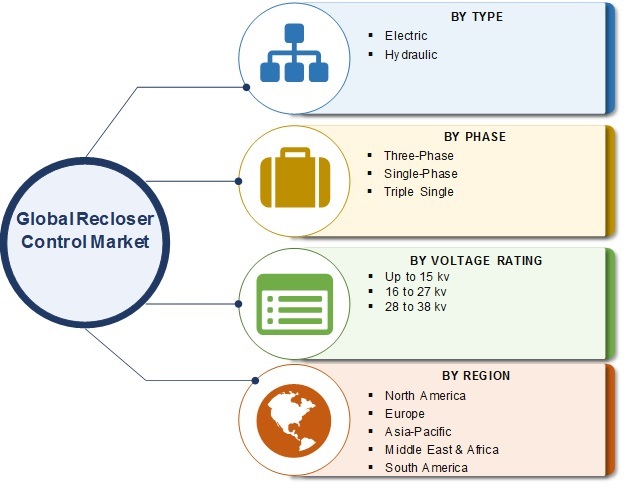 The global recloser control market is expected to grow at a faster rate due to the growing concern for reliable and efficient power supply globally.

On the basis of region, the global market is segmented as North America, Asia-Pacific, Europe, Middle East & Africa, and South America. Asia-Pacific obtains the largest market share due to the installation of new distribution lines, and refurbishment of older distribution systems in the region.

What is expected to be the market value by 2025?

G&W Electric (US), Tavrida (China), Eaton (Ireland), Hubbell (US), General Electric (US), Entec (US), Schneider (France), ABB (Switzerland), SEL (US), Beckwith Electric (US), Noja Power (Australia), are the notable companies in the market.

What makes APAC the leading market for recloser control?

Rising installation of new distribution lines along with the continuous refurbishment of older distribution systems make APAC the leading market for recloser control.

Why is the single-phase popular in the global market?

Single-phase is highly popular in the global market given its rising application in the industrial sector.