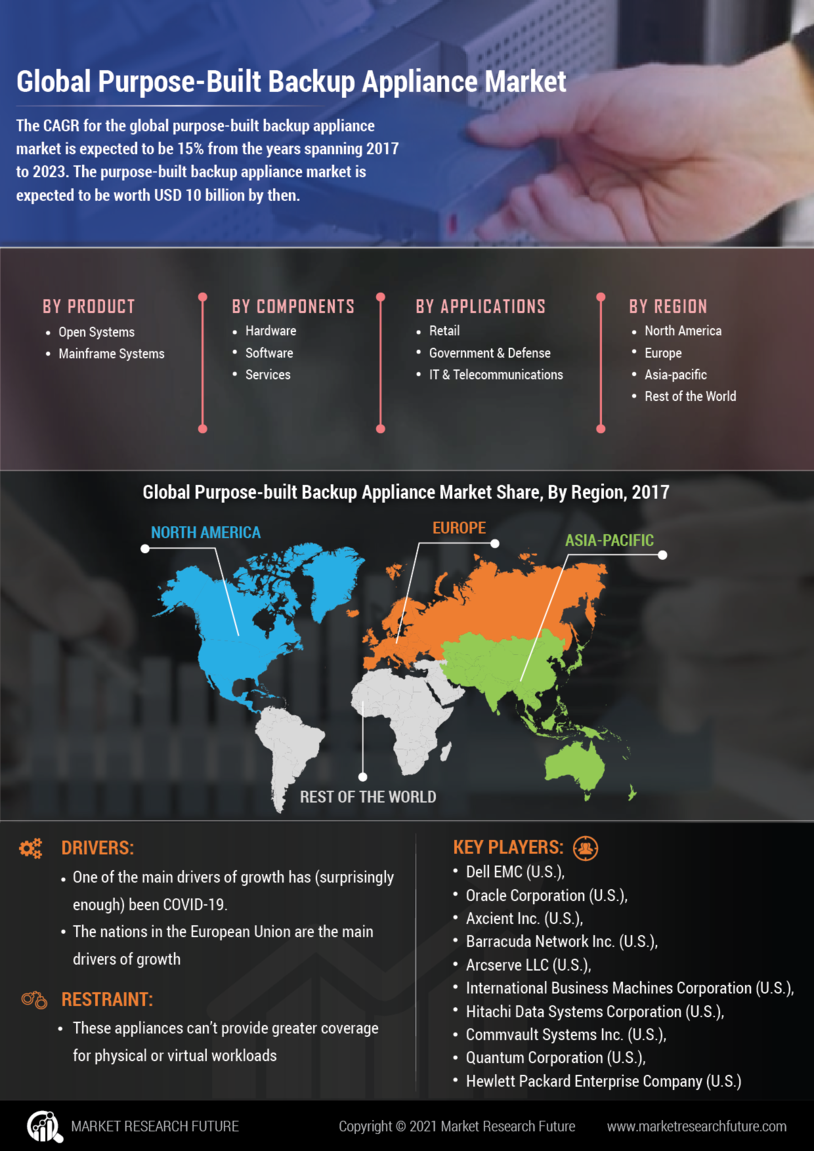 Globally, the size of purpose-built backup appliance market is expected to boost at a CAGR of 15% with a value of USD 10 Billion over the forecasted 2020-2027 driven by the rise in the implementation of PBBA due to the pressing for increased capacity can underpin the expansion of the market

The global purpose-built backup appliance industry is being driven by the continuous advances in backup techniques, a shift to cloud storage and the large information boom. The industry is further boosted by the growing focus of the organizations on data protection and recovery setup. North America is the leading market because of the ever-increasing need for enterprise data storage. Europe is estimated to grow faster due to the government rules and regulations regarding data protection and data security.

COVID-19 became a major issue early last year. At first, it seemed to be nothing more than a nuisance virus. However, the fact that more and more people around the world got very sick because of it and a few people died from it proved that this was clearly not the case. Government and public health officials soon learned that COVID-19 had far-reaching health implications for those who recovered from it.

One is that it could make people who had no family history of diabetes diabetic. It could also cause some people to have strokes. What was worse is that the antibodies that protected the people who got it and recovered disappeared after a few months. This meant that these people could become reinfected with the virus after a few more months had passed. This was especially true of people who had little to no symptoms the first time that they got the virus.

Governments around the world decided to respond by imposing lockdowns and quarantines. These halted many businesses ’ operations and hurt companies in many industries badly. The companies in the purpose-built backup appliance market were no exception. They found that the raw materials that they needed to make these appliances hard to come by. This forced them to pay more for these materials, thus raising their operating and manufacturing costs. They were forced to charge the end consumer more to make up for these losses.


One of the main drivers of growth has (surprisingly enough) been COVID-19. The nations in the European Union are the main drivers of growth in the purpose-built backup appliance(PBBA) market. The governments and businesses in these nations want to make sure that the data that they have is easily available. They also want to make sure that it’s easy to access. These companies also want their remote workers to be able to manage this data and information better.


The increase in demand for these appliances from the European Union has encouraged manufacturers to invest heavily in research and development. The objective is to come up with a new generation of appliances that are easier to manage and operate and are much more efficient at what they do.


These appliances can’t provide greater coverage for physical or virtual workloads. This is what is holding growth back in the  PBBA market.


One main challenge that manufacturers in this purpose-built backup appliance market face lie in making appliances that are more effective and offer the end-user more options while keeping overall prices down for the end-user.

The  market is grouped into the following products:

The market is grouped into the following according to the component:

The market is grouped into the following according to the end-user:

The market is grouped into the following in terms of regions in the world:

The North American region comprises the nations of Canada and the United States of America. This region has the largest purpose-built backup appliance market share of all of the regions in the world. One of the main reasons for this is that most of the information-intensive industries and companies are located in this region. Another reason for this is that purchasing power is highest in this part of the world.

The deduplication rate is also high in this part of the world. The ratio for the deduplication purpose-built backup appliance market in North America is 55:1. This applies to both data that is in the companies themselves and on their cloud networks. This is a very high percentage and explains why the companies in this part of the world are the most productive.

The purpose-built backup appliance market is also expected to grow at a good rate in the European Union. The regional CAGR is high. The market in this region alone was worth USD 250.05 million during the first three months of 2020. Western Europe had the highest CAGR of all nations and regions in the European Union. The CAGR there was 17.2%. It’s expected to stay at this rate for at least the next few years.

The Asia-Pacific region is an important and emerging region for the purpose-built backup appliance market. There are three heavyweight nations in this region. They are Japan, China, and India. Japan is a major country in the Asia-Pacific region because it’s highly industrialized and because it has a developed electronics and IT sector that is growing at a healthy rate.

India and China are significant because of their large populations. This is combined with the fact that the economies in these two nations are growing rapidly. The IT and services sector is growing at a breakneck pace in India. This is creating a huge demand for purpose-built backup appliances in this nation. This region of the world is expected to have the highest regional CAGR for the years between 2017 and 2023, largely because of the fast rates at which the Indian and Chinese economies are growing.

The rest of the world is expected to grow at a more modest rate.

Companies are also finding that they can remain competitive by entering into strategic partnerships with companies that have more knowledge and resources than they do. The resulting companies have more manpower and resources. This enables them to enter into new markets on a strong footing. It also helps them solidify their positions in existing markets. Finally, it allows them to develop new products that they can sell to new and existing markets for new generators of revenue and income.

Companies are finding that the same applies when they merge with/acquire other companies.Dell Corporation is a major company in the purpose-built backup appliance market. It has succeeded by innovation through and investments in research and development. This has allowed it to develop a new generation of products with more useful applications.

The purpose-built backup appliance market is highly competitive. The primary reason for this is that several leading market players are involved in such cases. They are attracted to the market primarily because it’s lucrative and has a high CAGR for the foreseeable future.

Several industries find that they can survive if they invest heavily in research and development. It will allow them to develop a new generation of devices and appliances that are far more effective.

The purpose-built backup appliance market will grow at a CAGR of 15% from 2020 to 2027. The North American region may have the largest market share, but the Asia-Pacific region has the highest regional CAGR.

What are the growth prospects for the PBBA market?

What are the disadvantages of these appliances?

They take up space and require many hypervisors to use.

IT & Telecoms, healthcare, government and defense, and retail companies buy these.